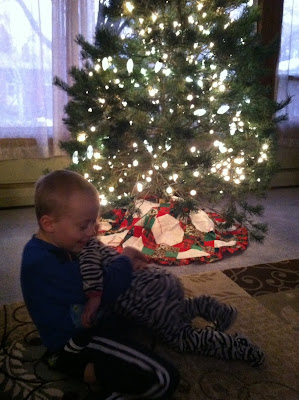 I am so sorry for my lack of posting! I have a bad habit of getting overwhelmed when there is too much to write about, so I just don't write at all. These past two months have been nothing but a long string of events I could write about, with no time to write! So I will try to give a quick synopsis of our Advent and Christmas seasons before the details escape my brain.

We kept Advent pretty simple- by choice and by necessity. The kids were battling colds on and off throughout the entire season, keeping us homebound more often than I planned, but leaving plenty of time for snuggles and story time. We did our annual Jesse tree, watched lots of seasonal movies, baked Christmas goodies, and even managed to squeeze in a handful of fun outings between bouts of sickness. We visited the Christmas Trolley at Lake Harriet, saw a production of A Charlie Brown Christmas, went on a self-guided Christmas light tour, and delivered doughnuts to some of our neighbors for the Feast of St. Lucy.

Then the fun ramped up even more when Grandma and Grandpa Yantes, Patrick and Liam rolled into town on their way to Wisconsin. They stayed with us a couple days and gave the kids their presents. The highlight was a set of Snap Circuits, a genius invention! The kids (and adults!) spent hours creating working electrical circuits, including a light-activated alarm and an AM radio. So cool.

The Yanteses traveled on to Wisconsin for Christmas while we stayed to celebrate with my side of the family. We hosted Christmas Eve at our house after Mass, and my younger brother even admitted that I pulled it off... although we still required that my mom make her traditional Clam Chowder. There are some things I'm just not ready to take on yet.

Christmas morning came reeeeeeally early when Max woke me up at 3:30 am, too excited to sleep. Thankfully, after an hour and a half of not being able to relax, visiting our room every ten minutes, and finally being allowed to check his stocking, he fell asleep in our bed until a more reasonable hour when we all got up and opened presents, ate cinnamon rolls, and got dressed to go to Grandma and Grandpa's house. There we celebrated Max's birthday and had a yummy brunch. So far he loves having his birthday on Christmas! The Radecki cousins came in the afternoon and the celebrations continued! There were legos built, stormtrooper helmets decorated, cookies devoured, and stories read. It was a great day!

Saturday we woke up and spent the morning relaxing while the kids had a chance to play with all of their new toys. Then Paul and I packed up the car for our second annual overnight at the Horse and Hunt Club Lodge with my mom's side of the family. It's such a cozy spot, it just oozes Christmas spirit! We played pictionary and sang carols around the fireplace, and the kids stayed up way too late. Usually I'm in a hurry to get them to bed so I can relax and really enjoy myself, but they were so snuggly and fun to be around, I found that I couldn't motivate myself to do bedtime until after 10:00!

In the morning, we went to the little country church for Mass, had doughnuts for breakfast, and then hit the road for our trip to Wisconsin for the final leg of our Christmas adventure. Are you tired yet? I am, just from writing about it! But it was so worth it. It took about five hours to get to Monica and Glenn's house, which is nothing compared to the road trips we are accustomed to. We pulled in before dinner and were greeted by the whole Yantes clan. We had a little celebration for Kelley's birthday and, per her request, watched "Seven Brides for Seven Brothers" while the menfolk played cards upstairs.

Poor Paul got hit with an awful bug the next day and was down for the count most of the remainder of the trip. We still managed to have a great time playing in the snow, having a candy cane hunt, visiting the local children's museum, and sitting in front of the fireplace. Lucian was our firemaster, closely monitoring Uncle Glenn every time he built a fire, and every day when it would be lit. Audrey and Nathaniel were simultaneously best buddies and worst rivals, but in spite of the many pokes and screams and stolen toys between them, they came out on the other side as great little friends.

As if we were worried that any grass might grow under our feet, we drove home on New Years Eve day almost directly to a New Years party at my friend Jess's house. I dropped Paul and the girls off at home- he was still sick and they were exhausted- and the boys and I went to ring in the new year among piles of friends. The countdown to 2016 took place at 8:00 pm, complete with noisemakers and party hats, and then the families cleared out fairly shortly after that to put kids to bed and ring in the actual new year at home.

Paul and I tucked in the boys, sat down with some chocolate and watched a show until 11:58 (I may or may not have slept through the majority of it). When it was over, he asked, "So do you think we'll make it to midnight?" We watched the clock for two minutes, toasted the New Year, and went straight to bed. Oh the thrilling life of a parent of young kids!

And now to relax for a week until we pack our bags and hit the road again, this time to Mexico for the trip of a lifetime... 5 nights, 8 couples, no children. I'll be telling you all about that when I return. But for now I'll say Merry Christmas, Happy New Year, and blessings on all of you! 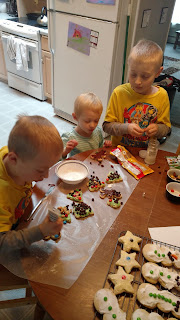 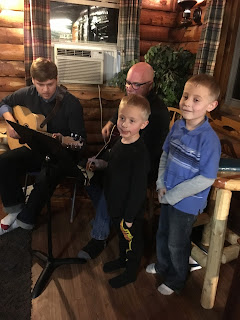 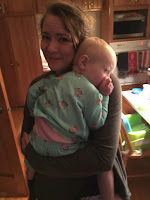 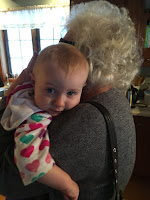 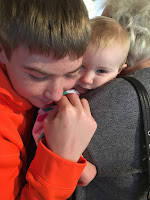 Email ThisBlogThis!Share to TwitterShare to FacebookShare to Pinterest
Labels: celebrations, family, out and about, We are Catholic
Newer Posts Older Posts Home
Subscribe to: Posts (Atom)