My brain has been getting a workout lately, and it feels great! I recently wrote a guest blog post for the Guiding Star Project, a pro-life, pro-woman organization whose mission I wholeheartedly believe in. And then, just for the heck of it, I started another blog to chronicle my thoughts and experiences with homeschooling. I found that I had a lot to say on the subject, and I didn't want to bore you all with that here. But if you feel like you want to read more of my craziness, feel free to check it out! 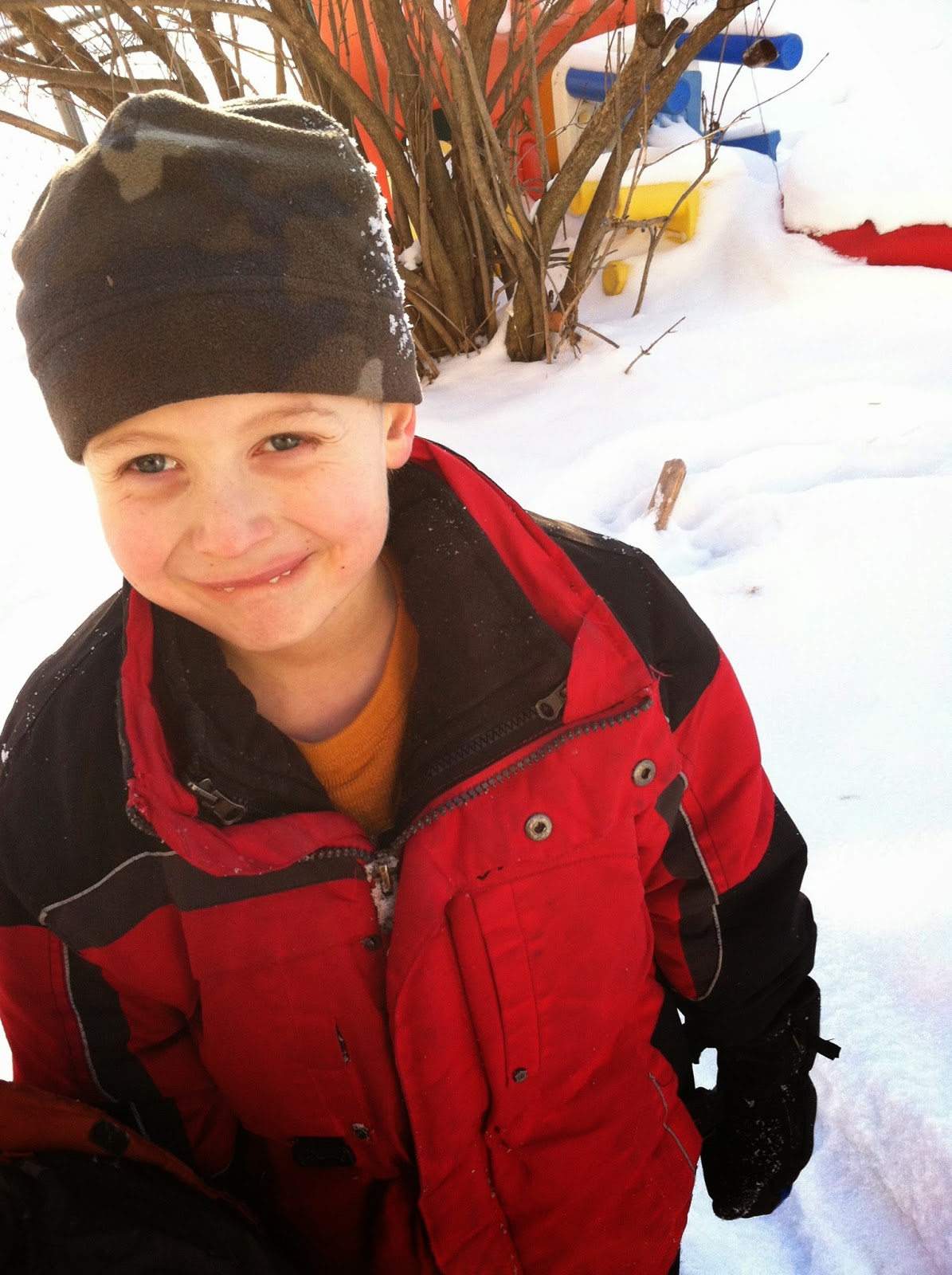 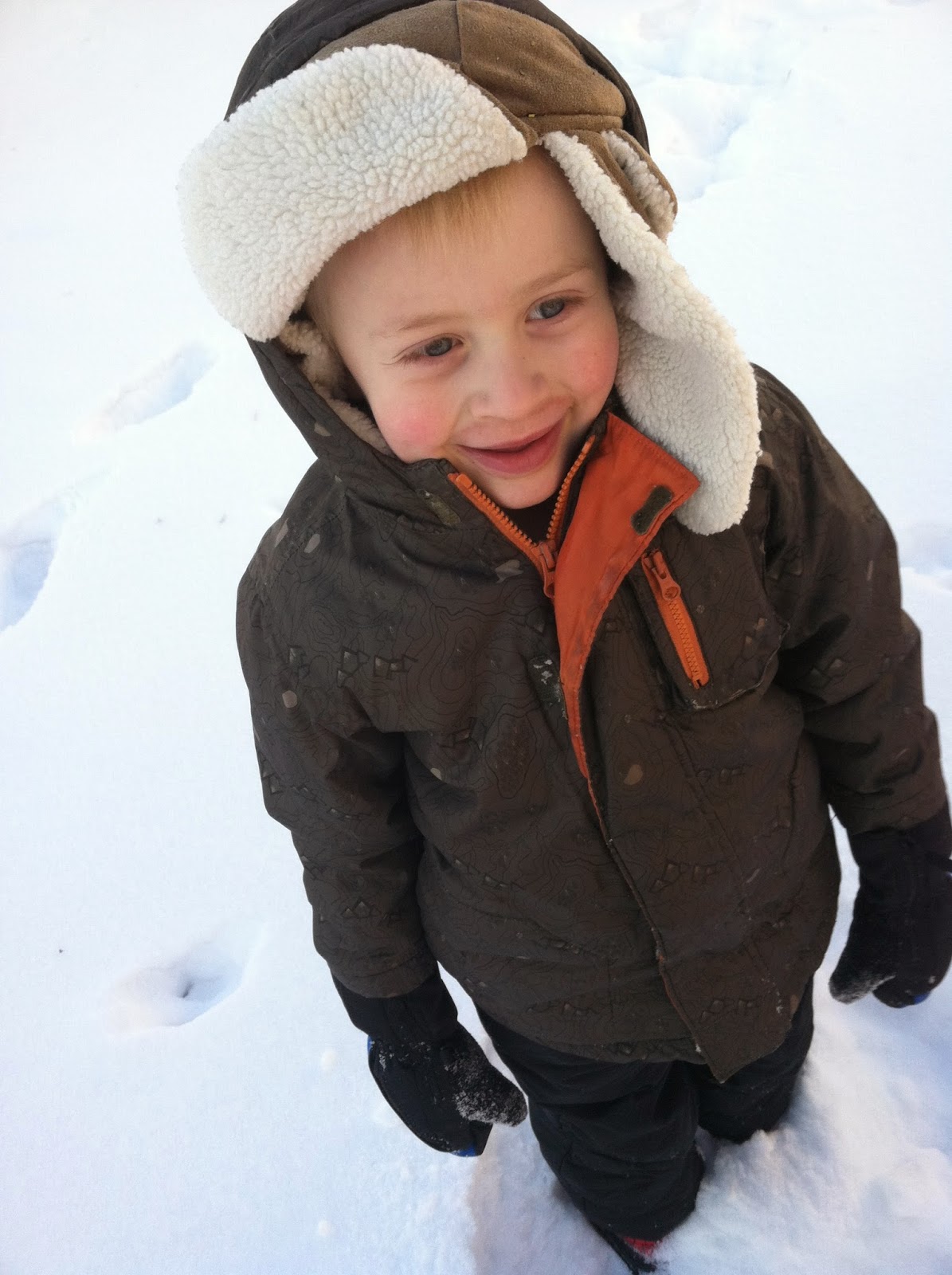 That said, I promise to make a commitment to keep updating this blog as much as I can. I've done a pretty lame job lately, something about homeschooling with four kids kinda eats away at my time... I can't figure it out. But I still want to make this a priority, because I know you all (cough *Megan* cough) want to know what's going on in these parts. So don't give up on me! I'll still be around, if not as regularly as I was when I began this endeavor almost five years ago. 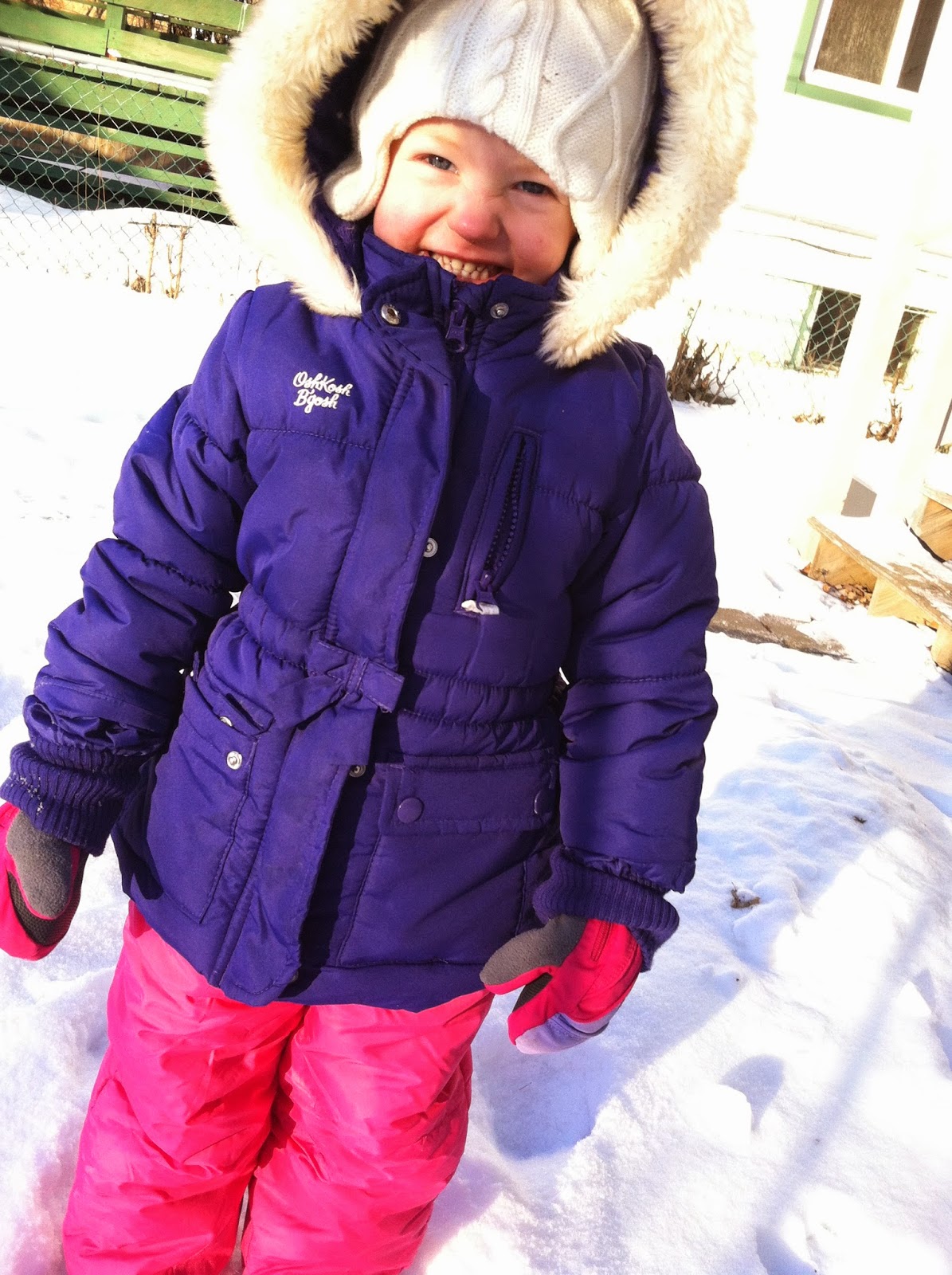 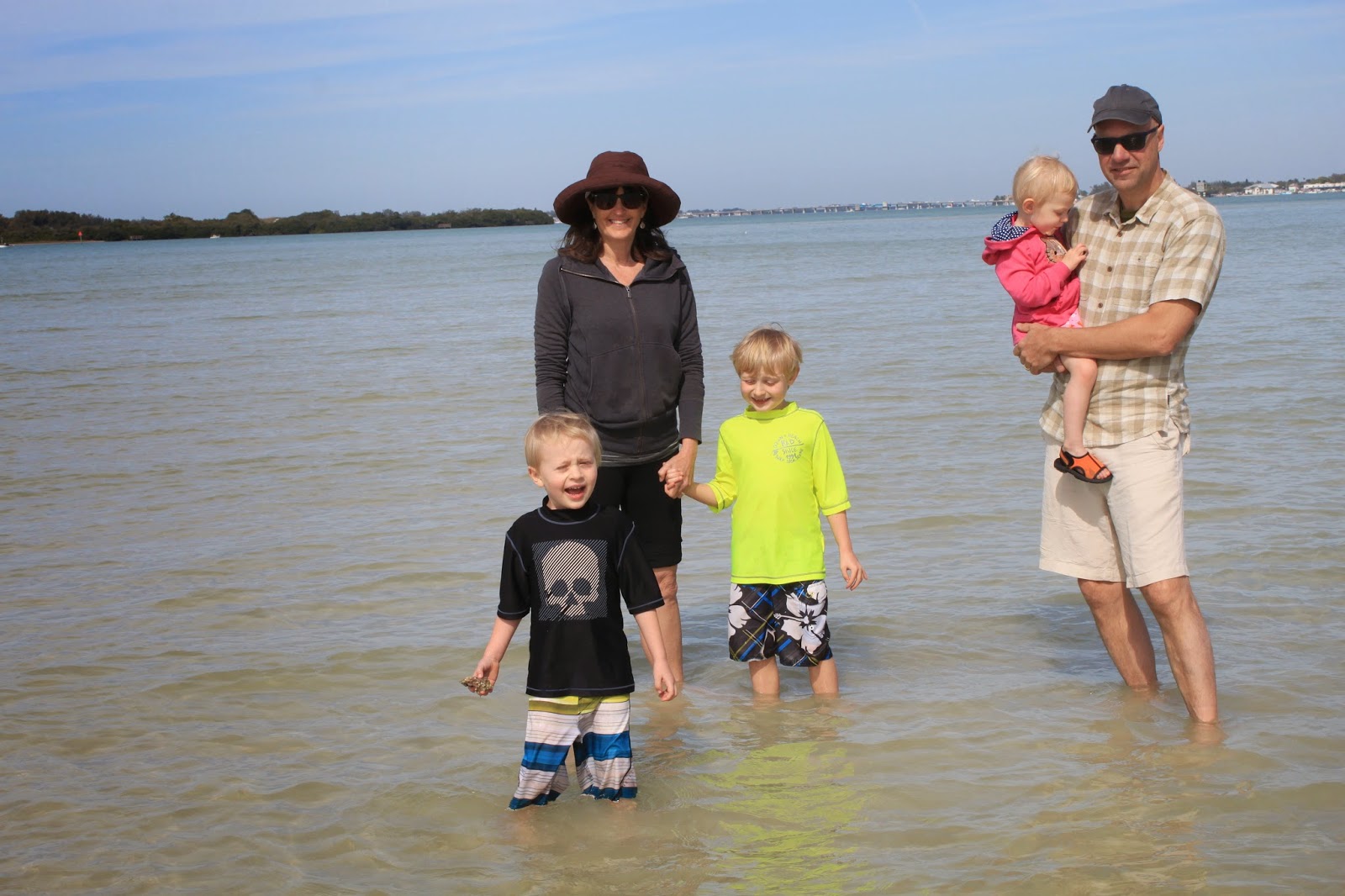 My mom has never been a fan of winter. I think the only thing keeping her in Minnesota is her grandkids, so what more perfect way to spend a month in January than to bring her grandkids with her to the warmth of Florida? We were happy to oblige, and the kids got the double joy of a beach vacation and a week with Grandma and Grandpa! Every morning, the kids tiptoed out of their room and straight into bed with Grandma and Grandpa. Every night, they chose a story told by Grandpa over their usual song sung by Mommy. And in between, every day was an adventure!

Just as it should be with grandparents, the kids were treated to way more sweets than usual. On one day they got donuts, candy, and pie. On another day, ice cream and birthday cake. Just about every day there was at least one of the above. I guess I should admit that I partook in every treat that they did, so I'm not complaining!

When the time came for us to leave, my parents were staying for another week and a visit from Tony and Catherine and the cousins. In the airport Max got a little teary-eyed as he said goodbye. It gave me a flash of what life would be like if my parents actually lived far away, and I was instantly thankful that our goodbye was only for a few short days.

Thanks, Mom and Dad, for a wonderful time! We enjoyed every minute of it. 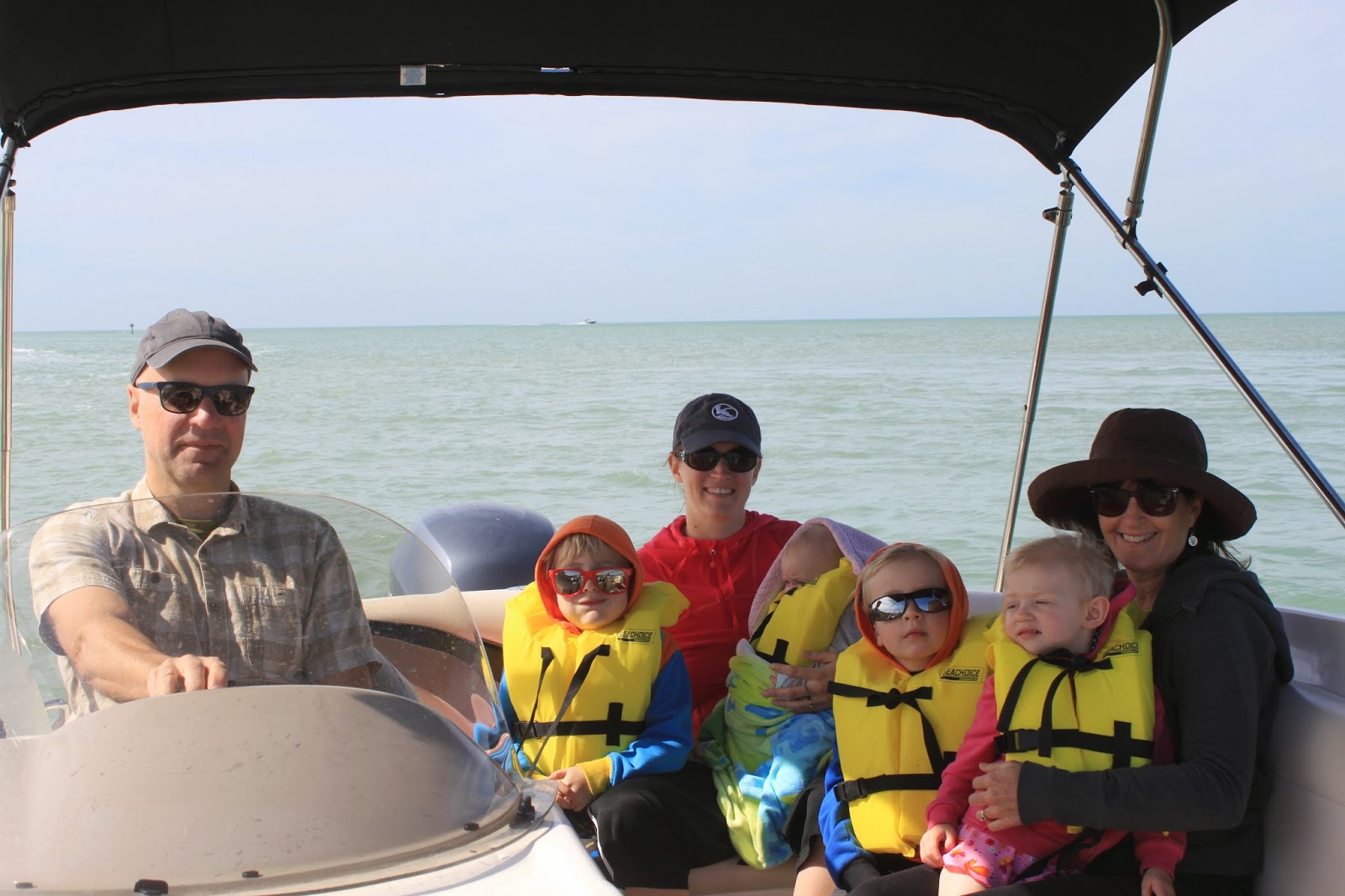 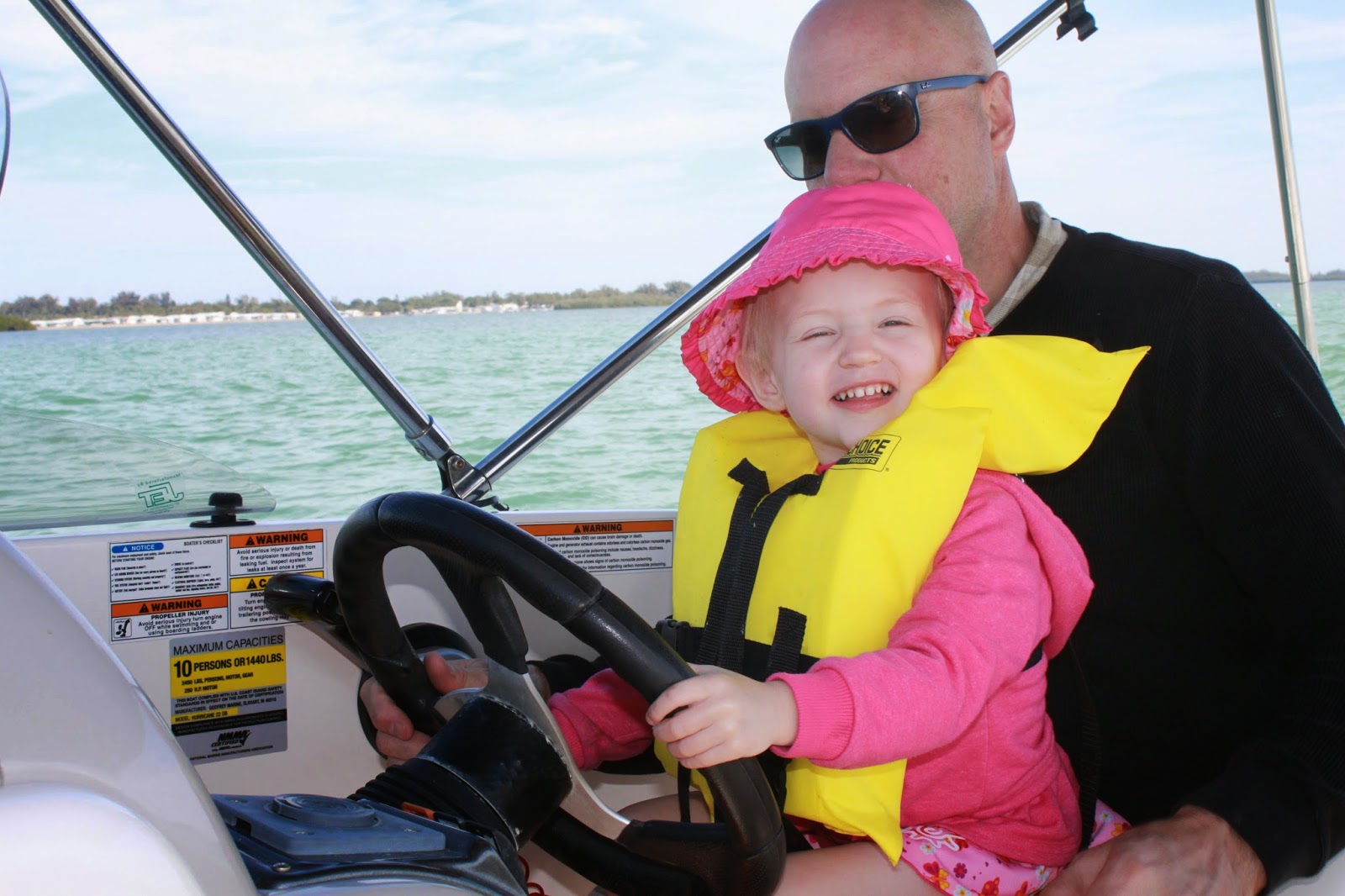 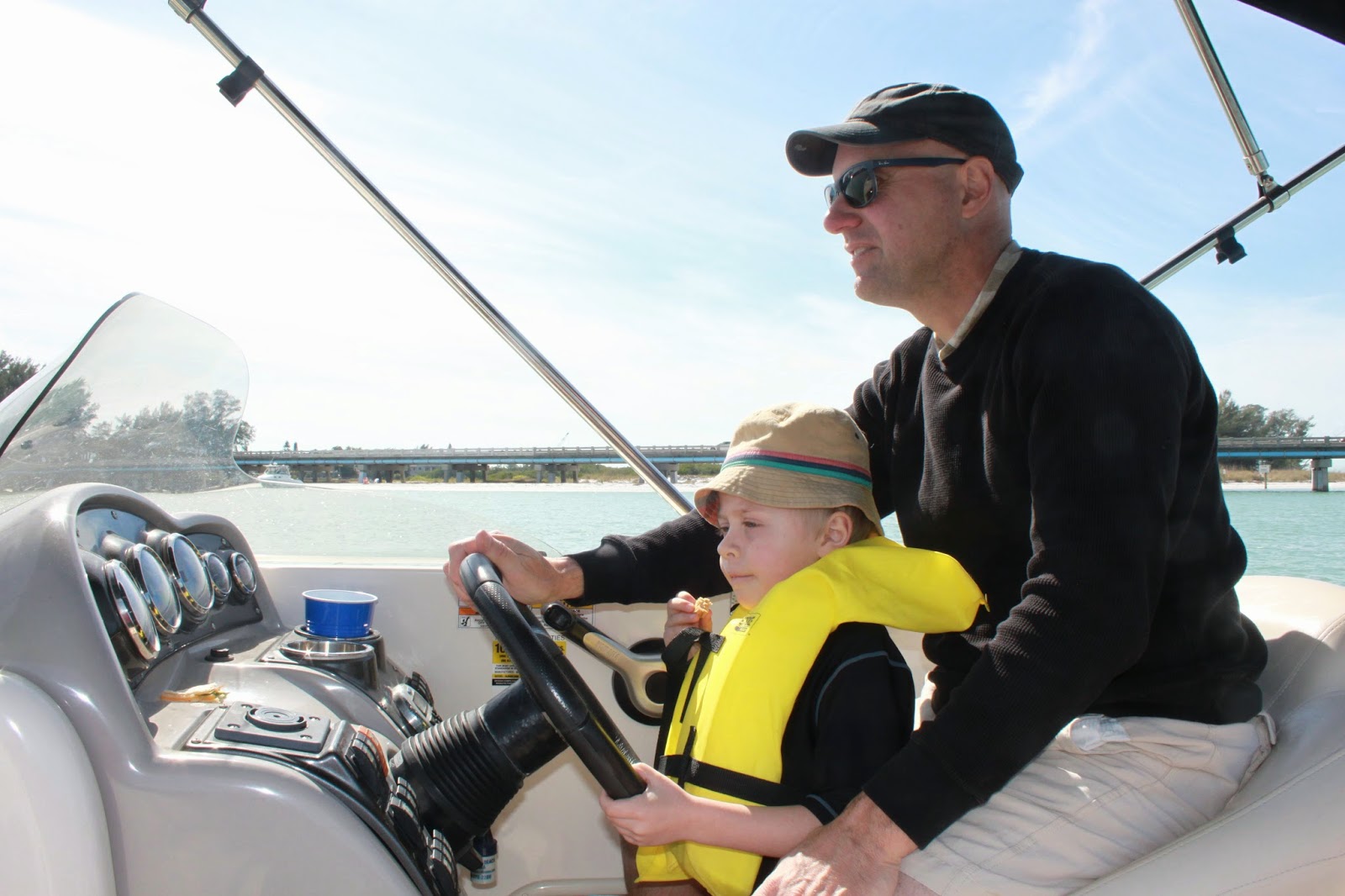 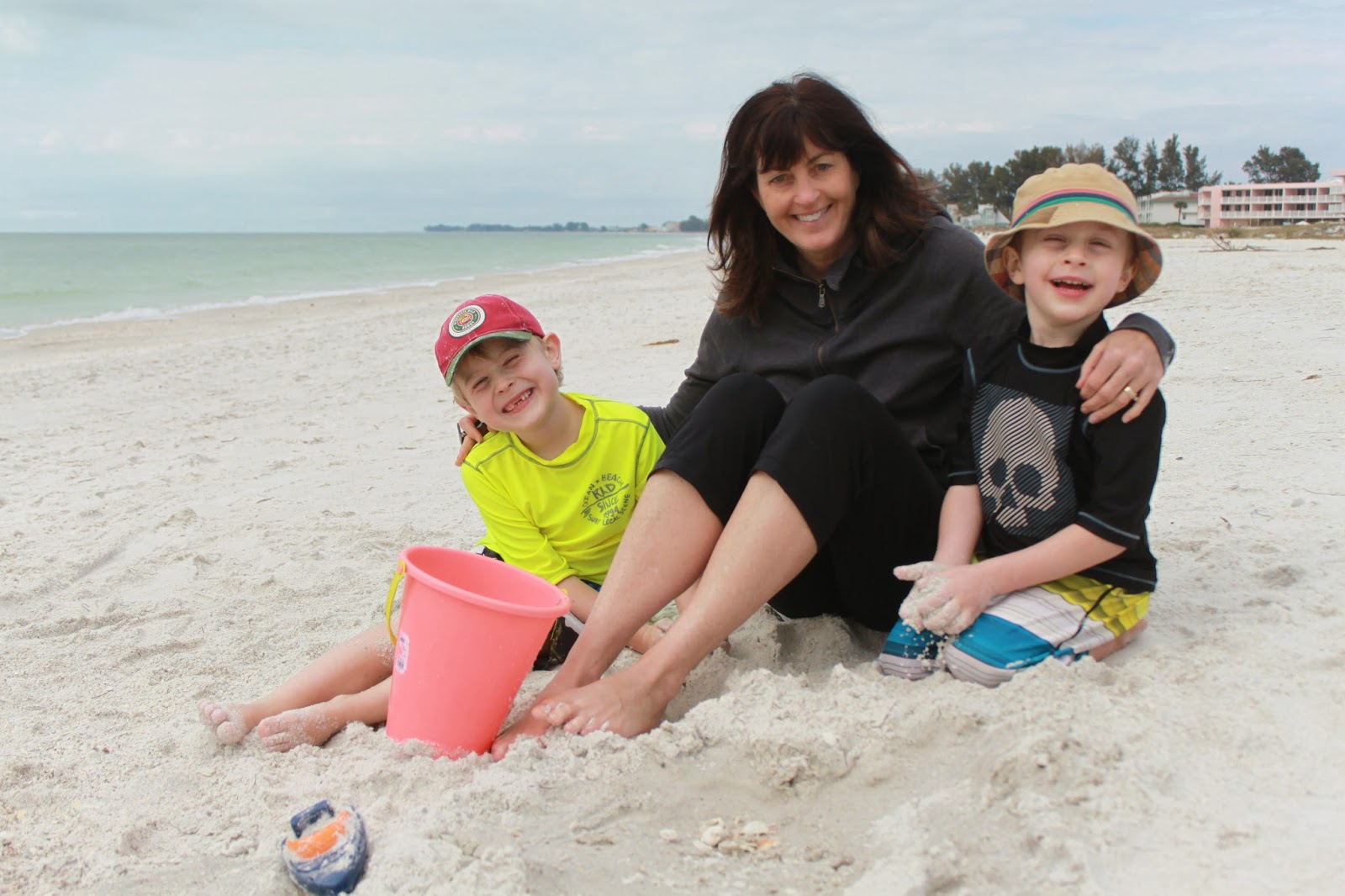 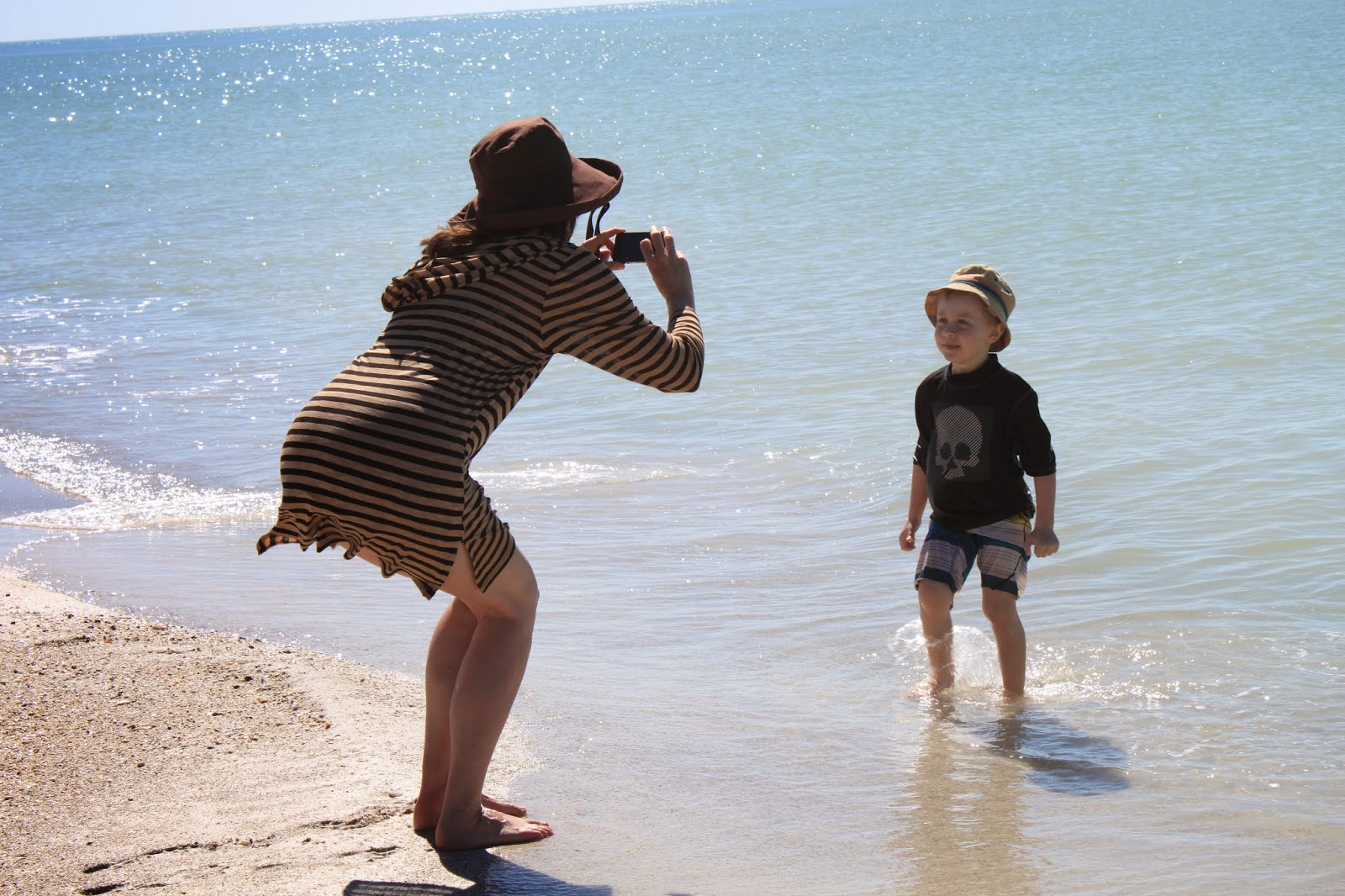 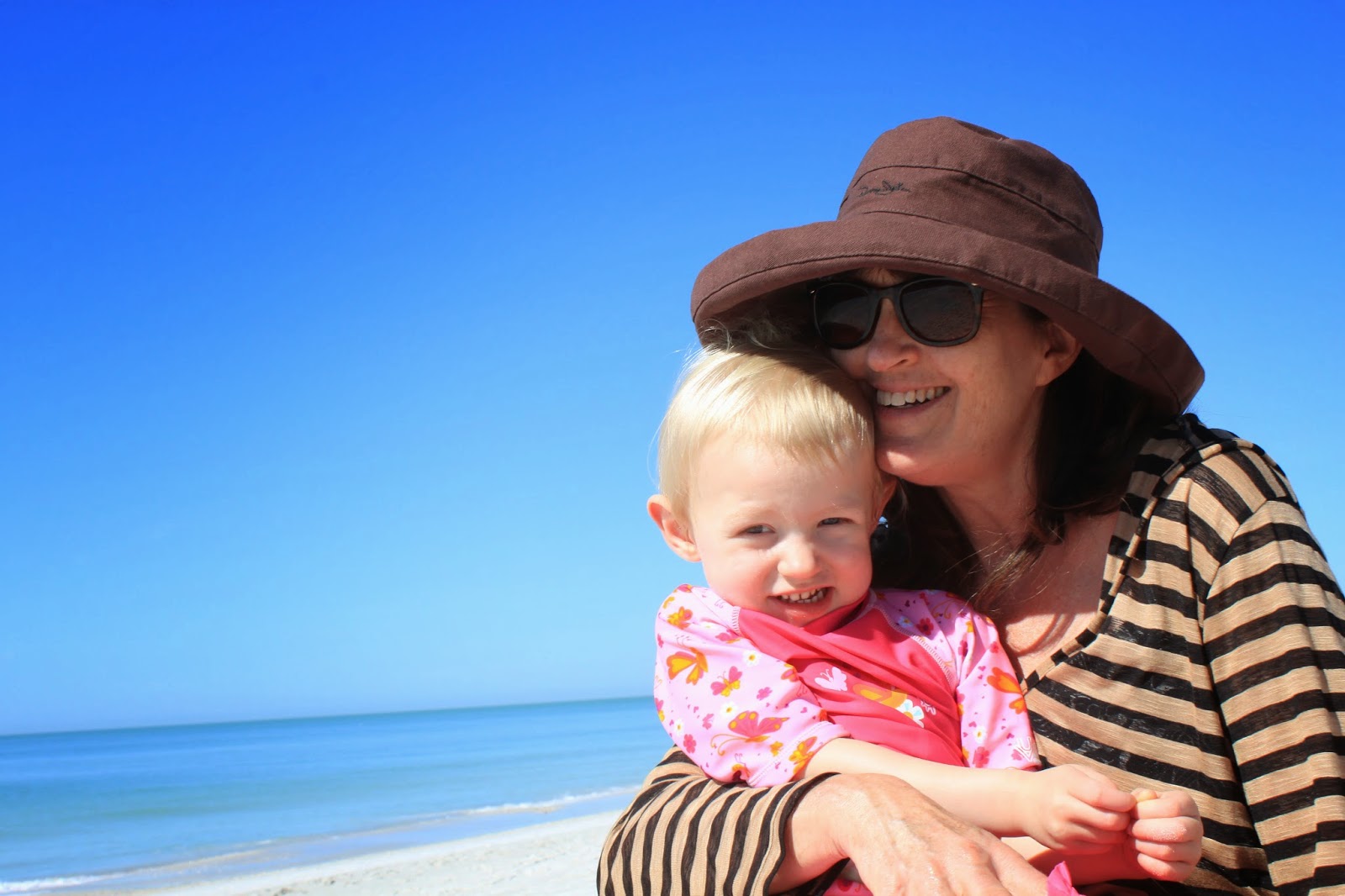 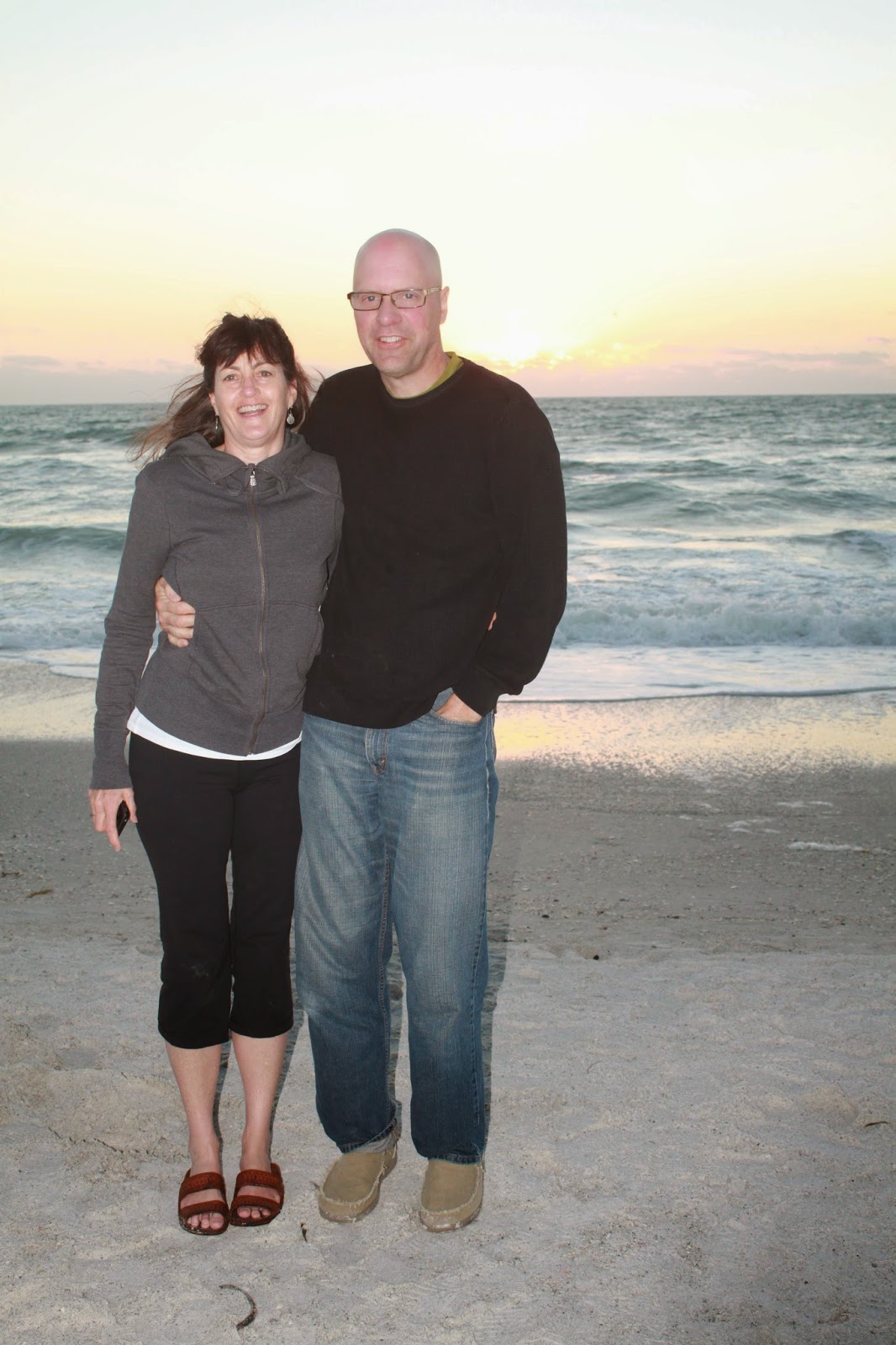 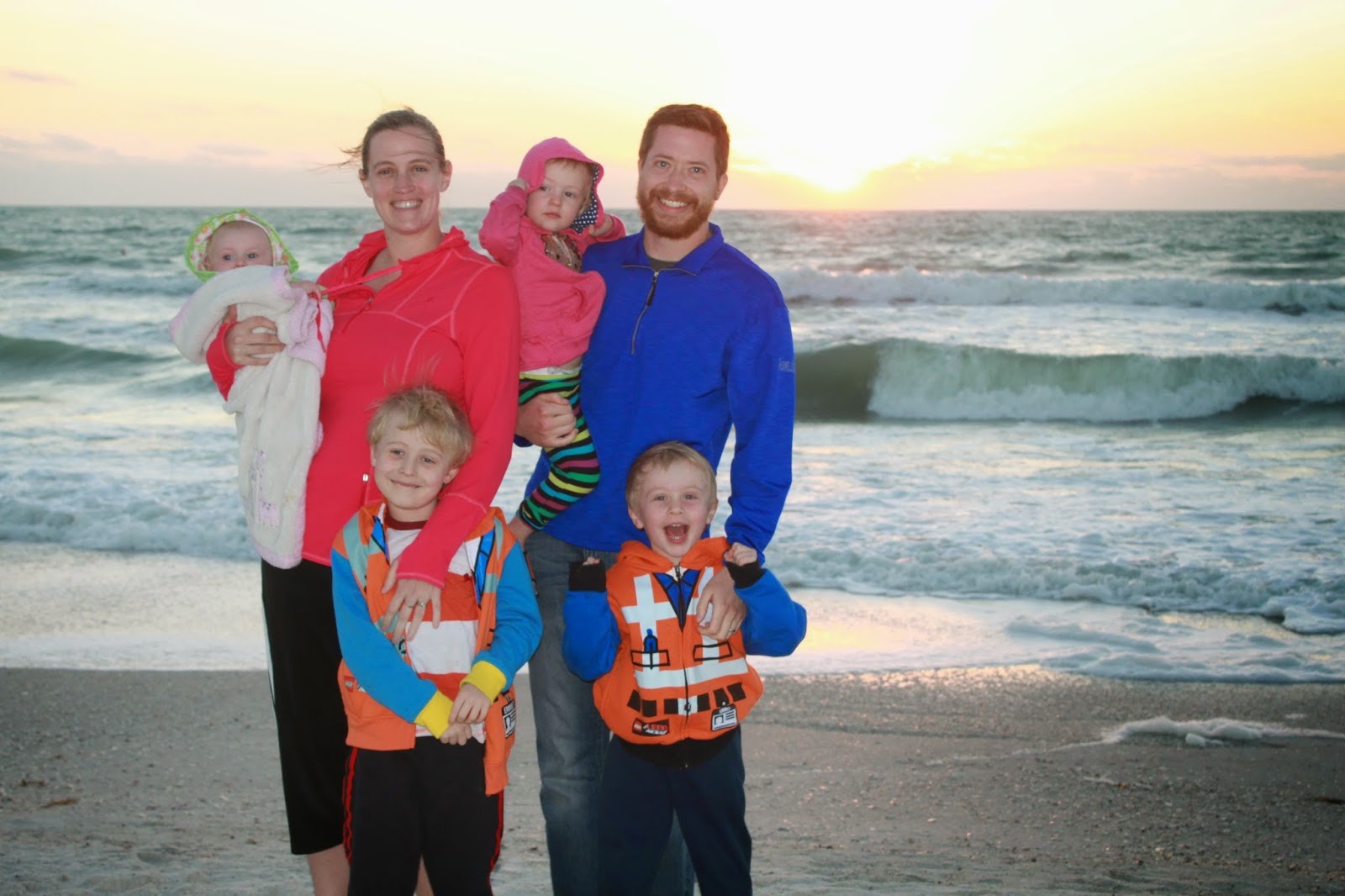 We just returned from a week on Anna Maria Island in Florida, thanks to my amazingly generous parents who gifted the trip to us as a family Christmas present. Wow! I always tell everyone that vacationing with children doesn't really count as a vacation, but I just discovered the exception to that rule. Vacationing on the beach in Florida with my parents definitely counted as a vacation. They got up with the kids every day, they took them for walks down the beach, they gave me and Paul a date night... it was heavenly.

We stayed in a cabin on stilts called The Crow's Nest. Sounds like it was meant to be, doesn't it? We were so close to the beach that I could hear the kids talking to each other from the front porch. They spent hours in the sand and the water, sent inside only by high winds or hunger. We ate dinner at the kitchen table, looking out over the ocean and watching the sunset. Speaking of sunsets, my mom initiated a tradition of doing a "sunset dance" each day after the sun went down, and the kids were totally on board! The men, well, let's just say they were content to watch. 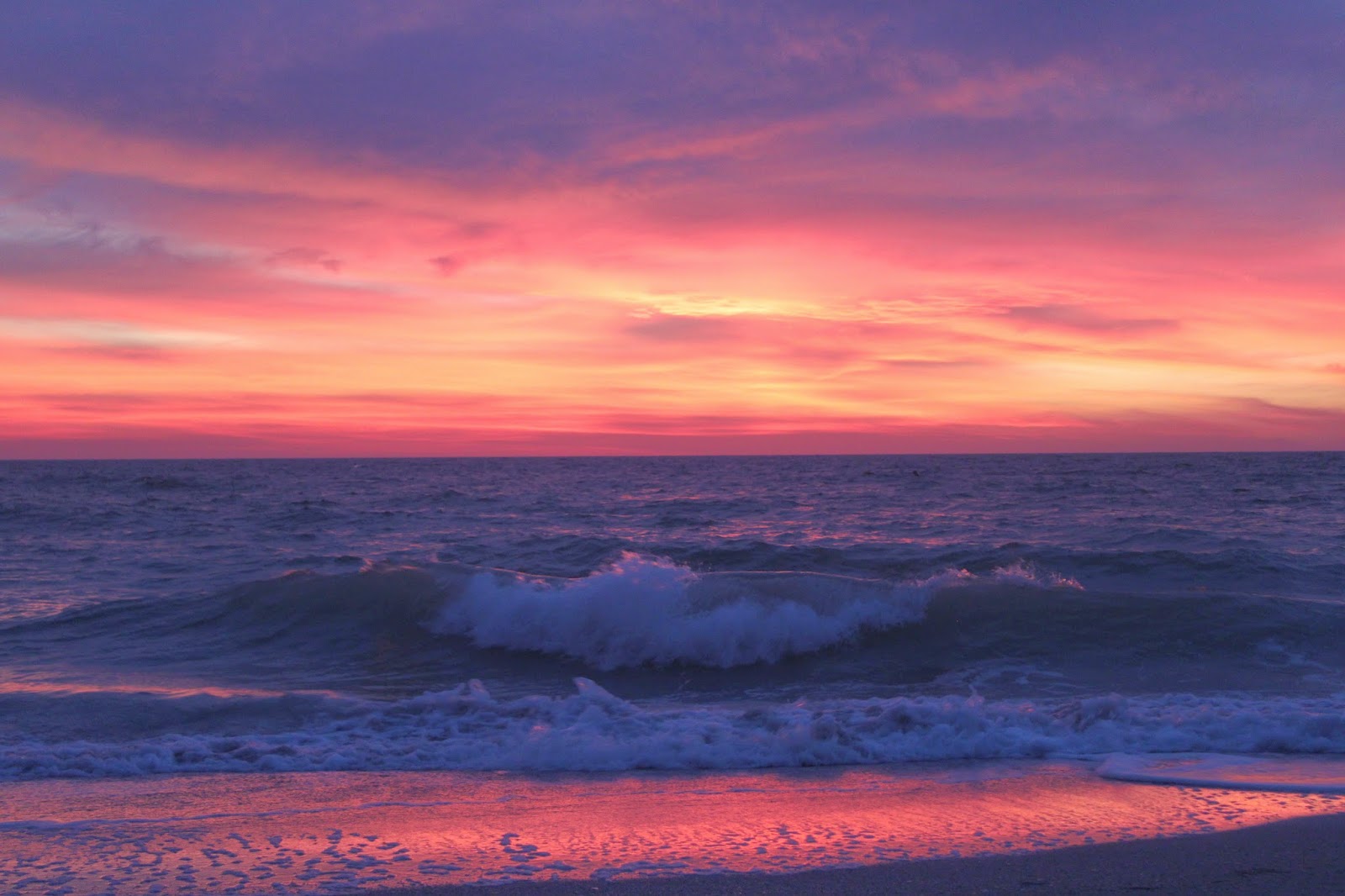 Lucian was able to celebrate his fifth birthday on our first full day at the cabin. He was super excited! We opened presents in the morning, went out for ice cream and mini golf in the afternoon, played at the beach in our sweatshirts (it was coooold!) and celebrated with cake after a nice warm bath and jammies. I think he was pretty pleased to ring in his fifth year that way. He even won a free game of mini golf, and got to play solo with Grandpa a few days later. Lucian's other favorite activity was to stand in the water, holding his grandma or daddy's hand, and let the waves crash on him. He loved the thrill and excitement, knowing he was totally safe at all times. 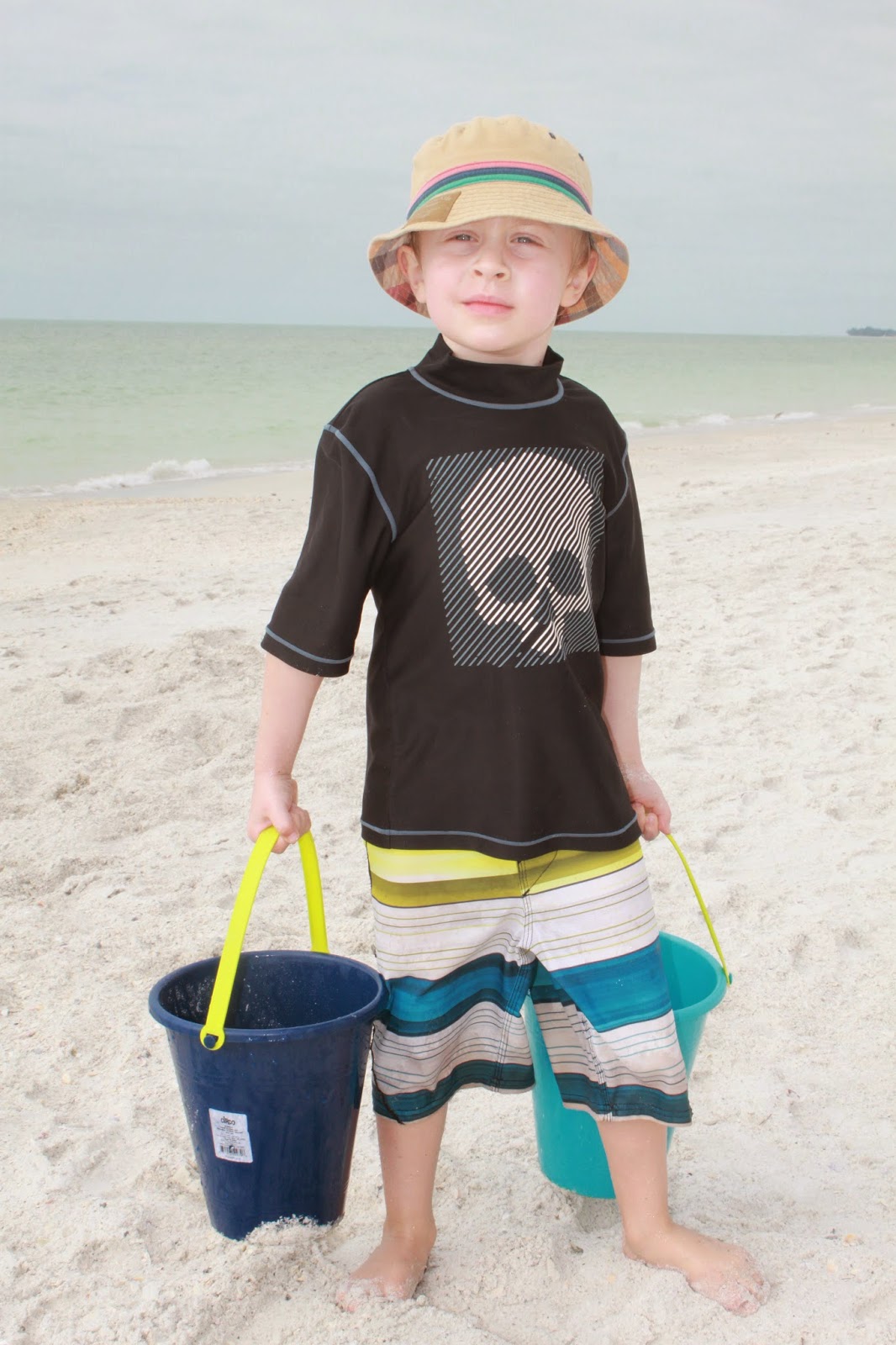 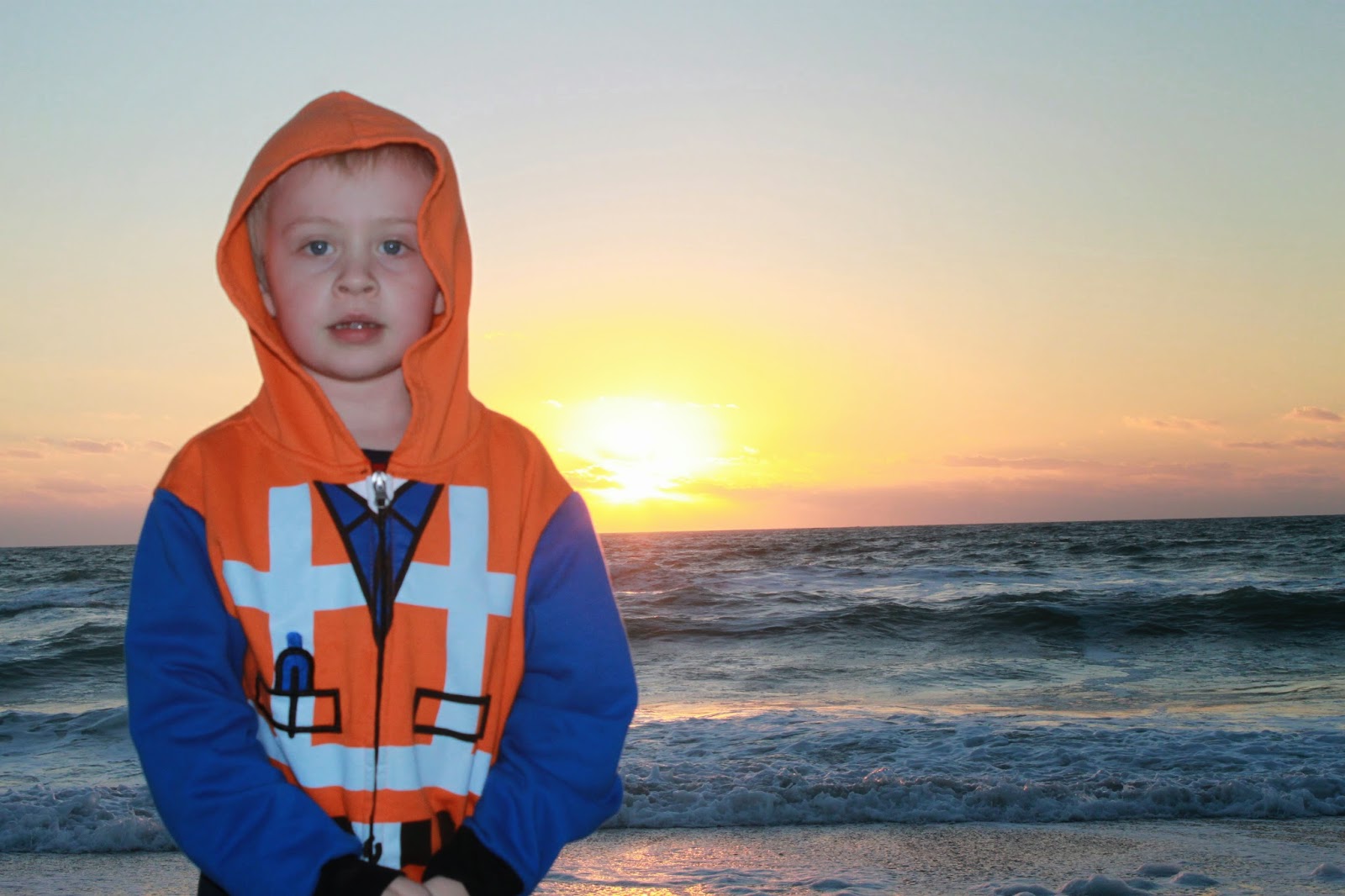 Max would have spent every waking moment in the sand if we had given him the option. He dug holes, buried himself, had Paul bury him, he had sand EVERYWHERE. It always amazes me that having pants full of sand doesn't seem to faze kids at all. Max also loved to splash in the water and explore the beach. There were two restaurants in opposite directions about a mile from our cabin, and we visited each one at least once. He generally made the trip at a full run, until something exciting (like someone else's amazing sandcastle) stopped him in his tracks. He reminds me a little of a puppy sometimes. 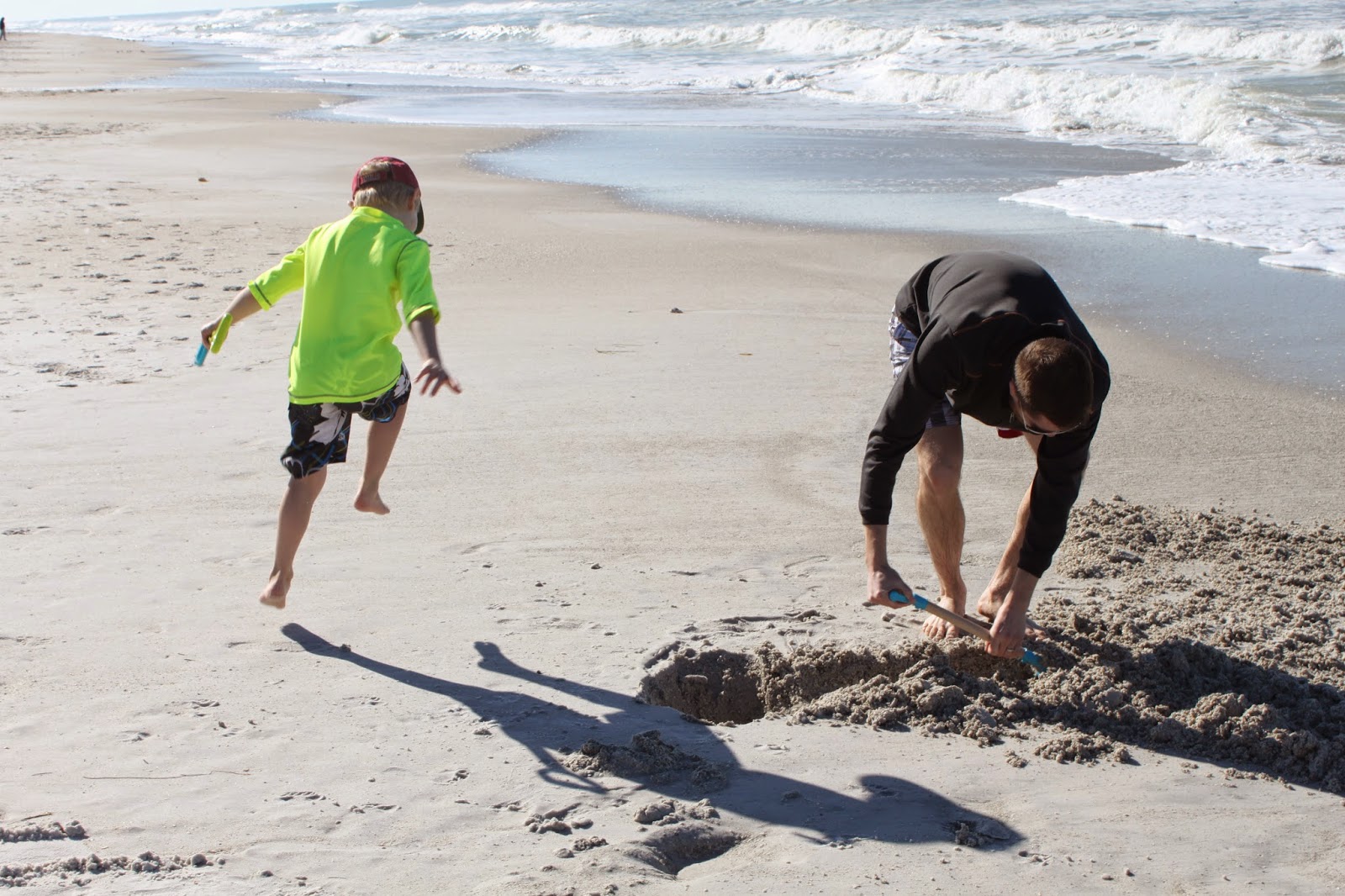 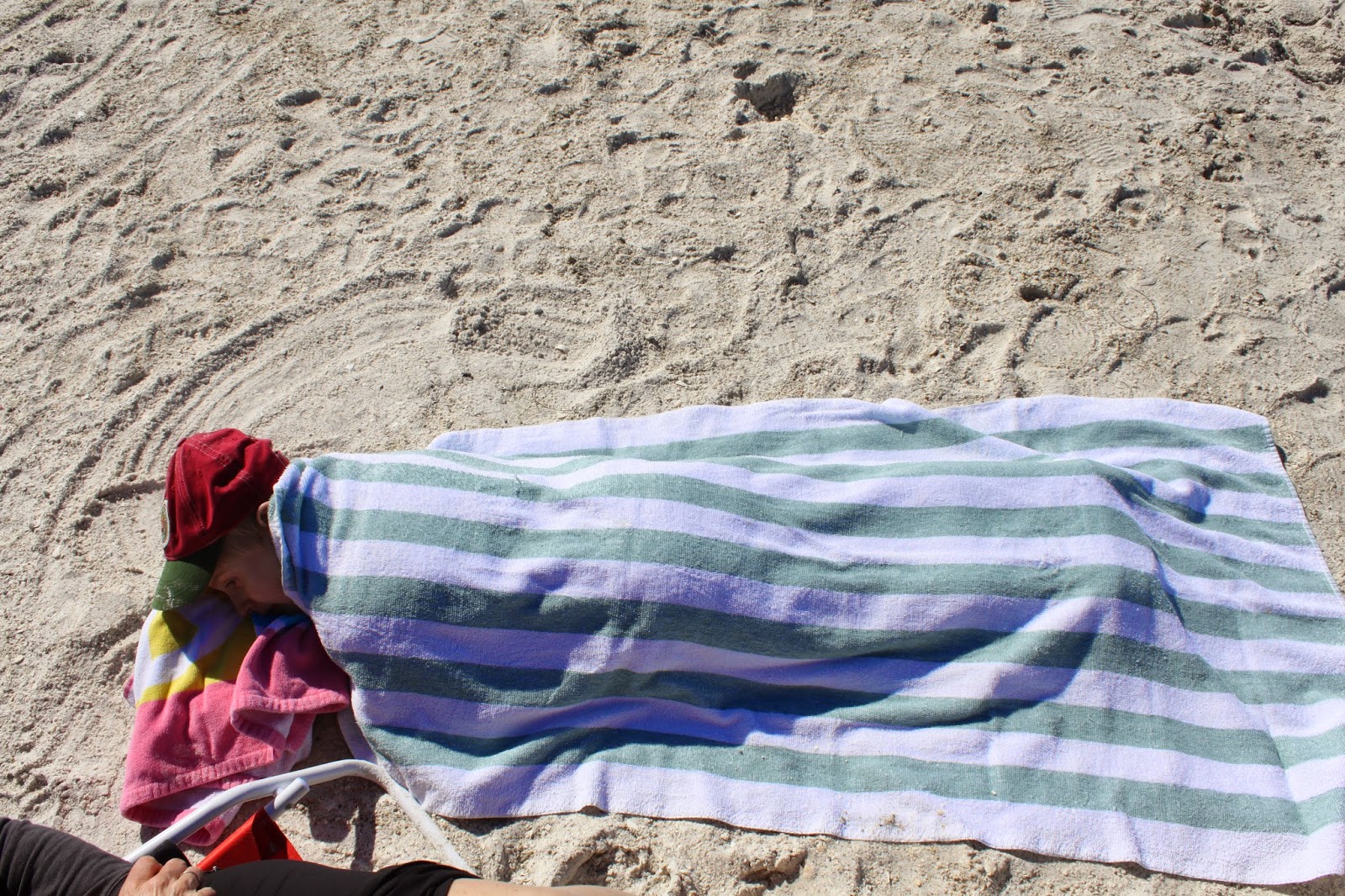 Audrey tried dipping her toes in the water a few times, but she quickly decided that she preferred to keep her distance from the waves. She spent the majority of her beach time lounging in a chair or digging in the sand. When in the cabin, her favorite activity was swinging with Grandpa on the front porch, cuddled under a blanket with monkeys on it. She also loved riding in the stroller when we went on walks, which was a bit of a bummer for her since she has a little sister who generally occupied her seat. Poor girl, I don't think she was quite ready to give up being the youngest. But she had a grand time on various adults' backs and shoulders, so she couldn't complain too much. 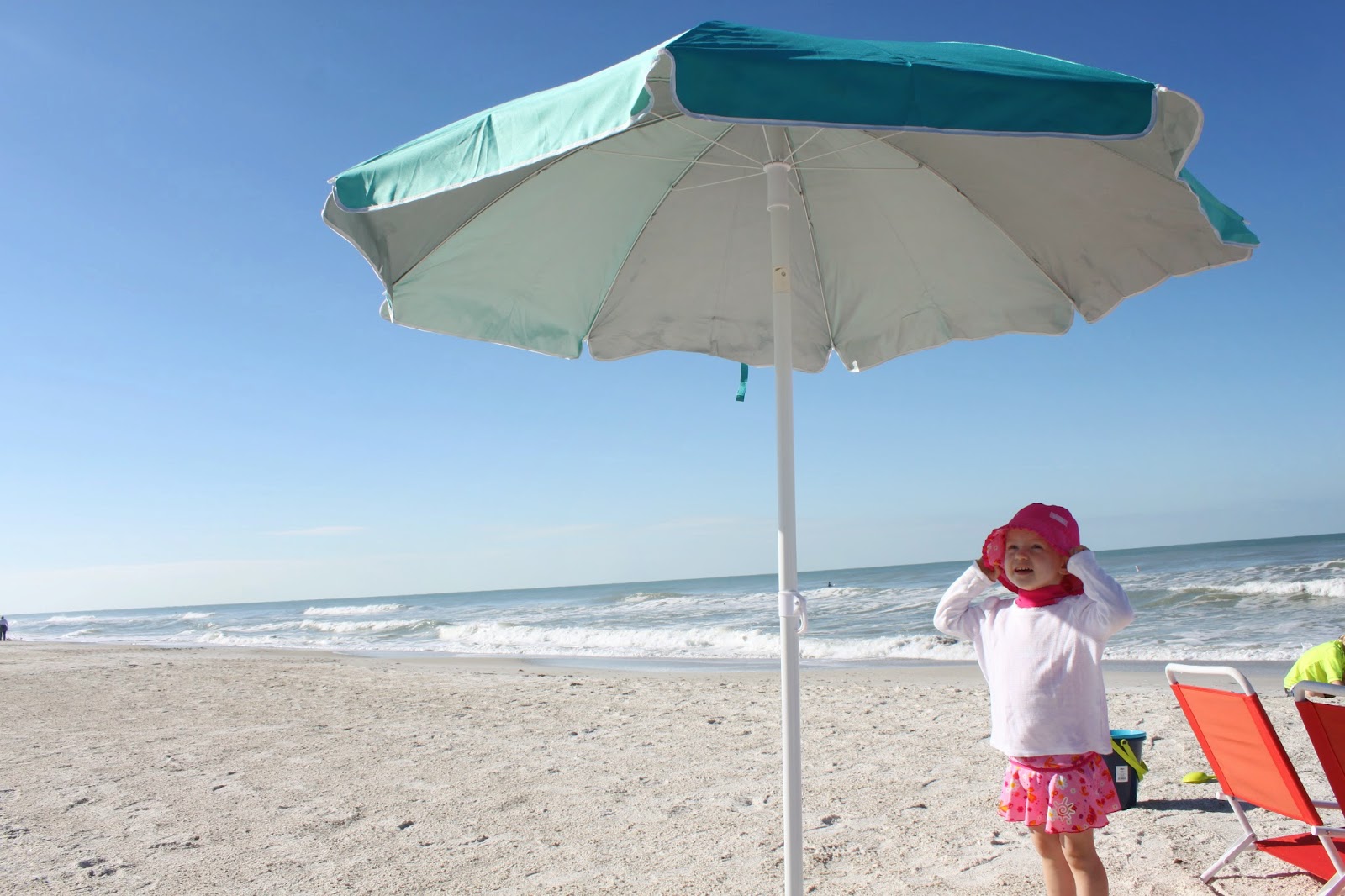 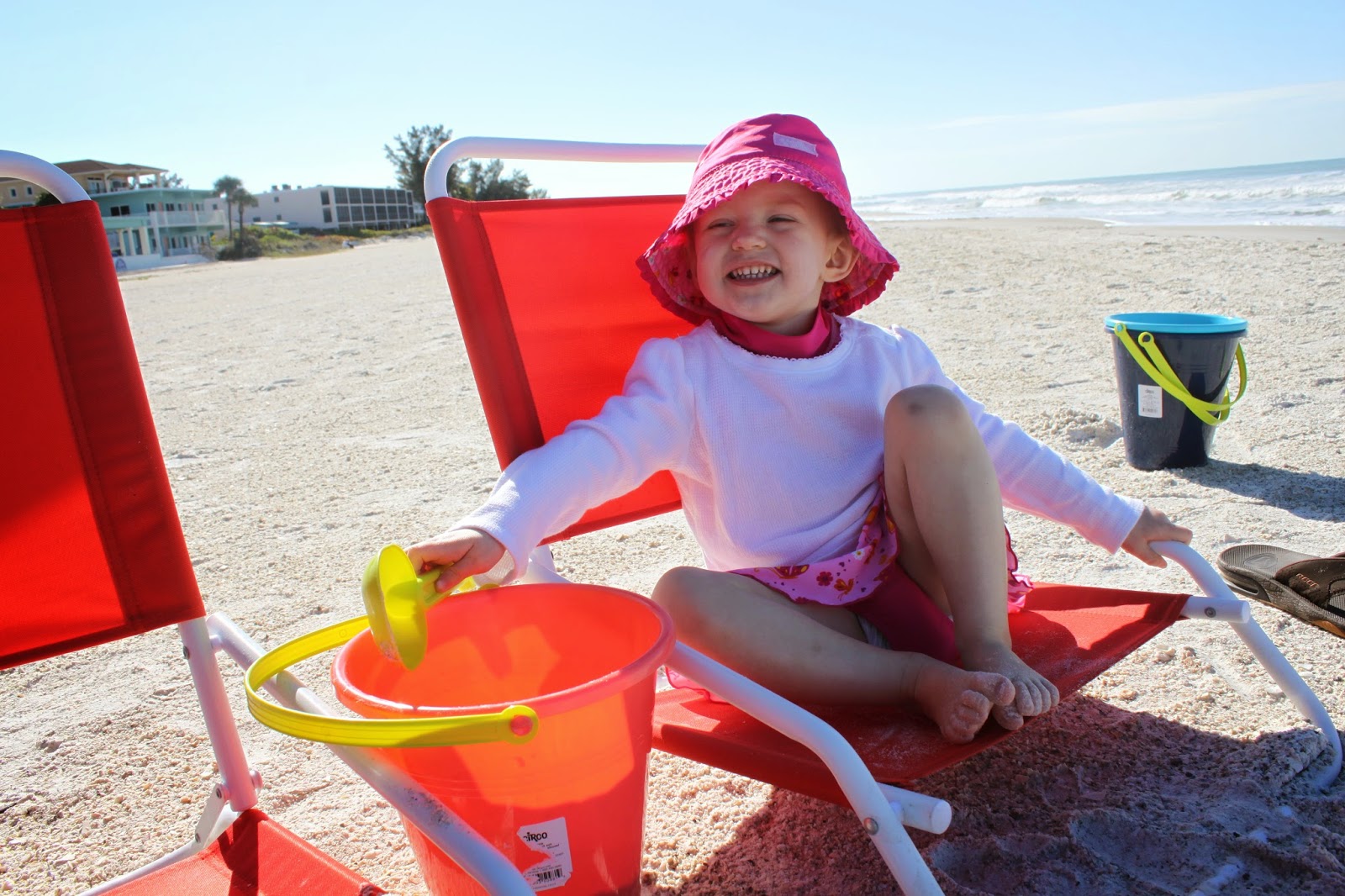 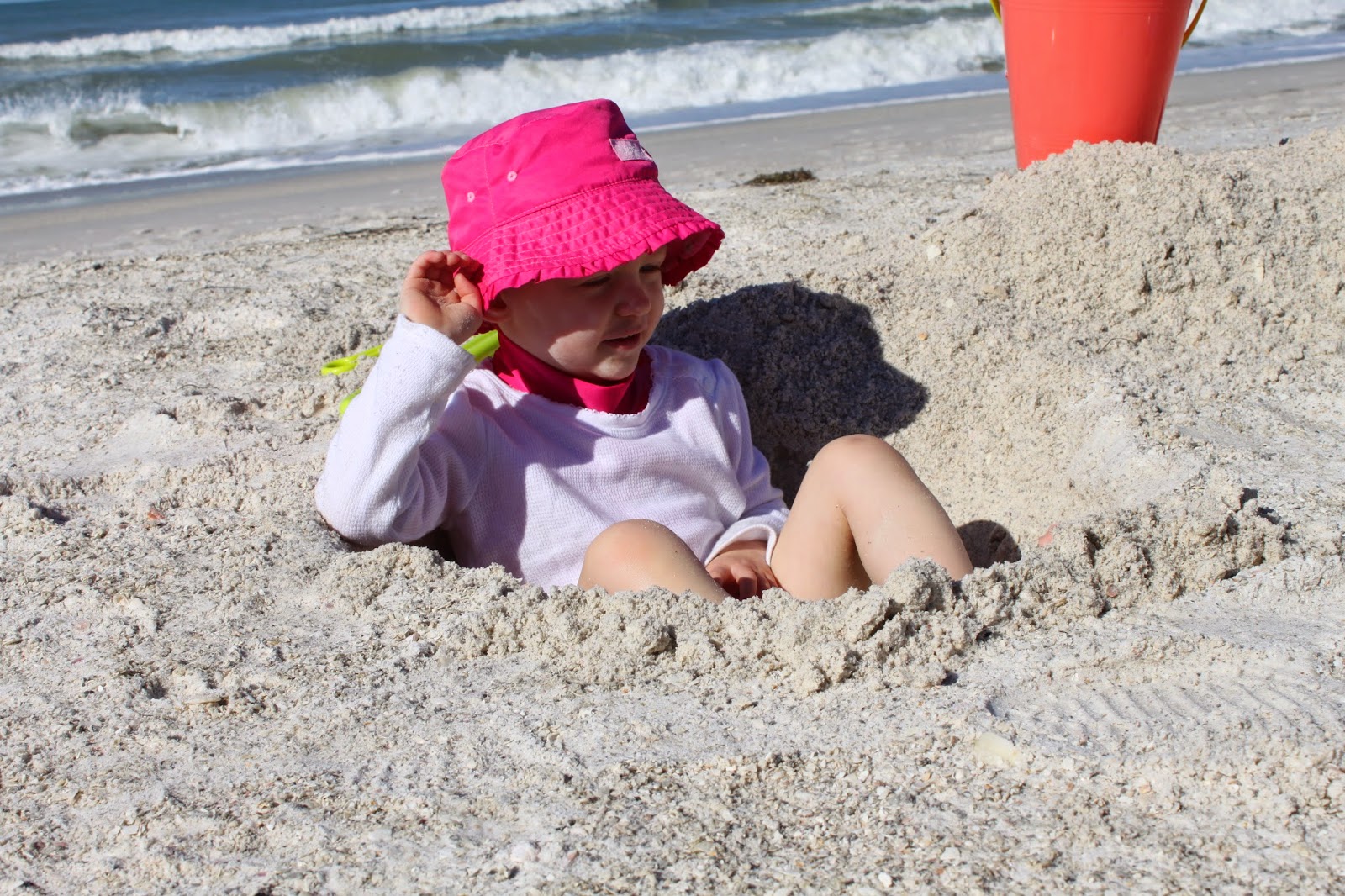 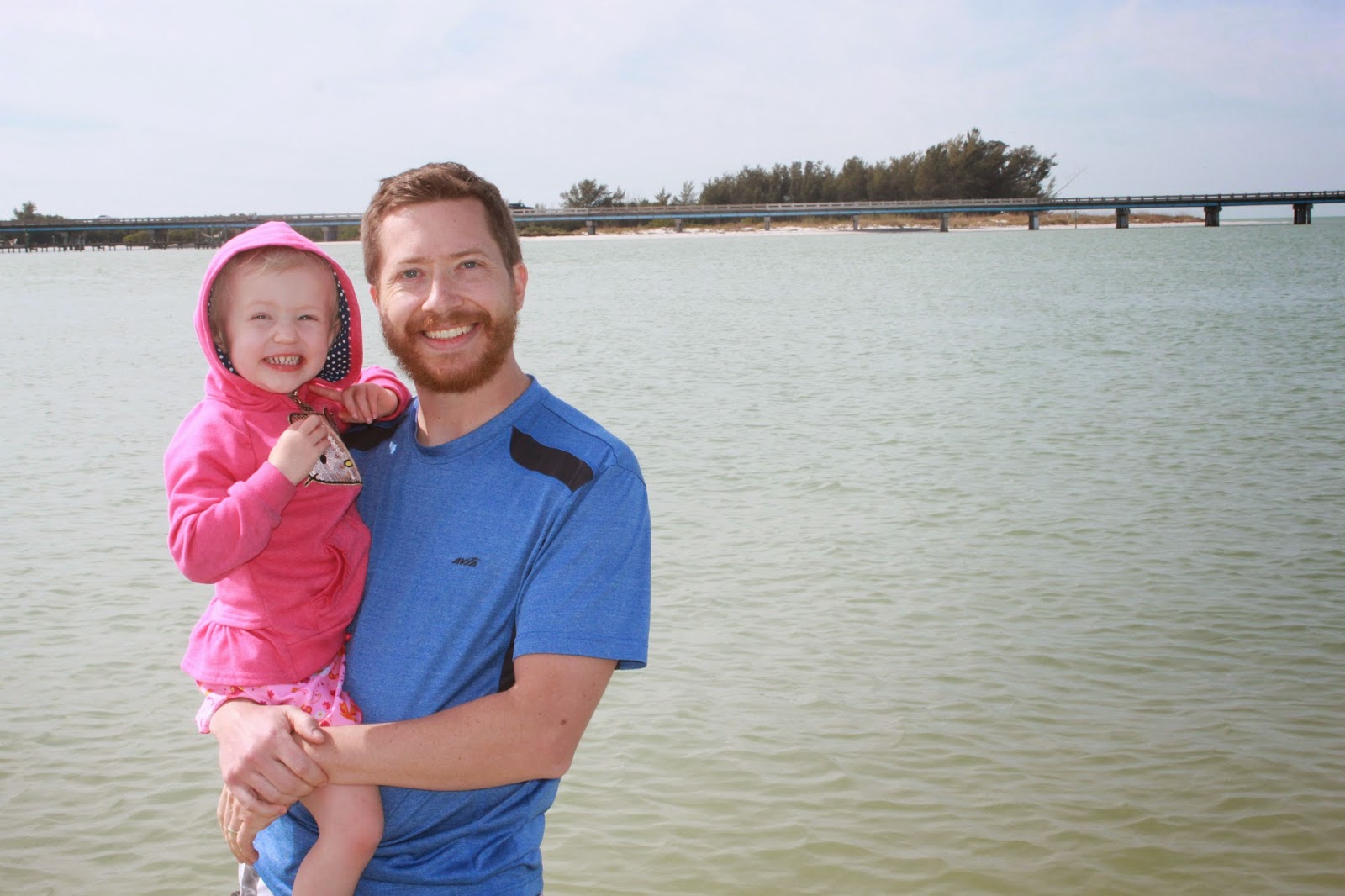 And Edith did what she does best: sleep and eat. She slept in the stroller, on the beach, in our room, pretty much anywhere we went. She even slept on the plane! Hallelujah! But her favorite part of the trip was probably starting solid foods. We picked up some baby oatmeal and gave it a try... and she was in heaven! She gobbled it up every day. Plain baby oatmeal. Ew. Guess she's got nothing to compare it to! 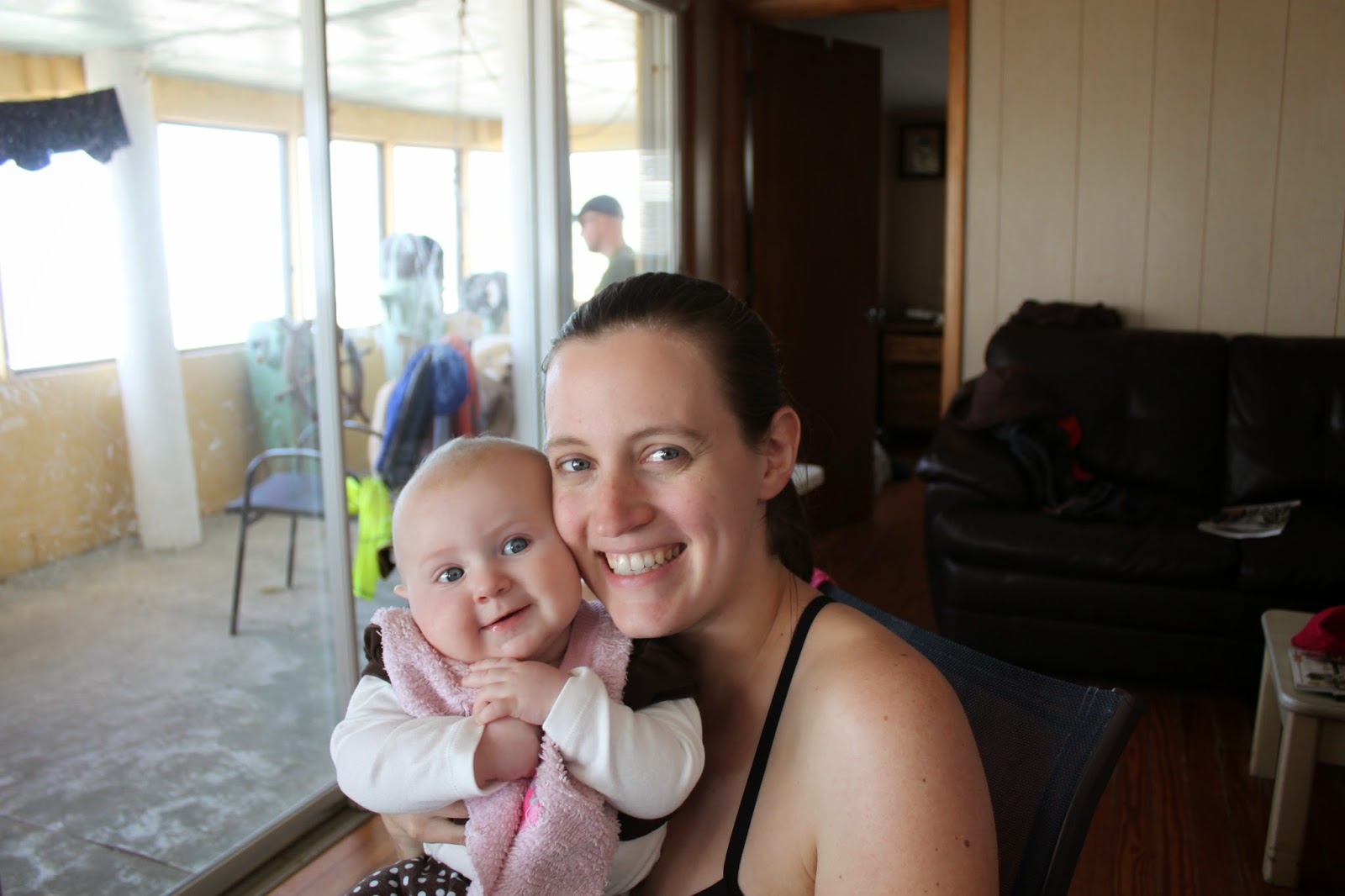 It was an amazing trip, and I decided I can't fit it all into one post. There will be more to come!