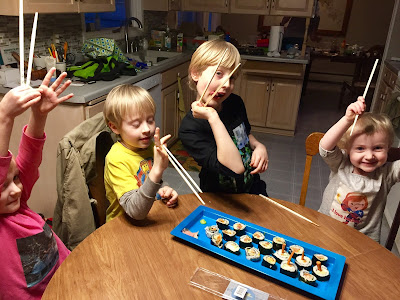 At a recent family get-together, Ben and Beth discovered that our kids love sushi. They were highly impressed by the adventurous tastes that our little connoisseurs had developed, and so later that week my brother called me to ask if we would host a sushi-making get-together. They would bring all the fixings and would teach us how to roll sushi, all we needed to bring was an appetite. No problem there! 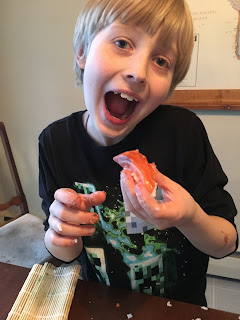 On the day of the Sushi Party, as my kids had been referring to it, I came home from teaching at the church to find our table strewn with every imaginable sushi component. Ben was helping Max press rice onto a sheet of nori (seaweed) and choose his fillings, Beth was rolling her sushi using an actual bamboo sushi mat, Paul was heating the sake, and Lucian was taste-testing the first finished rolls. There was fresh salmon, canned tuna, strips of carrot, cucumber, avocado, egg, wasabi, soy sauce, you name it they thought of it. 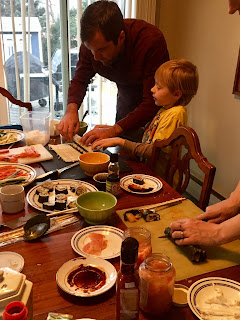 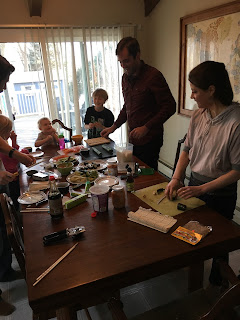 We made roll after roll, eating it almost as fast as we could make it. Max took to naming his sushi: Odd Roll (inside out roll with tuna, sriracha mayo, egg, and cucumber. Delicious), Ready and Prepared (rolled with soy sauce, wasabi and ginger to save you the effort of dipping), Dream Roll (something yummy...) and Original (carrot, cucumber, salmon. Made to look as much like a cartoon version of sushi as he could). Finally, as our rolling began to outpace our munching, we moved to the living room to read stories and get ready for bed. Ben and Paul cleaned up while Audrey attached herself firmly to Beth.

Of course before the night was even over, the kids were already planning the next Sushi Party, and the general consensus was that it would take place "tomorrow" of course. We weren't able to pull it off quite that quickly, but here's hoping we can do it again soon! What a fun and delicious evening! 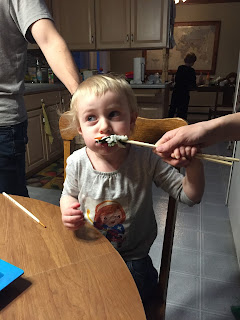 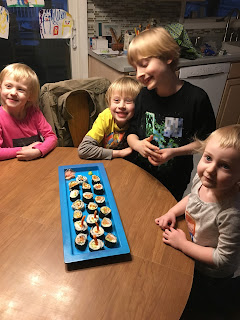 Email ThisBlogThis!Share to TwitterShare to FacebookShare to Pinterest
Labels: adventures, at home, family 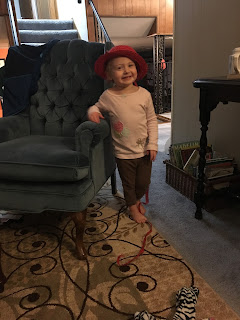 I can't let another day go by without recording the latest antics of our current toddler, Miss Edie Clare. I could have never guessed six months ago, when she was scattering the contents of her diaper around the house, that she would have matured so much in such a short time. Her verbal skills are off the charts, she has a sense of humor, and she is just plain fun to be around! 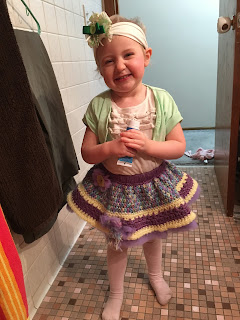 She has, by her enthusiasm and sheer cuteness, turned our whole family into avid hockey fans. She can sense a Wild logo from a mile off; she has been known to shriek "Minnesota Wild!!" while walking into church when she notices that the teenage boy towering in front of her has the adored logo on his hat. She even refers to herself in the third person as "The Hockey Player". Lately, she has taken to walking around the house with her imaginary friend. She gives him piggy back rides, rocks him to sleep, holds his hand when they walk down the stairs. I asked her what his name is, and she replied, "Scandella!" For the uninitiated, Marco Scandella is a Wild defenseman, and her favorite player on the team. 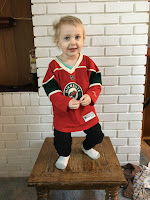 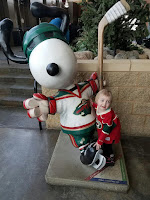 On game days, we gather together in the basement. Lucian and Audrey put on their hockey gloves and play against each other while the rest of us relax and watch the game. When we settle in to watch, Edith inevitably disappears into the laundry room for a moment and then reappears with a cold beverage for her daddy. "You want a beer?" she asks. How can he possibly refuse? This is, of course, followed by the question "Can I ha' some?" 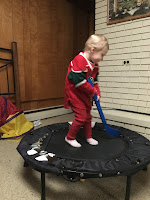 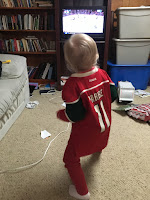 Recently, Paul was away in the evening and I found myself turning on the game. For those of you who have known me a long time, you know how monumental this is! Edith disappeared from the room for awhile, long enough that I thought it prudent to check on her. No, I no longer have to worry about her diaper staying on, but there are plenty of other things she still loves to get into. I went upstairs and found that she had gotten a beer from the fridge, pulled a chair up to the counter, and was attempting to open the bottle with a meat thermometer! "Mommy want a beer?" she asked casually. Oh dear...

But it's not all hockey around here; Edie also has a great love for singing! Of course, her favorite song is the Wild anthem, but she fills her days with song and will serenade anyone who asks her. Other favorites include Don't Worry, Be Happy, Somewhere Over the Rainbow, Happy Birthday, A Tisket a Tasket, anything from Moana, and the theme from The Nutcracker... that is, one line of it, sung repeatedly as she spins and dances in circles until she falls down.

The other day I heard music coming from upstairs. I tiptoed to the girls' bedroom door, peeked in, and found Edith sitting on the floor listening to her CD of children's folk music and singing along at the top of her lungs. Oh my heart!

I can see in her eyes that she still has a propensity for destruction, but she has been learning to channel it in appropriate ways. Her favorite activities are cutting paper and getting into our toiletry drawers in the bathroom. One day I found her with concealer all over her face; the next day she smeared Paul's hair cream all over her head. She has an intense desire to bite people, but she knows it's wrong so she will move in slow motion, teeth bared, until we tell her "No bite!" and then she'll instantly put her arms out and insist "I was huggin' you!" 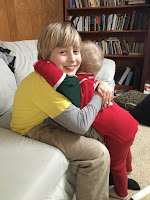 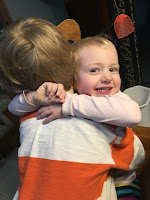 Most of our children had a rough stretch between age two-and-a-half to three-and-a-half, but Edith seems to have peaked early. The previous year was a nail-biter, but she's grown into a fun loving, sweet toddler... maybe we'll be able to avoid the threenager stage after all! 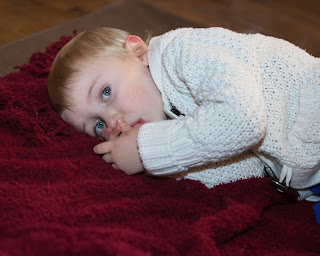