Over Fathers Day weekend, we went with my parents to visit my grandparents in Marshall. It was a fabulous weekend, and we packed in a full vacation's worth of activities in just two days. My grandparents own some land that has, until now, been known as The Pit. I've written about it before, but it is a little paradise that boasts two beautiful ponds that are chock full of fish. We decided to re-christen the spot Golden Pond, because a name like The Pit just didn't do it justice. 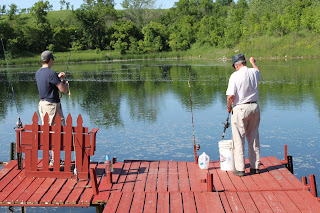 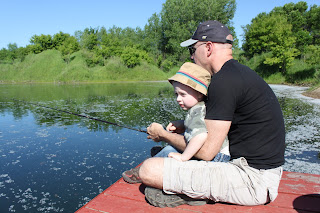 The day before our arrival, my grandpa finished building the road to the pond, built and painted a little deck with a shade umbrella for the ladies and babies. What a spot! I felt like I was on the set of a Target photo shoot! Check out these ladies: 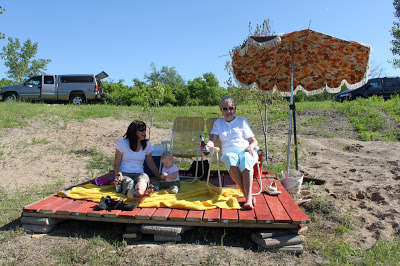 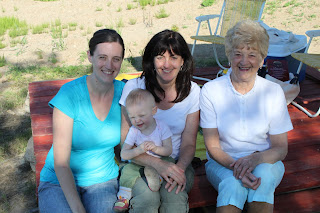 All the dads got in their fair share of fishing, as did the boys. There isn't a single small fish in the whole pond, so every catch was enormous and exciting! Max and Lucian each got to reel in a couple, with the help of Grandpa and Dad. Audrey was kept happy with a fistful of snacks and a cooler at her disposal, and I spent the majority of the day in the shade watching the boys bounce from the dock to the sandpile and back. 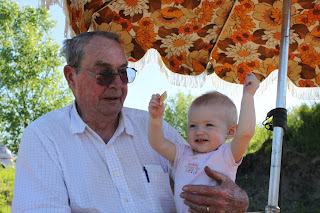 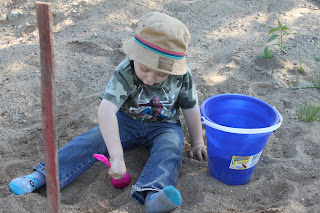 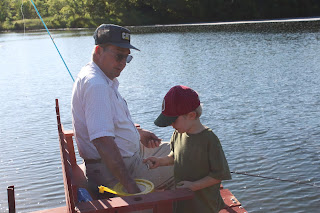 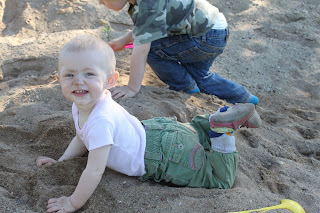 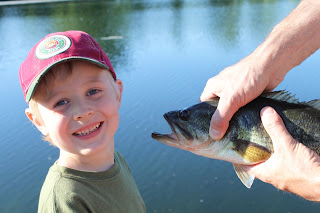 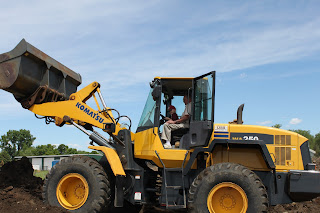 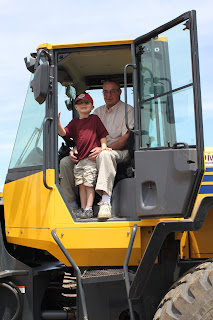 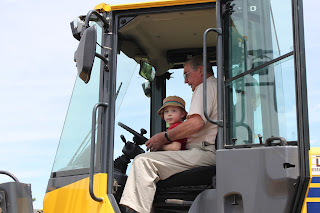 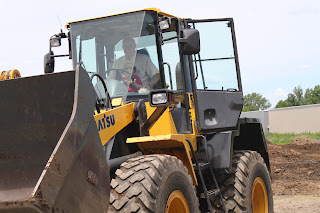 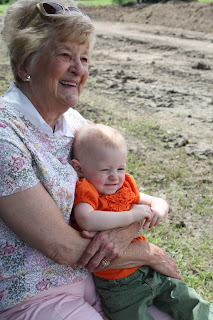 This trip was one that the boys will not soon forget, and neither will I. Happy Fathers' Day to all of the wonderful fathers, grandfathers, and great-grandfathers in my life! It was a joy to spend this Fathers' Day with three generations of fathers. 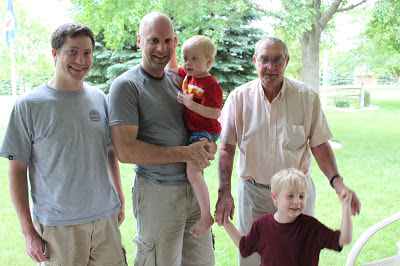 I crack myself up sometimes. As I set about cleaning and organizing a counter top in our kitchen that has gone untouched for at least a month, I unearthed this beauty: 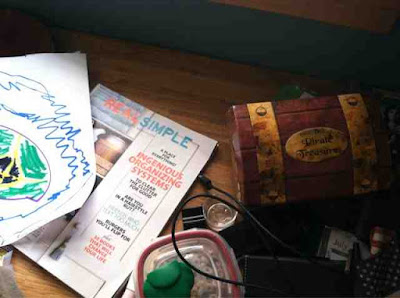 In case you can't read it, that's a Real Simple magazine with the headline "Ingenious Organizing Systems to Clear the Clutter for Good". I received this magazine in the mail about a month ago and promptly lost it under a pile of clutter, including but not limited to: a duplo tree, a snack container of raisins and cheerios, an American flag (likely from last 4th of July), an empty tealight candle holder, a tube of sunscreen face lotion, a cardboard treasure chest, and various works of art, bits of paper and electronic cords.

I just had to laugh (to keep from crying...) at the irony. I invest in this beautiful, inspiring magazine that speaks right to everything I want to improve in my life, and it gets devoured by the exact thing it is supposed to help me eradicate. Yeesh. For some people it comes so naturally, keeping a clean house. For me, it is as if there is an invisible teenager leaving a wake of destruction in every room I am not currently occupying. I have intermittent bursts of energy and I whip around in a frenzy trying to keep up with my unwelcome guest, but the moment I turn my back, the paper is stacked to the ceiling again. The countertops are buried. The clothes are heaped in a jumbled mess and I don't know what's clean and what's dirty.

For my own sanity, I decided that my messiness is slightly out if my control. I am cut from a different cloth than my über-organized peers, and that's ok. I have my strengths elsewhere. But I still need to be careful to not make too many excuses for myself... I have a house to keep up and I don't want to lose Audrey forever in a pile of unfolded laundry. You laugh, but it is ever a real danger for the small people in my house. Left unattended for too long, they may sink into the quicksand of my clutter.
Posted by Taryn at 9:28 PM No comments:

Email ThisBlogThis!Share to TwitterShare to FacebookShare to Pinterest
Labels: at home, family, motherhood

Graduations and Other Celebrations

Wow, we've already checked off the first of our three trips for the summer! We were looking forward to our week in Rapid City for so long, I can't believe it's already behind us. But we jam-packed the week with everything we planned... and several exciting things that we didn't plan!

On Friday night, we arrived at Lisa's house- a neighbor and friend of the family who took us in for the weekend so that the graduation party at Grandma and Grandpa's was more manageable. (It's beyond me why Grandma thought she couldn't keep the house clean with five extra adults, four children, and their stuff around... ha ha.) Monica, Glenn, Megan and Nathaniel were back as well, so it was almost a complete family reunion!  Audrey enjoyed seeing her Auntie Megan again, and Megan was relieved to know that Audrey didn't hold a grudge after being abandoned. They picked up right where they left off! 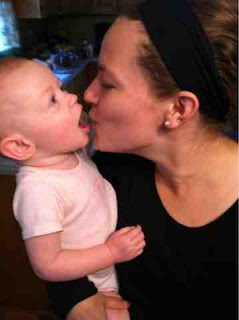 Lisa treated us like family, bringing out all of her kids' old toys, making us breakfast and telling us to help ourselves to anything in the house. We really can't thank her enough! I can't imagine being more comfortable and cared-for anywhere else in town.

The main events of our visit were on Saturday and Sunday; for Patrick's high school graduation we celebrated with a party on Saturday and the Mass and ceremony on Sunday. It's pretty amazing to think about how much Patrick has changed since I first met him, and it's a little scary how much he looks like his older brother! Patrick, we are so proud of your accomplishments, and your nephews and niece simply adore you. You will do great in college, we can't wait to see where God leads you next!

Patrick played in the State baseball tournament Monday, so he, Paul, and Paul Sr. literally left directly from the grad ceremony to drive to Sioux Falls. That left the rest of us to chillax and have a movie night in watching Les Miserables. We put the kids to bed before the movie started, but poor Max could hear the amazing music coming from the next room and couldn't seem to keep himself in bed! He had to "use the bathroom" at least three times before he dropped all pretense and asked me directly if he could listen to one of the songs. Good timing on his part- I was willing to let him watch On My Own before tucking him in for the final time.

Monday was a quiet, rainy day. The Chicago crew had hit the road at an ungodly early hour, so the rest of us hunkered down and made the best of a sunless day. We built forts with Liam and Grandma, went "fishing" in a blue blanket "lake", read stories and ate snacks. Just as our creativity was about to run out, Lisa showed up with an armful of games! Then things cleared up enough to take a walk to the park; we were all really glad to get some fresh air. Later, I visited with my dear friend Talia and got to catch up on life over a cup of coffee. So awesome to see her. Then I went back and watched an online live broadcast of the Cavs winning the state championship! Patrick pitched the entire semi-final game, and boy did he pitch it. Mad skills, I say, mad skills. 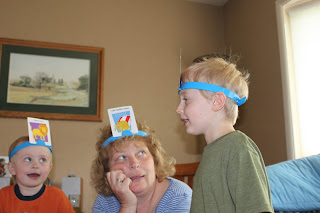 The big boys returned at about 3am Tuesday, but they were troopers and didn't sleep the whole day away. We got a slow start and then spent the rest of the day at Reptile Gardens. I wish we could have stayed longer. Sadly, I only remembered to take one picture the whole day. I call it "Improvisation": 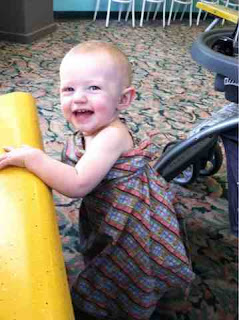 Yes, I forgot to pack her an extra set of clothes. No, I didn't want to go back to the house to change her after she made a mess of her only outfit. So yes, she is wearing my nursing cover as a dress. But hey, she's so cute, she'd look good in a paper bag! (Now that's an idea for next time...)

Max watched the bird show, the alligator show and the snake show, all in succession. He saw poisonous frogs, humongous bugs and (terrifying, disgusting) really cool spiders! He was like a sponge... and I regret to say that his next school unit is unequivocally Snakes and Bugs. Lucian spent most of the day playing on the playground and in the sandbox. He's not quite as interested in creatures as his big brother, but he had a great day nonetheless.

Later in the week, we made our annual trip to Storybook Island, one of the highlights of every Rapid City visit. I gave the camera to Paul, a sure way to actually get the day documented. Max has grown leaps and bounds in his climbing ability since our last visit; he didn't meet a structure he wouldn't climb. He wanted to be on the top of everything! Lucian sure did his share of climbing as well, but his highlight was the real live train that drove them around the park. He asked to ride it the moment we got there, and it's always the first thing he mentions when we ask him about his visit. I'll save the Storybook pictures til the end, since I had trouble paring down the number.

We got to spend an evening out with our good friends the Daniels before they jetted off to CA, and the boys and I spent a windy, cloudy afternoon with Bridget and her kids at a McDonalds play area (perfect: the kids were contained and we could talk.)

The big surprise of the week was that we were able to attend the diaconate ordination of Grant and Jonathan! We didn't know when we scheduled the trip that the ordination would fall smack in the middle of our week in South Dakota. How awesome! And what a blessing to our church these two men are. My heart felt so full during the ordination Mass; with all of the mess in the world, there are still people willing to give up everything for God. Alleluia, praise the Lord.

We also met up with Paul's high school friend Sam and his wife Joan, another couple that we wish lived several hundred miles closer to us. They are expecting their first baby in August, and I even got to crash her baby shower before we left!

We spent the remainder of the week relaxing and enjoying ourselves, but as always, Saturday came before we were ready. It was another wonderful visit to the Black Hills, our home-away-from-home. 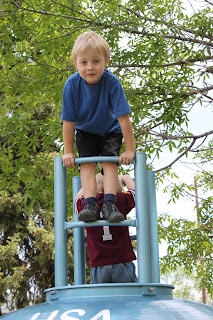