Our last official unit of the school year was Buildings and Architecture. We learned about all kinds of buildings: pyramids, castles, houses. But mostly we learned about skyscrapers! We read books about how skyscrapers were built, we built our own skyscrapers out of everything we could find, and we learned about the skyscrapers right in our own neighborhood. When my grandma (Max's great-grandma) heard what we were studying, she had a genius idea. Why not take a tour of the tall buildings right in her neighborhood? She and my grandpa live in a 16-story condo in downtown Minneapolis, so we had the perfect starting place. We met my mom there on Friday morning and we set out to see the city from up high!

First we took the elevator to the top floor of my Grandma's building, then up a few steps to a door leading onto the roof. It was windy and cold but Max ran from end to end oblivious of the chill, pointing out the tiny trees below and claiming to see the Statue of Liberty off in the distance!

Since the weather threatened rain any moment, we took the skyway route to our next stop, Macy's 12th floor. The skyway trip was an equally exciting part of the day; Max stopped to sip from every drinking fountain and examine each piece of artwork he passed. He had an endless stream of questions for Great Grandma and she fielded them like a pro... I was sure glad to pass the buck for a day! Instead of answering incessant questions I just got to push a stroller and enjoy the walk.

The top floor of Macy's houses a cafeteria-style restaurant called the Sky Room. Its walls were painted blue with clouds, and it had huge windows on three sides for a great view of the city. We ate lunch while we checked out the sights. (though I think for most of the workers on lunch break, my kids were the sights during that hour)

On our way to lunch, my mom had called my uncle who works on the 42nd floor of the IDS Tower in downtown to see if he was around. Sadly he wasn't in that day, but he gave us the name of his secretary and told us to go on up and she would show us around. So after lunch we got to walk right past the sign saying "Private offices- no viewing beyond this point" and hop into an elevator bound for the floor Forty Two!

Ho--lee--cow. Forty-two floors is really, really, really high!! I felt a little woozy the whole time we were up there, but Max wasn't fazed. To give you some perspective, in the photo below you can see the Foshay Tower, 607 ft tall and formerly the tallest building in Minneapolis. Doesn't it look kinda shrimpy?

We even got to see the St. Paul Cathedral far off, and we pointed to the general area of our neighborhood, although Max didn't quite understand why we couldn't actually see our house. When we had gotten our fill of dizzying heights, we squeezed back into the elevator (pretty sure they didn't build it with a double stroller in mind) and onto firm ground again. Since the rain had never come, we took the outdoor route back to Great Grandma's condo, taking a pit stop at some cool big rocks outside one of the buildings on Nicollet Mall. I mean, what kid can pass up the chance to climb onto a big rock?

We took a snack break at Great Grandma's before heading out. As soon as we were all in the car, the downpour started! The timing couldn't have been better. It rained pretty much the rest of the day, but we had gotten clear views and a nice walk outside before the storm. What an adventure, and what a perfect day. What other kid gets to take a tour of Minneapolis with his Great Grandma?? Thanks for showing us around Grandma; Max will not soon forget it.

Email ThisBlogThis!Share to TwitterShare to FacebookShare to Pinterest
Labels: adventures, family, Love to Learn, Max, out and about

We have just introduced our children to a mainstay from our college days... the Llama Song! (Listen at your own risk, it's quite catchy and incredibly annoying)

We brought it on ourselves, we really did. Max really likes llamas, especially since watching The Emperor's New Groove. What with all the llama talk around the house, both of us have been sporadically breaking out in song,

Half a llama, twice a llama
Not a llama, farmer, llama
llama in a car, alarm a llama, llama, duck!

The kids have their own version, which goes something like this:

Email ThisBlogThis!Share to TwitterShare to FacebookShare to Pinterest
Labels: at home, Lucian

My oh my, he's three years old and he is still going strong on the one-liners. I'll do my best to write them phonetically, but there are some doozies! I'm not even going to make you guess them, because let's face it, you wouldn't stand a chance with half of them!

1. Offie - Lucian's pronunciation of his dear sister Audrey's name. "I yuv you, baby Offie!" is a common refrain, as is "NO, Offie! That's MINE!"

2. Didi duh-dee-um - Lucian's rendition of "Children's Museum". We have a pass to the Children's Museum in St. Paul, so we try to go as often as we can. When Lucian tells me he wants to go to the didi duh-dee-um, I stare at him blankly for several minutes before the lightbulb finally clicks on.

3. Roskeeta Bug Bug - The ever-popular Okee Dokee Brothers have a song about Rosita the Skeeta, and Lucian's version of the chorus sounds something like this: "Roskeeta a skeeta/ ay no skeeta fweeta/ but she's a nameeta/ Roskeeta Bug Bug!" (I'll let you guess the original lyrics!)

4. Paypus! - Each night during prayers, we say a litany of our family's patron saints. After each name, we all say "Pray for us!" Lucian is enthusiastic and energetic in his responses; I hope the saints can understand his language!

5. Das a bumma- He hears "That's a bummer" all the time, and like any child, he repeats what he hears. It's way cuter coming from him than from me.

6. You are ba-dem ba-det! - During Lent, the boys took up acting out the Stations of the Cross. Most often, Max plays Jesus and Lucian plays Pontius Pilate and the soldiers. I fill in as Mary, Veronica, Simon of Cyrene, the Women of Jerusalem, and I announce the stations. When I announce the first station, Jesus is Condemned to Death, Lucian/Pilate points a finger at Max/Jesus and shouts, "You are ba-dem ba-det!"

I don't know how much longer we will be able to enjoy these Lucianisms, because his language is getting clearer by the day! His mannerisms are much older than his age, so I am thankful he has a baby face and a baby voice... it makes it seem like he's not growing up quite as fast as he is. 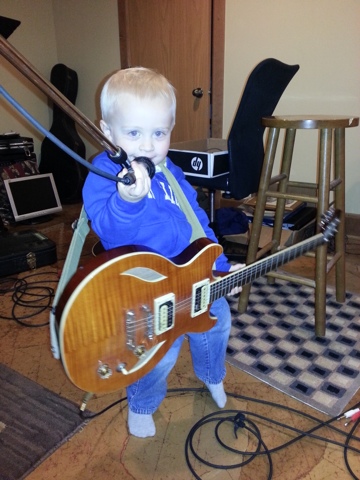 Email ThisBlogThis!Share to TwitterShare to FacebookShare to Pinterest
Labels: Lucian 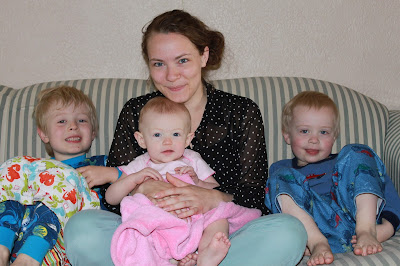 I would say it's been quiet around here without you... but that's not the case at all! It seems that having one less adult around the house has amped up the volume and the craziness. Our first Sunday Mass without you was an hour of acrobatics, and believe it or not I think it was Lucian that had the toughest time that first day. No matter how many times he yelled "NO, Auntie!" at you, he always loved you so much. He just had a passive-aggressive way of showing it. (Now where on Earth did he get that??)

It is so hard to believe that you moved in before Audrey was born, and that this has been her longest stretch without you! You were there at the hospital when she came into the world, the very first family member to meet her. You guys became the best of buds, especially every day from 6:30 to 8:00 pm. If you could be a fly on the wall, you'd see that my kitchen is one big disaster since you left because Paul and I got so used to you swooping in to hold a baby while we cleaned up after dinner.

I don't know if I ever told you this while you were here, but I'm so thankful that my mood swings during the last few weeks of pregnancy and the first few months of Audrey's life didn't affect your opinion of me too much! You got to see me cry, lose my temper, and (my personal favorite) sit in stony silence when I got upset about something trivial. It was probably hard for you to live with a couple of introverts, but it was amazing for us to have someone full of life and energy to jump in when we needed a break from our Energizer Bunny children.

Life is going to be different without you here. We will survive- we're starting to get into a routine with just the five of us- but I still expect to see your car parked outside when I glance out the window. I still assume the boys are waking you up when they stomp around the living room at 7 am. I miss the constant supply of heavy whipping cream in the fridge, because I never think to buy it! But most of all, I miss seeing you spending time with the kiddos... they so adore you.

We miss you, Megs. It was a great year, but you have greater things yet to come! 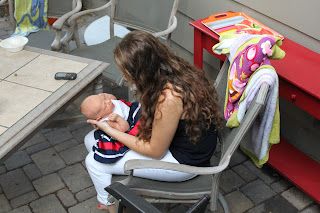 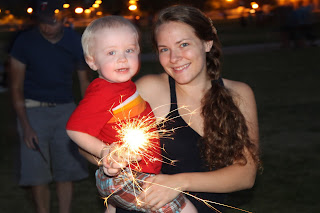 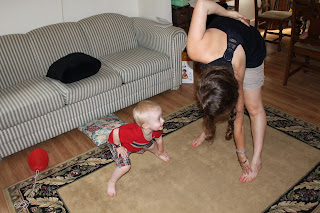 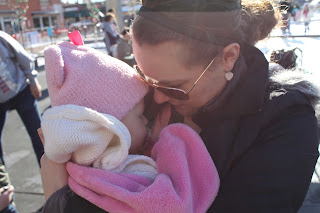