So we have a little girl. And she has two big brothers. And her brothers like potty humor. Why did I think I'd be able to avoid this new problem? At only 21 months of age, she thinks flatulence is hilarious. Every time (and I mean EVERY time) she hears someone pass gas... or even something that sounds remotely like that noise... she gets the giggles and says, "Toot! Hehehe, toot! Toot!" Even the sound of popcorn popping reminds her of toots and makes her laugh like crazy.

And it doesn't end with gas. Yesterday she wore a pair of pants with a kitty on the bottom. Don't worry, decorated bottoms will not be allowed on my children past toddler-hood. But she loves the pants and spent the morning trying to see the cat on her behind... as you can imagine, it looked pretty funny. At one point during this endeavor I exclaimed, "You have a kitty-bum!", which sent her into a fit of giggles and requests to say it "Again! Again!" 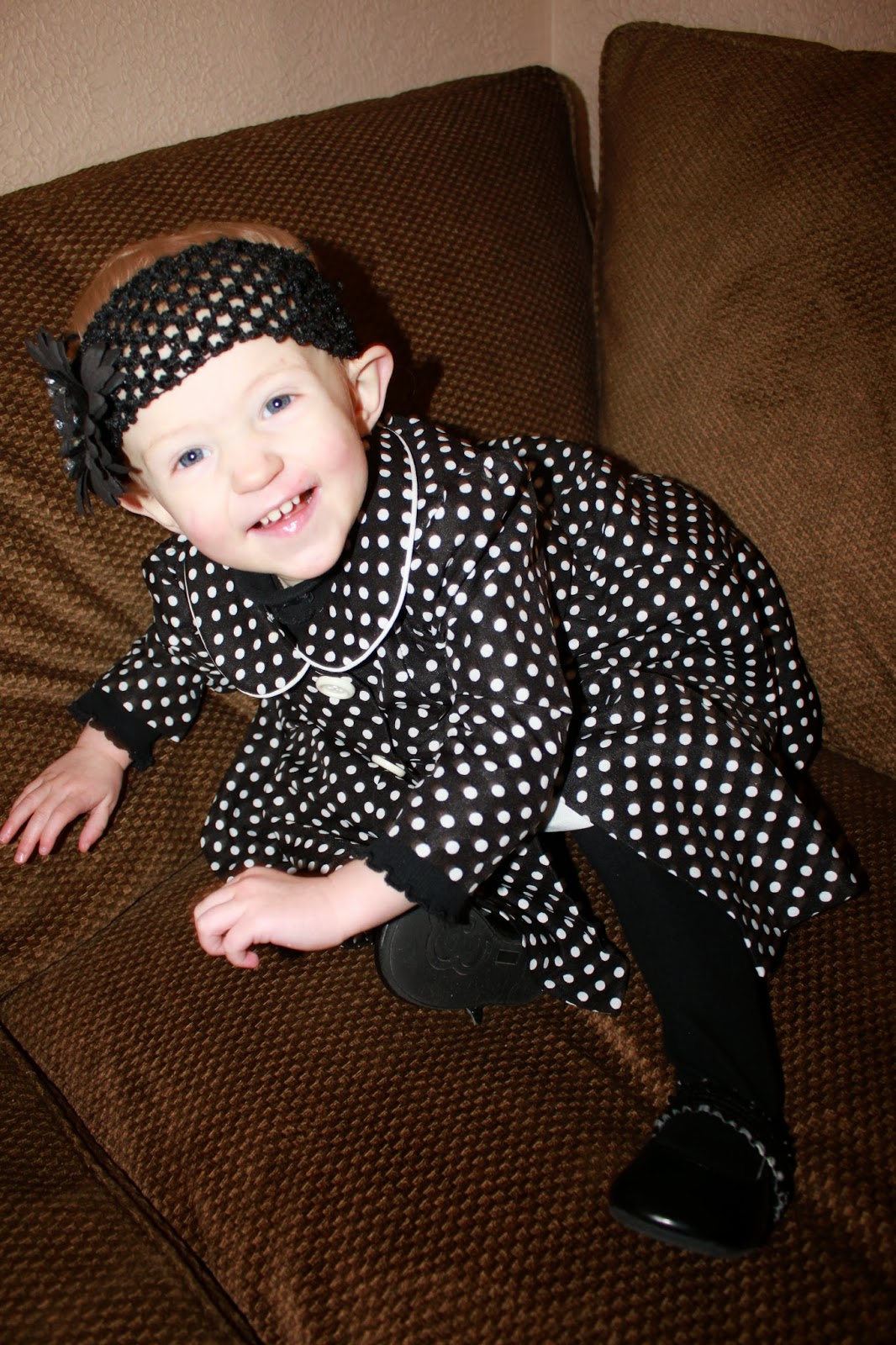 Oh yeah. Then there's her obsession with the bathroom, especially when it's occupied by me. Sure I try to keep the door closed, but inevitably one of the boys will burst in and then leave it wide open when I shoo them out... and up pops little Ethel, questioning, "Poooop? Pooooooop?" None of your business, little girl. 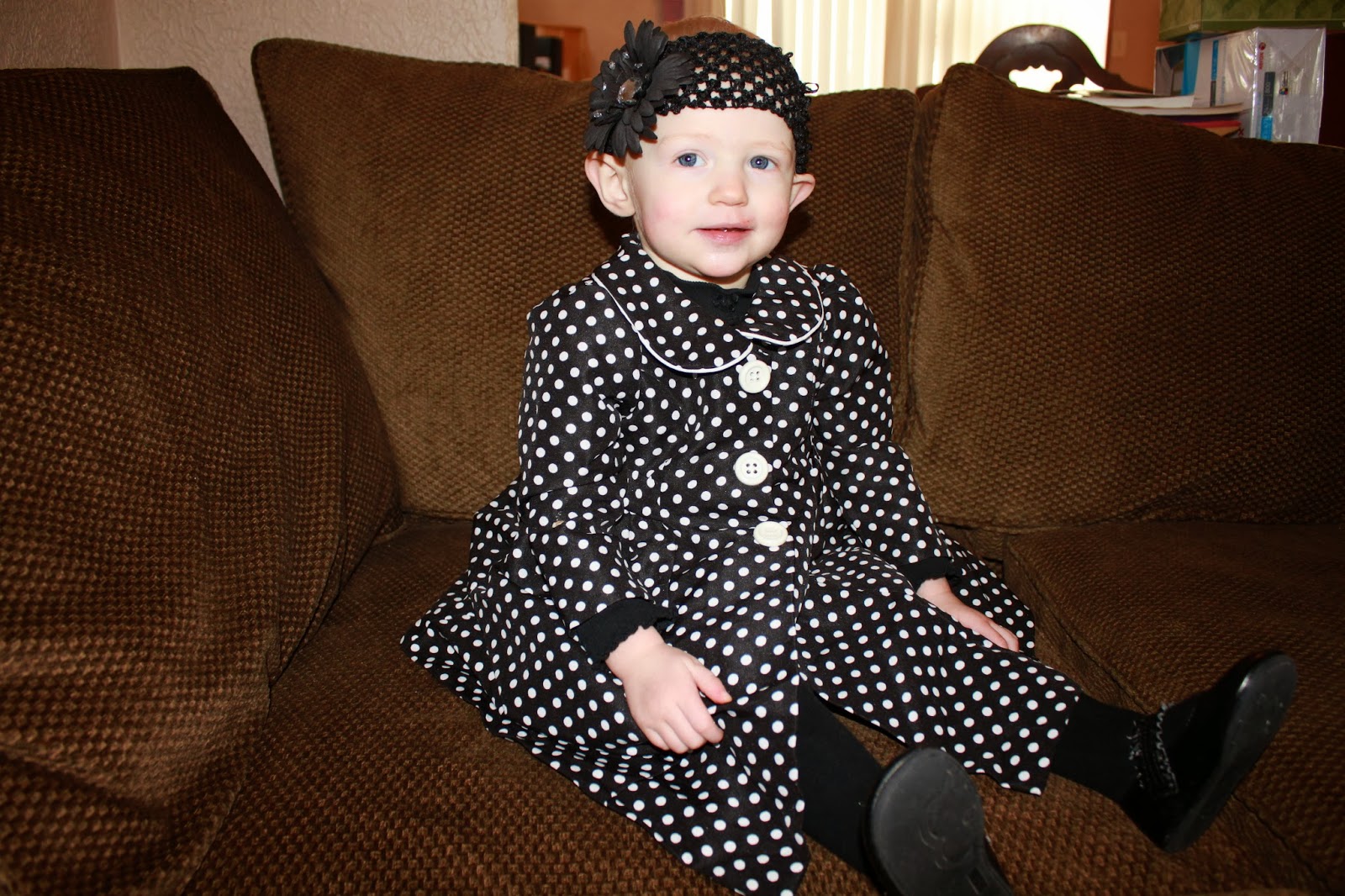 The one upside of this fascination with all-things-potty is that she is quick to inform me when she needs a diaper change. I don't think she's necessarily uncomfortable, I think she just likes talking about it. She'll even go so far as to grab a diaper, grab the wipes, and lie down on the floor waiting for me. I guess the potty humor is inevitable in a house overrun with boys, but any thoughts of having at least one ally who wouldn't stoop so low are now squarely out the window. 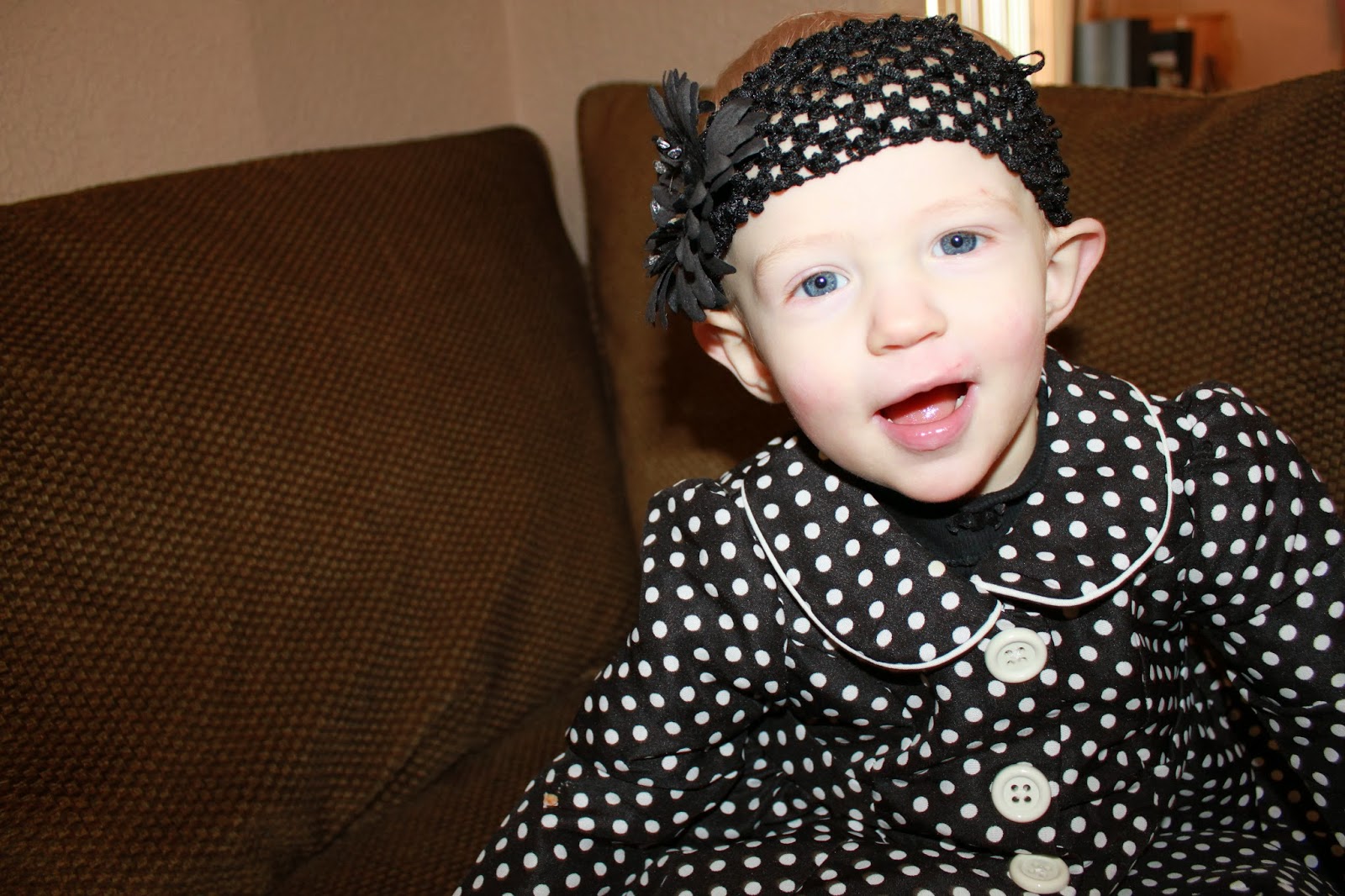 Note: This post is about my experience and only my experience. I'm not trying to make any sweeping statements about what it takes to be a good mom, only what I have found I need to do to be the best mom for my kids.

It's been a rough week. More accurately a rough couple months, on and off. It seems that since I've been feeling better and getting my energy back, my kids decided it was time to let me have it for abandoning them for so long. Max has come out with this new attitude since turning six, and it has been a scary foreshadowing of what it might be like to have a teenager. I ask him to do something, he looks straight at me, and then walks away without doing what I asked. Or if he does decide to do what I asked (usually this involves trying to get out of the house to get somewhere), he gets lost between my instructions and the follow through. I say, "Max, please go find your boots." He wanders off to (presumably) look for his boots and then spots an interesting book lying in his path. Boots? What boots? I decided that if he was a superhero, his name would be Dr. Distracto. 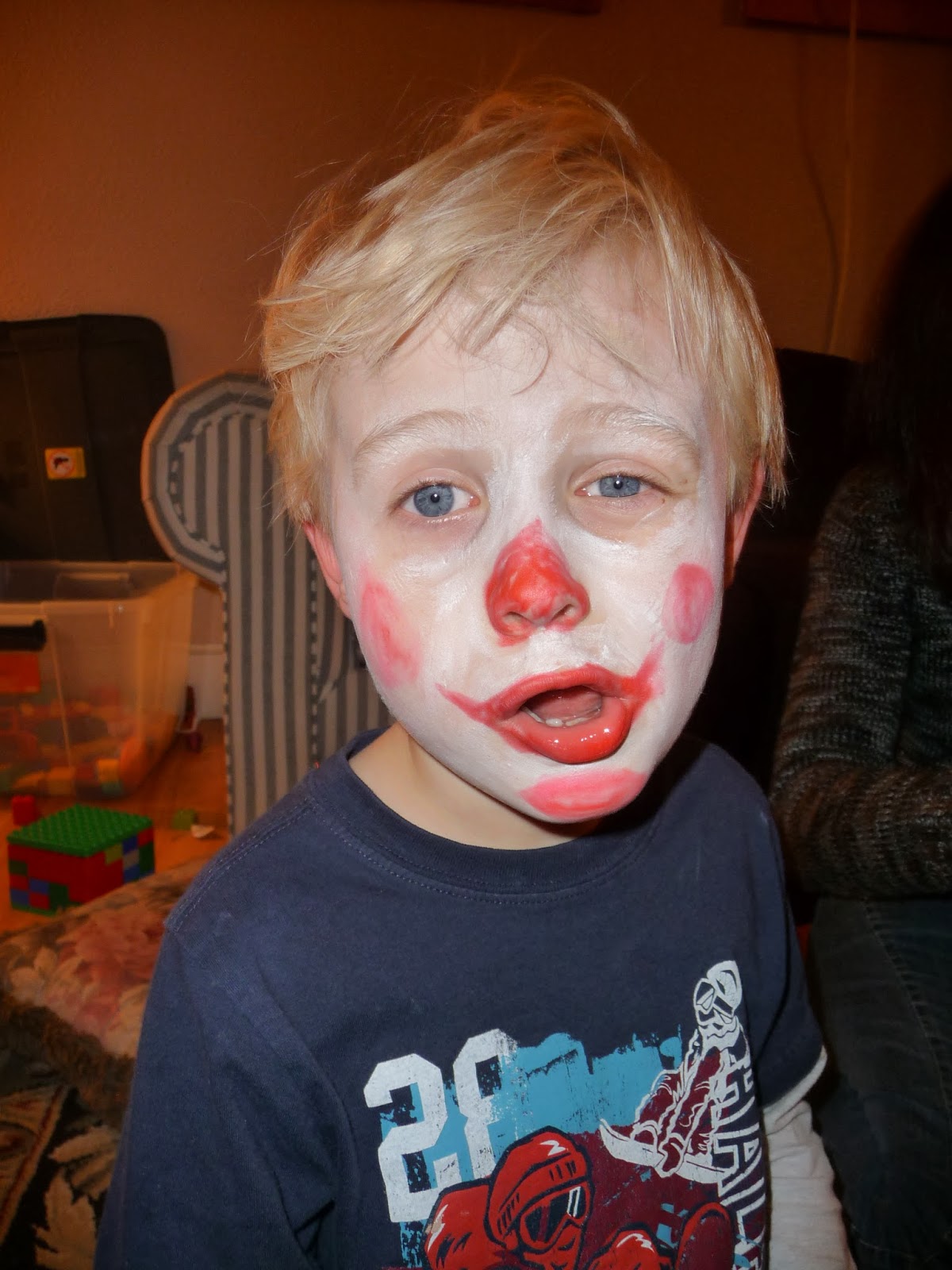 Lucian, also known as Captain Foghorn (if we're sticking with the superhero theme), can go from zero to sixty in less than a second. Wrong flavor of yogurt? End of the world. Jacket laid out wrong? How dare you, Mom. And his whine is no regular whine, it is ear-splitting. If he wants to be heard, he will be heard. And he will make everyone else's life miserable in the process. 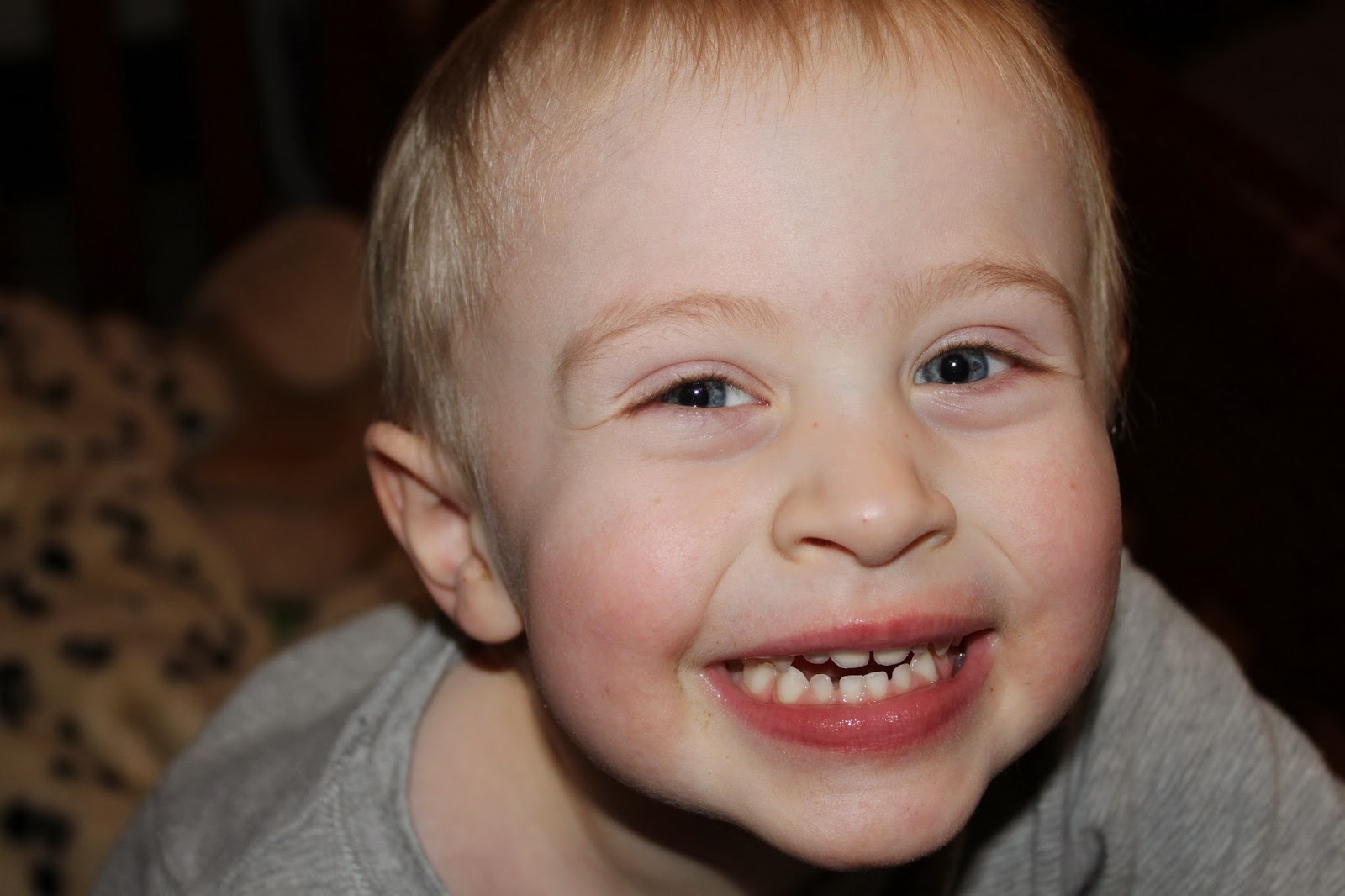 And then there's The Invisible Woman. Dear, sweet little Audrey. At home I can handle her pretty well... but in public? She has a fascination with going where I've asked her not to go, and going there as quickly as possible, as soon as I turn my back. I've lost her in the library more times than I can count. She thinks it's hilarious. 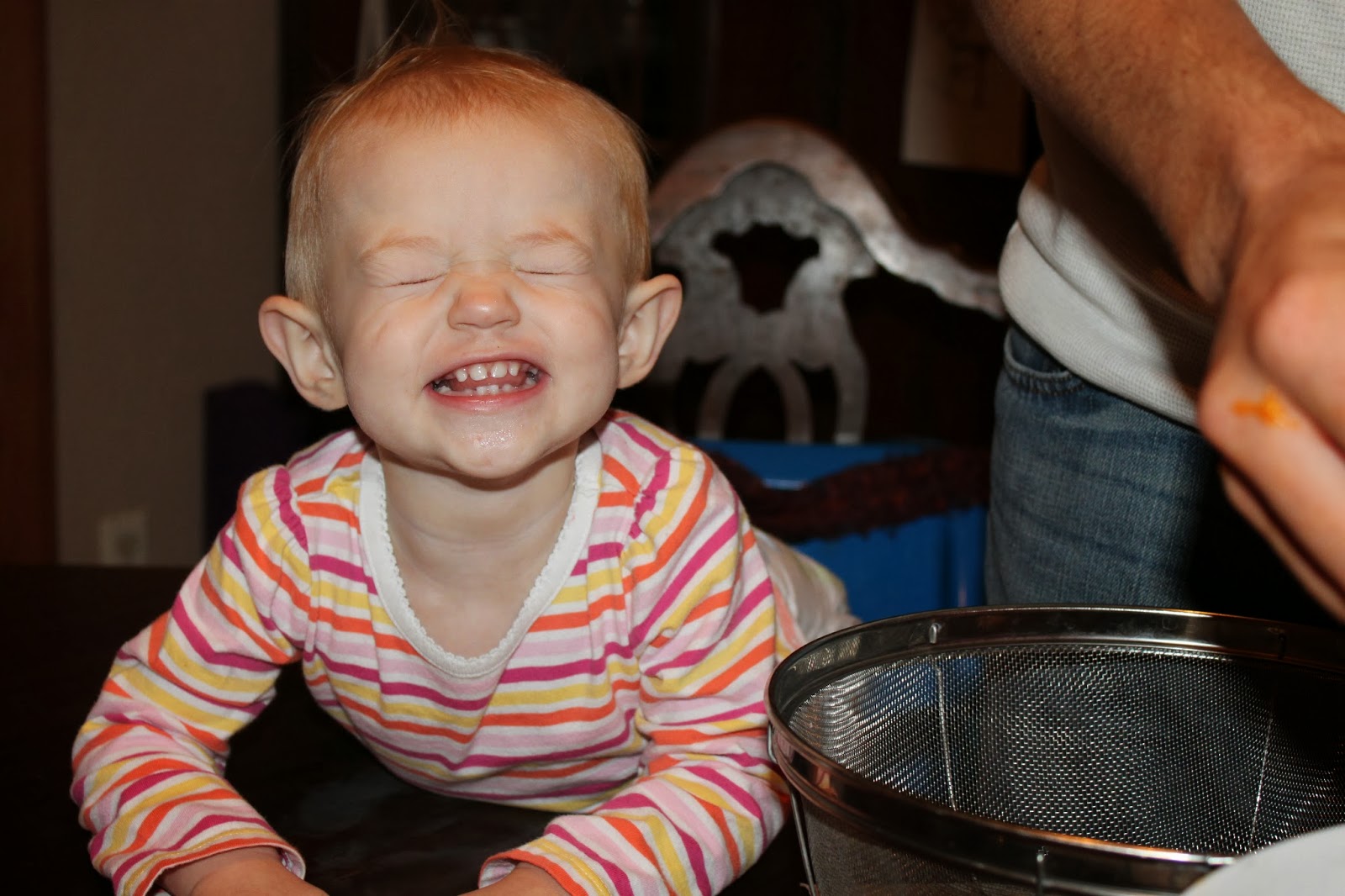 Lately I've been telling myself that I need a mental break. I need to take a personal day, or a personal week. I need to get away from these little children who are driving me crazy. But it came to me rather suddenly that a break from my children is actually the last thing that I need. Spending more time away from them in order to solve a problem that began by not spending enough time with them? It makes no sense. Sure, it would be nice while I was gone... I can almost picture the joy of using the bathroom all by myself. And how amazing would it be to fix only one breakfast in the morning, rather than fourteen? (My children, especially Lucian, are Hobbits at heart.)

But I would return to the same problem that I had left. My kids are acting up, and I firmly believe it is because I haven't been mentally present for some time now. I am trying to give them as much of my time, as much of myself as I can, and I believe we will get back to where we were. I will work on my patience by dealing with the issues that bother me, rather than dreaming of an escape. I will look at my little superheroes and, rather than seeing only the single trait that is making my life difficult at the moment, I will notice the incredible gifts they have to offer to the world. (Because they really are pretty super, aren't they?) 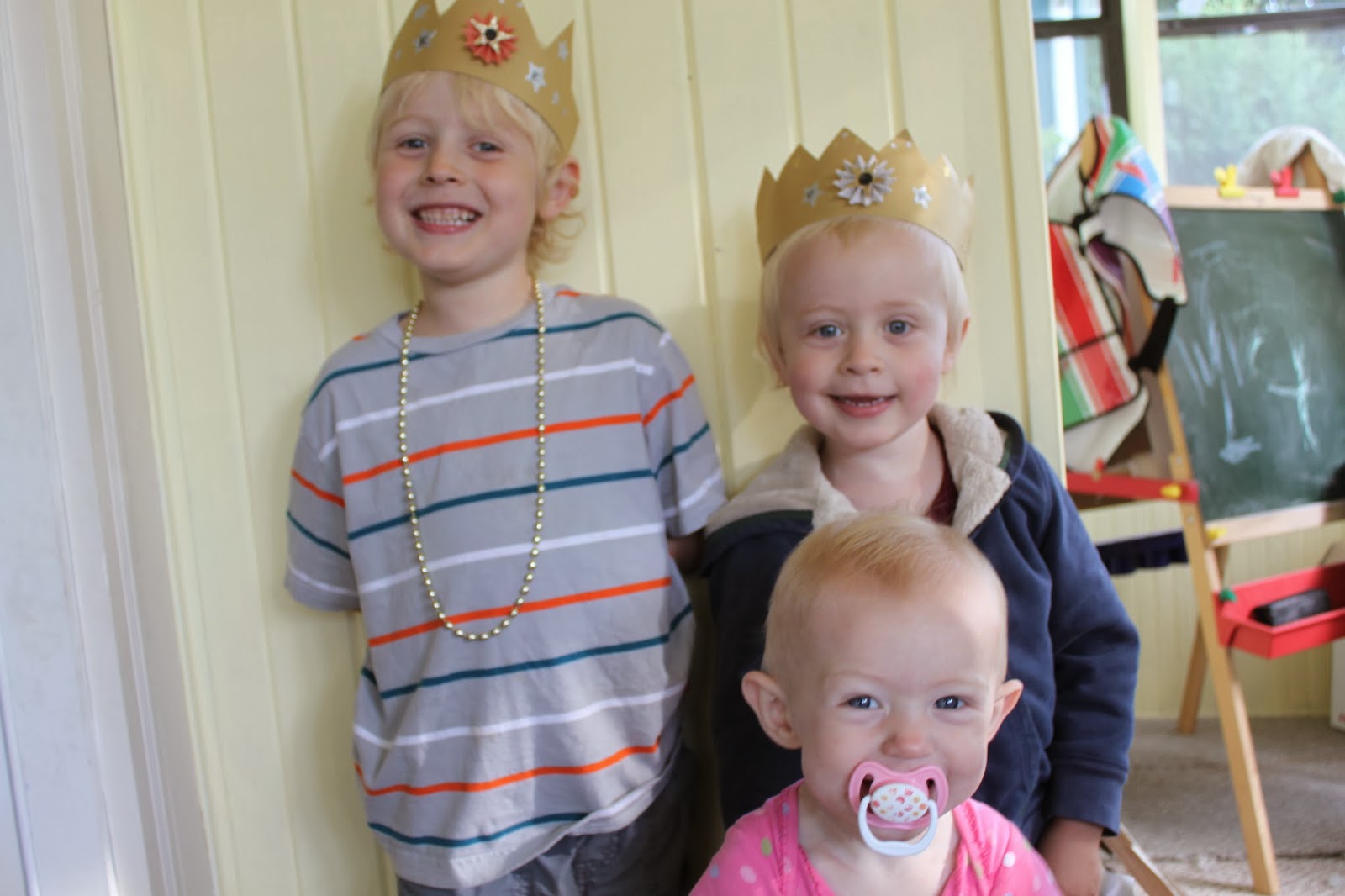 December and January were a crazy mess around here, so we had to look into February to find a time to celebrate the boys' birthdays with their friends. Max requested a dinosaur theme, while Lucian wanted trains. I decided to ask if they minded celebrating together, and I was a little surprised when they jumped at the chance. "We can have a Dinosaur Train party!" was the instant response. Well that makes it easy.

On Sunday, a pile of friends and cousins showed up to play games and eat treats with us. Everyone seemed to have a great time, and I know I had a lot of fun! I really am a kid at heart; planning party games is one of the highlights of my year. This year, the kids colored train tickets and took a ride on the Dinosaur Train through the Mesozoic Era, hunting for T-Rex bones. The train stopped at each period (Jurassic, Triassic, Cretaceous. Right? Whatever.) and the kids all had to complete an activity to earn bones. At the end, the amateur paleontologists put them together to form a whole skeleton!

I don't know about everyone else, but my kids were amped up on sugar the rest of the day. I guess the Prehistoric Punch packed a punch! But it was worth it, and the boys were so glad to spend the day with many of their friends. 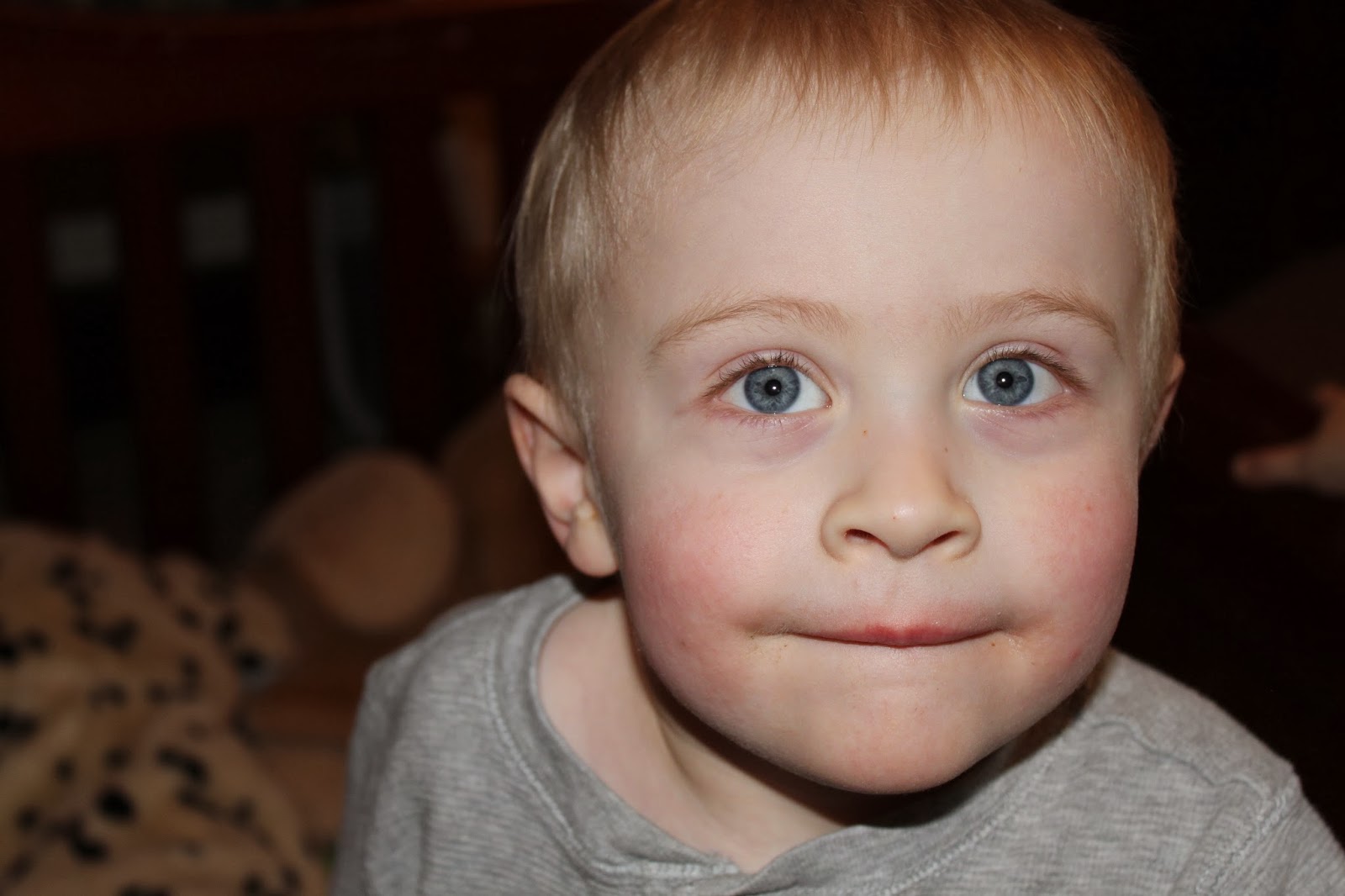 Last Friday was Lucian's big day. He's been waiting with baited breath for his turn to "open LOTS of presents and eat cake." We started off with a date, just me and him, to Caribou Coffee and the library. Then we met up with Grandma for a cupcake before lunch! Later, in lieu of the usual audiobooks or music for rest time, the boys got to watch a movie... unheard of around these parts, and the cause for much celebration.

Grandma, Grandpa and Uncle Ben came over for dinner and presents. Talk about gourmet: Kraft mac 'n' cheese, hot dogs and cooked carrots. When Grandpa asked him if he picked the menu, he clarified, "I didn't say anything about carrots."

The presents were opened after dinner, including (but not limited to) a total of three new board games! Thanks to some willing family members, the kids got to sample all three games that night before bed. Thanks to good luck on our parts, all of the games turned out to be relatively short and painless... and dare I say, a little bit fun? Now, I love me a good board game... but I've about had it up to here with Lucian's all-time favorite, Candyland. These new additions are a welcome change to our game closet: Zingo, Sequence for Kids, and the Sneaky Snacky Squirrel game.

Lucian, for the past year you've been telling me all about the things you'll do "when you turn four". To my relief in some cases, and amazement in others, you reached many of your goals before your birthday: including potty training, giving up your paci, spelling and writing your name. In your mind, age four is a major milestone, making you suddenly a big boy. So I can't wait to see what new goals you set for yourself. What's in store for you this year? I think it's going to be a big one. 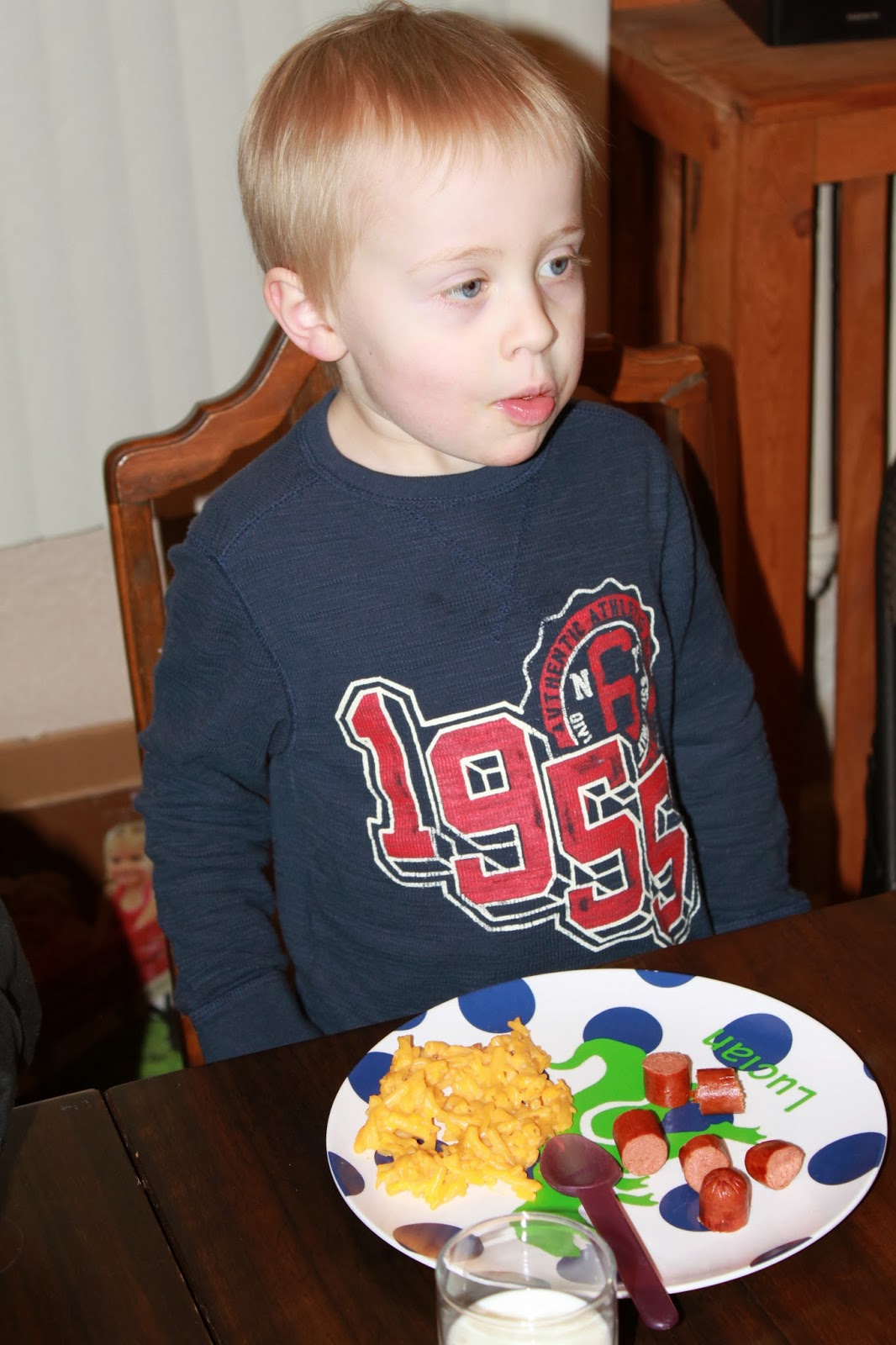 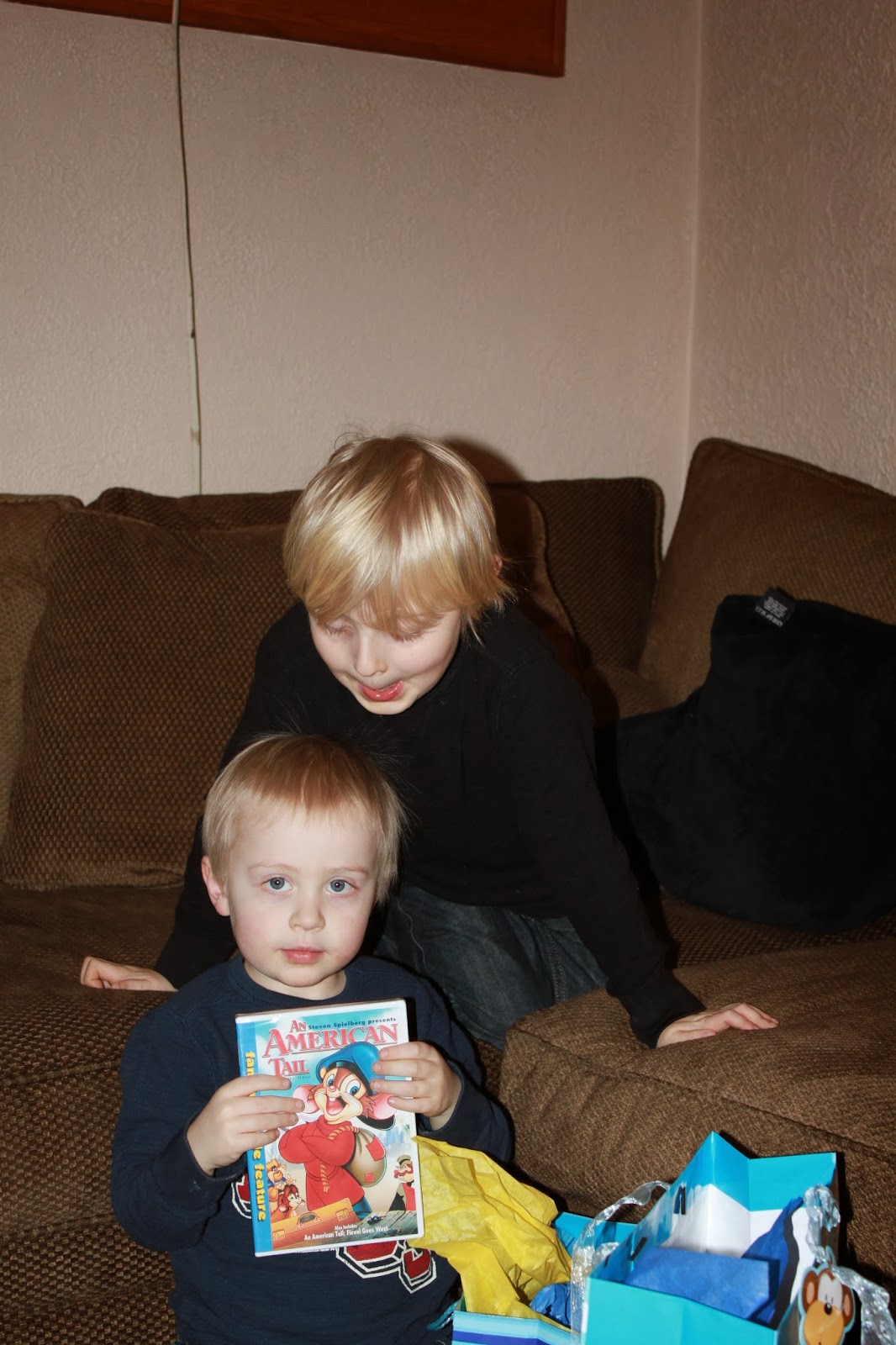 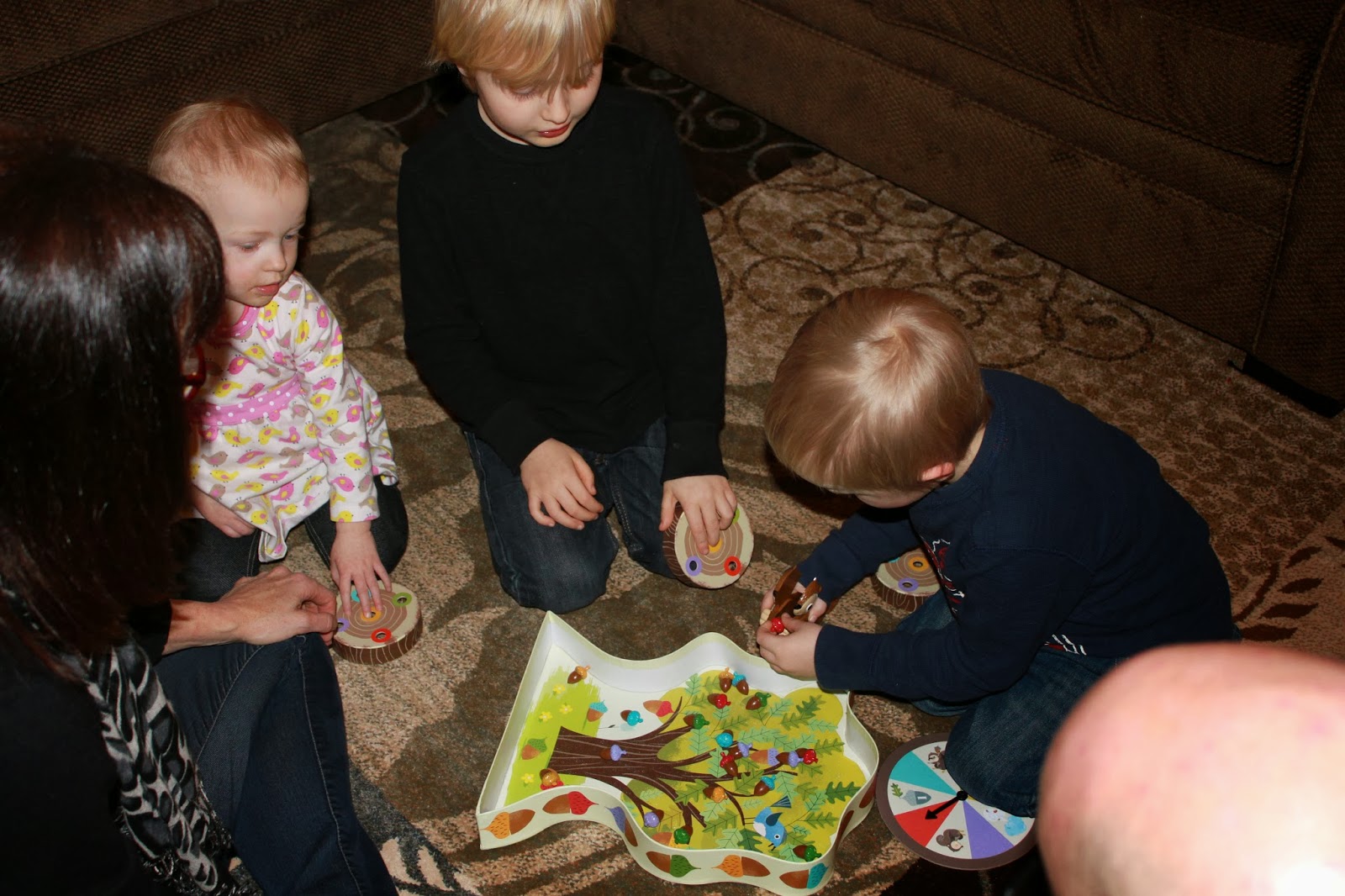