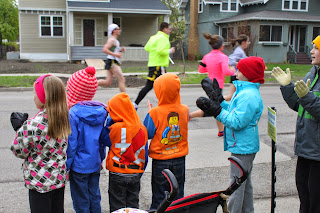 Out of the blue, my husband became a runner. I swear, it happened overnight. He started running to help get his leg back in shape after an injury and he just kept going! Then his friend Ryan invited him to run the Fargo Half-Marathon with him, and the rest is history. I knew it was for real when he used his birthday money at REI for running gear rather than camping equipment... who is this guy?!

Last weekend was the big day, and the whole family decided to go with and cheer him on. I was a little nervous about being in charge of all four kids by myself, but Ryan's wife Maggie assured me there would be plenty of help, so away we went! We were invited to stay with the Norrells at Maggie's sister's house, which we were so grateful to be able to do, especially since the nearest hotel with any openings was 45 minutes away from the race site.

All in all, there were 19 people sleeping in the house Friday night, but Patty and Steve and all their kids graciously shared every available floor and couch to make room for everyone. They grilled a delicious dinner for the whole crew Friday night, and besides the meal I barely saw my children... they were busy playing with all of their friends!

Saturday morning, Race Day, Paul and Ryan left early to head to the Fargo Dome and get ready. That left Maggie and myself to get a pile of kids up, fed, and in the car by 8:00 AM to make it in time to hopefully see our husbands run by. I had no idea what to expect, and frankly I was pretty worried about the whole scenario, but it worked out beautifully! For starters, Maggie's two youngest kids stayed home, and three of Patty's older kids came with, so there were ample hands to hold children and push strollers, leaving me free to snap some photos!

We parked a block from the race course (alleluia!) and walked to a spot around Mile 5 to wait for the runners. The kids started high-fiving any racer that came near, and the smiles we got were priceless! I was so busy watching the kids that I almost missed Paul coming by! He was right in front of us, smiling and giving high fives before I had time to grab my camera... and then off he went again. At least I was ready then when Ryan came by just moments later. 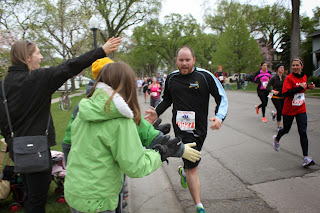 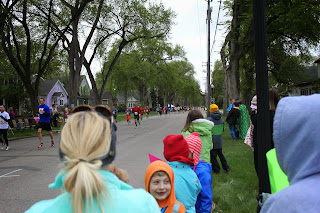 After Ryan passed, we hightailed it one block over to catch the guys on their way back toward the Dome. We set up near Mile 8 to watch and wait again... and pretty soon there cam that bright orange shirt! This time I was ready. 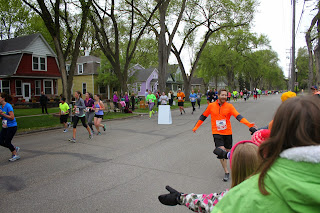 Paul and Ryan flew by, looking great! It was really exciting to see them run, and they both said that they loved having us there to cheer them on. I have a sneaking suspicion that this won't be our last time cheering them on. In fact, it's probably just the beginning...

We left the race with a bunch of chilly kids shortly after that and went back to the house to wait for the runners. We spent the rest of the afternoon relaxing in Fargo, then we set off for home before dinner. It was a short trip, but we packed in a lot of action!

I know my husband isn't big on sappy stuff, but I have to say how incredibly proud of him I am. If you had asked either of us a year ago if we thought he'd be running a half-marathon this spring, we would have just chuckled. He has always been active, but distance running was never his thing... until suddenly it was! He tends to be pretty successful at whatever he sets his mind to.

Congratulations, honey, I am so proud of you!

Email ThisBlogThis!Share to TwitterShare to FacebookShare to Pinterest
Labels: adventures, out and about, Paul 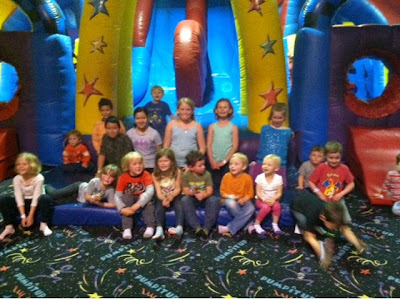 Cousin Isaac just turned four! We got to celebrate with him last weekend, and the boys were so excited to spend some time, in Lucian's words, "with my best friends!" The party was at "Pump It Up", a place with bouncy houses and inflatable slides, black lights and glow bracelets... the kids were in party heaven. After completing the perfect day with some delicious cake, Max informed me that "This was the best day of my life!" 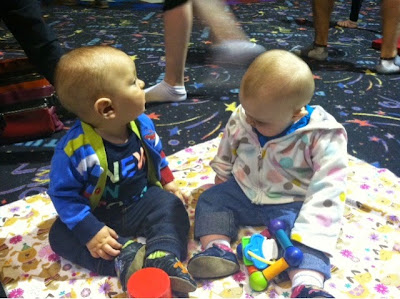 Edith and Sammy got to hang out on a blanket together for awhile, taking in the craziness around them. Audrey tried the bouncy house with Dad and backed right out again, quaking with nerves. Minutes later she wanted to try a slide with me, so we climbed a big ladder and slid down together! I think she was horrified, but she stayed brave and held it together. After that, she was content to be pushed around by Grandpa in a toy car, her feet safely on the ground. I only saw flashes of Max and Lucian as they ran past, chasing their cousins and climbing out of sight. Eventually they settled at the air hockey table, which brought back vivid memories of my own childhood. 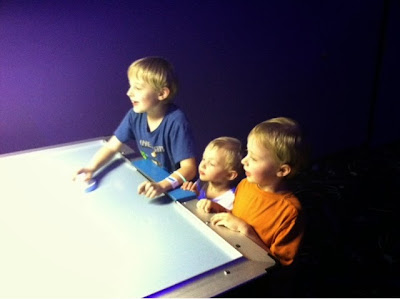 They really have kid parties down to an art at this place. Everyone was shepherded through without a hitch, and the birthday boys (Isaac's cousin Linnaeus was celebrating as well) were rewarded with blow-up crowns, glowing light sticks, and an inflatable throne in which to open presents. But if this party taught me one thing, it's that we don't spend nearly enough time with our cousins! The boys were ecstatic to be able to spend some quality time with Alexander and Isaac. Let's make it happen more often! 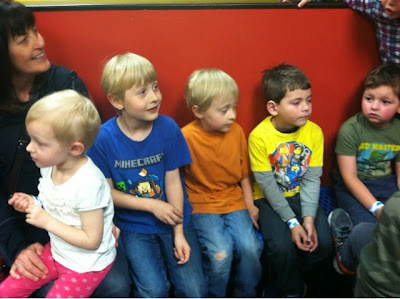