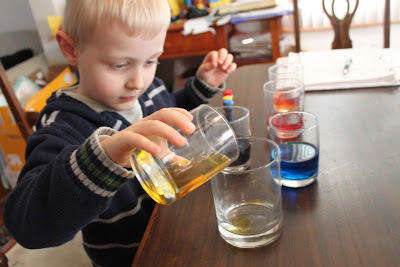 My little scientist came up with his own experiment last week. We were sitting on the couch, having just finished reading a book when he told me he wanted to mix some colors. He needed glasses with water and dye, so I provided. I helped him choose the colors to start with and gave him a quick little crash course in the scientific method. 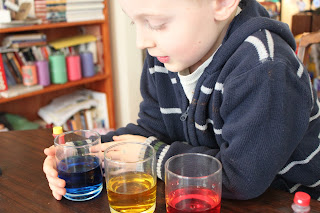 First we chose two colors to mix together, then we made a hypothesis about what the result would be. We poured both into one glass, stirred them up and evaluated the result. Max is a little bit too much like me- he hates being wrong. If he tries to spell a word and writes the wrong letter, he will decide to write another word rather than admit he spelled it wrong! I try so hard to provide an environment in which it is OK to guess and OK to be wrong sometimes, but apparently my genes are pretty strong.

It turns out that this experiment was great practice for Max in being wrong! I made him guess the color that each combination of dyed water would make, and then I wrote it down. No backing out, mister! But I explained that the greatest scientists are wrong a lot! What matters is that they are discovering new things. 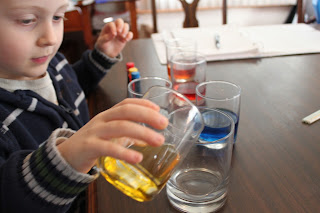 So we picked yellow and red. Max guessed that the resulting color would be brown, but when he mixed them together they made orange. And you know what? He was fine! He simply reminded me that we were making discoveries, and then he moved on to the next combination.

After mixing every possible combination, we decided to dump all of the water together into one big bowl. His hypothesis this time was the same as his first: the water will be brown. And time his hypothesis was correct! He was very proud of himself and asked if we could do the whole experiment again some time. I'm sure we will. 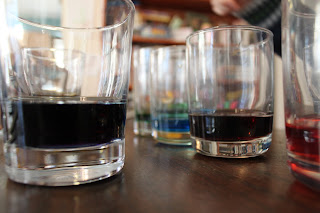 Email ThisBlogThis!Share to TwitterShare to FacebookShare to Pinterest
Labels: at home, Love to Learn, Max