He is risen! And how fitting that we finally have the slightest sense of spring in the air. The thaw has begun just as we celebrate the triumph of Christ over death and darkness. Alleluia!

It is amazing what God can do in just a few short days; I feel like I slogged my way through this Lent, finally getting around to Confession on Holy Thursday and then (surprise, surprise!) everything began to turn around. Mass at St. Joseph's that evening was beautiful (and long). I was trying to hold it together as Lucian whined loudly and continuously about how tired he was and Audrey tried to do gymnastics in my arms. But even with all of the distractions, amazingly I still remember the homily! And to top it off, there was an older woman behind me who made a point after Mass to tell me how wonderful my children behaved. I mean, she really meant it. I was pretty shocked, but boy it was nice to hear.

On Good Friday I joined two friends for a prayer vigil at the Planned Parenthood in St. Paul. This was my third year at the vigil, which is a collaboration between many Christian churches in the area. Hundreds of participants process in a circle while taking turns carrying a large wooden cross. Every half hour a different pastor led a group prayer and reflection. My friends and I noted how difficult it was to pray a rosary with all of the external noises from the counter-protest, and it made so clear to us how distracting the voice of the world can be.

In the evening, the whole family went to the Living Stations of the Cross put on by the Servants of the Cross in Oakdale. The stations were geared toward children, and the participants ranged in age from 6 to 23. Max barely moved a muscle during the entire 14 stations, and the first thing he said when it was done was, "Can we come back every year?" He and Lucian have acted out their own version of the Stations at least twice a day since then.

On Saturday we traveled to Marshall to spend the night with my mom's parents, and the boys got to fly their first kite of the season. Leave it to Grandpa to find a pirate ship kite! We were treated to a delicious dinner and the kids thoroughly enjoyed being doted on by four grandparents and an auntie!

Easter morning began with preparations for Mass; the kids were extremely excited to finally sing their Alleluias again! Miracle of miracles, we got everyone to 9 am Mass on time. The kids were amazing during church... I'm wondering if it had more to do with their excitement about the Resurrection or the eggs they knew were hiding back at Grandma's house? Ahh well, either way it was great for us!

And now we are in the midst of the Easter Octave. We have all been sick in some form since Holy Saturday, and I don't know if the end is in sight yet... but we are still doing our best to squeeze as much celebrating into this season as we can. At the very least, we are making it a point to greet each other with Alleluias whenever we have the energy. 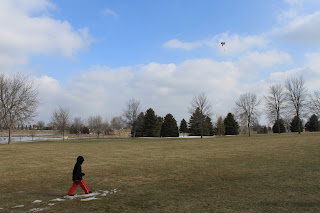 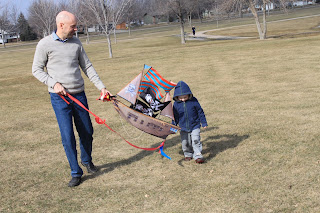 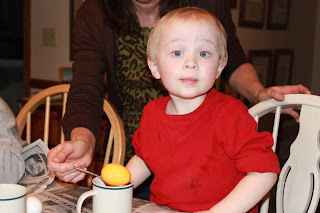 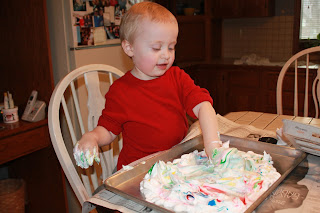 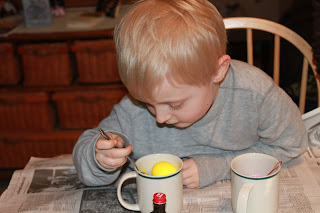 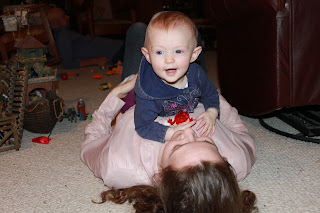 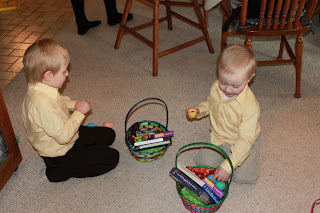 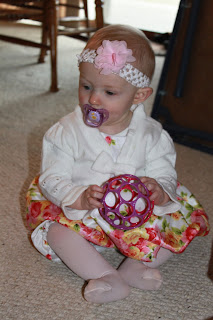 Email ThisBlogThis!Share to TwitterShare to FacebookShare to Pinterest
Labels: celebrations