Getting Back to Nature

It is amazing to me that it's already August and we seem to have spent such little time outside! Generally we do hike more in the fall, but June and July usually get plenty of attention too. I've been a bit of a baby with all of the heat and humidity this year, and carrying around a personal sweat box (i.e. baby) doesn't help the situation. So unless we're near water, our outside time has consisted mostly of me opening the door, kicking the boys out into the backyard, and returning to my air conditioned living room with Audrey. Sad, I know.

But this weekend the temperatures were perfect for some hiking! We took advantage of the beautiful mid-70's both Saturday and Sunday evenings, one day to the "hiking woods" (as Max has coined the path by our house) and one day to Minnehaha Falls. There was lots of rock throwing, stick dragging, puddle jumping and general mess-making, and Audrey slept peacefully in the Moby for the majority of both hikes.

Lucian is definitely not the boundless ball of energy that his brother is, but he still held his own. When the walk got a little long, he hitched a ride on Daddy's shoulders or Megan's back, but he did most of the work himself, trotting along on those little legs as much as he could manage. As for me, I think this is the most exercise I've gotten since before I knew I was pregnant! It feels good to get out and get moving again. Who knows, maybe next I'll start running with Megan and Paul!

Well... let's take things one step at a time. 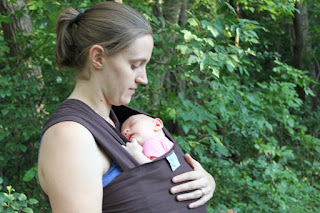 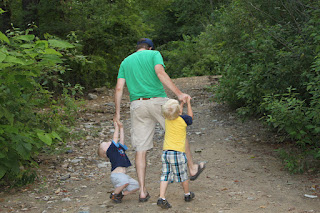 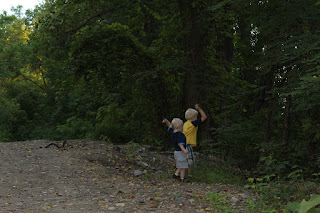 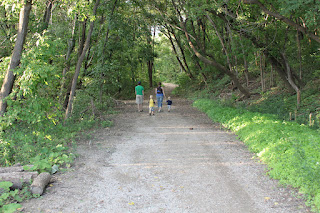 Email ThisBlogThis!Share to TwitterShare to FacebookShare to Pinterest
Labels: family, out and about