Our road trip continued west to the Black Hills, to Grandma and Grandpa, Uncles Patrick and Liam, and many many deeply-missed friends. Our visit started off with a bang and refused to slow down for a full week! We were exhausted by the end of it (Maureen, I hope you have recovered by Christmas for the BIG invasion!) but I wouldn't have changed it for the world.

The boys have reached the age where they can really enjoy the fun attractions Rapid City has to offer, and I think we hit nearly every one of them!.... well, at least the free ones. We made it to town for dinner on Sunday, and decided not to waste any time before visiting the big green Brontosaurus at Dinosaur Park. The boys climbed on the dinosaurs and explored the area until the idea of ice cream was mentioned, and off to Armadillos we went. What a surprise when we walked in the door and our good friends the Trasks were there! We did a little catching up and then made plans for Tuesday, then went home to rest up for a busy day the next day.

Monday began with a trip to Storybook Island, a free story-themed playland. If ever you take a child to Rapid City, SD, this is not to be missed! Hours and hours of fun for not even a dime- how can it get any better? They even had a Treasure Island pirate ship. Max couldn't contain his excitement, flitting from one place to another as if his feet were on fire- the castle to the fire truck to the pirate ship to Pooh's house and back to the pirate ship... it felt like he barely had a chance to glance at everything before it was lunch time. We ate sandwiches on the picnic tables outside the park and then went on to our next destination, the brand new Outdoor Campus by the Games Fish and Parks department. Oh. My. Goodness. I loved this place! Just to give you an idea, there were real animal skulls and a mud kitchen. A mud kitchen! Genius.

As if we didn't start out at a full sprint, we decided to pack a whole week's worth of fun into Tuesday. It was Max's feast day, and we wanted to make it a day to remember. We started with a visit to the "Old West" at Ft. Hayes (99 cent pancakes, corn husking, rope making, awesome.) and then snuck in a nap before checking out the City Center Fountains. The boys enjoyed splashing and playing until we mentioned the idea of cooling off with some... you guessed it... ice cream! And they were out of the water like a flash.

Tuesday evening deserves a post all to itself, but since I was a dunce and never once took out my camera, I will fit it in here. A whole slew of our favorite people from Rapid came over to celebrate the feast of St. Maximilian Kolbe, including another Max! Altogether, there were eleven kids at the Yantes home, but amazingly we had plenty of time to chat with our friends because Uncle Liam took it upon himself to organize  a water fight and a movie with all the kids!! He deserves to be knighted.

The rest of the week slowed down a little: we went to one of Patrick's soccer games, we went back to Storybook Island with Bridget and the kids, and Bridget and I got to have a coffee date like old times- just us and one baby. Talk about "back in the day"! Then on Thursday, the boys went camping. Even with the fire ban, they LOVED it. Max's highlight was the hiking and exploring, but Lucian couldn't say enough about the "campin' tent!" Maureen and I brought out KFC for dinner, since they couldn't cook over a fire. Then we went home and had a girls' night in, watched a silly chick flick that I really can't recommend, and ate fudge from Keystone that I definitely can.

Friday brought a wedding reception for Sam and Joan, our friends who got married in June (beautiful wedding, beautiful couple!!) and who wanted to celebrate with their friends and family in the Black Hills. It was held at Sam's parents' gorgeous home, and we got to catch up with some good friends we hadn't seen in quite some time. Then on Saturday, we got to celebrate with more old friends at Laura and Eric's wedding! Max and Louie stayed home with Patrick and Liam (I know... I was nervous too. Just kidding, the uncles did a great job!) and Audrey came with us. The couple was so joyful, I loved being there to share the day with them! With a baby in tow, we didn't get in as much dancing as I would have liked... but Paul was probably perfectly happy with that. Congratulations, Laura and Eric!

Sunday we went to a Mass celebrated by Fr. Sparks and then took our time packing up to head home. We finally got out the door close to 3:00, with a long, late drive ahead of us. But the kids did great in the car, and when we finally pulled into the garage in the wee hours of the morning, we were all ready to fall into bed!

All in all, I'd say Audrey's first road trip was a success! We had a blast, and the boys are already looking forward to going back again. 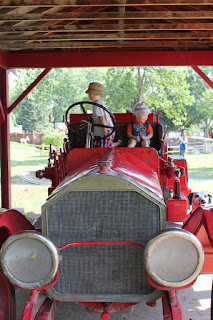 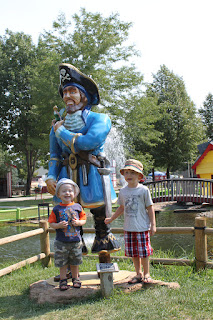 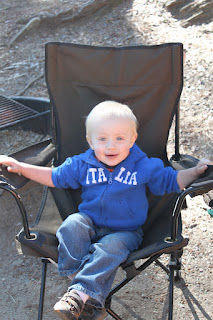 Email ThisBlogThis!Share to TwitterShare to FacebookShare to Pinterest
Labels: family, festivities, friends, out and about