We took a road trip to Fargo this weekend to pick up a new-to-us minivan, and we decided to make it into a mini family vacation. Four hours there, one overnight, four hours back- doesn't sound like a lot of time for fun, but we made the most of it! We stayed in a hotel with a fantastic swimming area, complete with a pirate ship and waterslides (kid-sized, not water park mondo-slides. We're not crazy.) We swam all evening, taking only a short break for a pizza dinner. Now when I say "we" swam, what I really mean is Paul swam with the boys and I sat in a pool chair keeping an eye on the kiddie pool and Audrey. It sure worked for me! Audrey took a couple of dips in the water with her daddy, but she preferred to hang out on the sidelines with me. 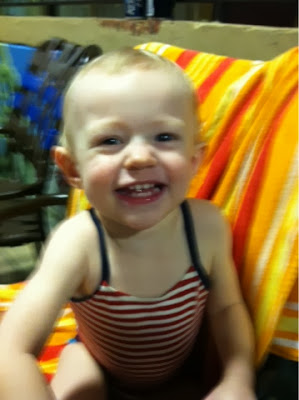 Lucian spent most of his time in the shallow water, and he braved the slides twice! Once at the beginning, when he didn't know what he was getting into, he got jostled around a bit by some bigger kids and was scared away for the rest of the evening. Then at the very end I could see him gearing up for another go. He tried twice, got to the top, then turned around and came back down the steps. Finally on try #3, he worked up the nerve to slide! With a big smile he came out of the water and said, "I'm ready to go back to the room now!" 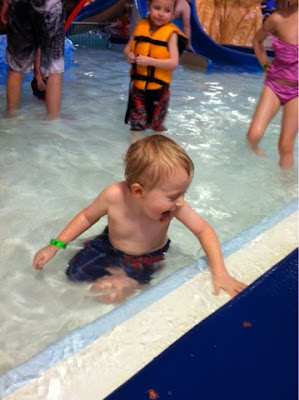 I didn't see Max for most of the three hours we spent at the pool. He was in the deep end with Daddy, swimming, jumping, sliding, and diving. I'm lucky I even snagged this photo of him; he only surfaced to come and ask me (per his father's request) when the pizza was supposed to be ready. This kid was made for the water; I really believe he is happiest when he is fully submerged. He would have stayed for another three hours if the rest of his family wasn't getting tired... but thankfully the novelty of a hotel room was enough to get him out of the water without too much fuss. 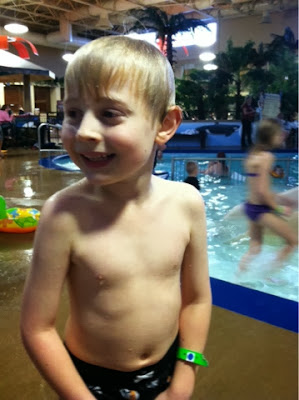 Everyone fell asleep way past bedtime, but amazingly there was not a peep all night. Even when I'm exhausted, I wake up at the drop of a hat, so I was expecting to be in and out of sleep all night with four other bodies occupying the same room as myself. But I closed my eyes and didn't open them again until 8:30 the next morning (Thank you daylight savings time! The "Spring Ahead" rule works wonders for children).

We had breakfast in the hotel restaurant, a buffet that Max claimed was the best breakfast he had ever eaten in his life. Based on the quality of the food, I'd say that atmosphere played a major part in his analysis. We went to Mass at Sts. Anne and Joachim Church, a beautiful new Catholic Church in Fargo, then we met up with my friend Maggie's sister to pick up our van. One unforeseen positive of buying a van from a family with six kids is that it was no problem keeping our children busy while we filled out paperwork. They didn't want to leave!

But we had to leave... so in the early afternoon, we set off for the long drive home with two vans. Since we plan to sell our old van from the Twin Cities, we had to get both cars back to St. Paul. My dear, wonderful, amazing husband made me a deal: if he could drive the new van, he would take all three kids with him. I was left with four hours of just me and baby-in-utero, listening to Public Radio all...the...way...home. It was divine.

We managed to pack a lot of fun into a short trip, and (if we leave out my hunger-induced cranky spells) everyone was in a great mood the whole time! The boys are already asking when we'll buy another van so we can go back to Fargo again.
Posted by Taryn at 10:28 PM

Email ThisBlogThis!Share to TwitterShare to FacebookShare to Pinterest
Labels: adventures, family, out and about