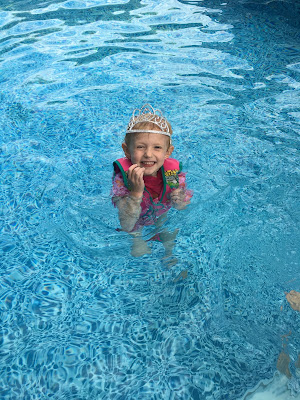 We have a princess in the house! A far cry from her Thomas the Train party for her third birthday, this year it's all about FROZEN. Princesses, tiaras, swirly skirts, the whole shebang is what she wanted. What she got was a homemade Frozen cake, which she helped to decorate, and a plastic tiara to wear while swimming at her pool party. Good enough? Good.

Audrey's fourth birthday was on a beautiful Friday in mid-June, and we celebrated by making a cake for her party the next day, opening one birthday present from her brothers, and having McDonalds for lunch. Paul was leaving for the Grandma's Half Marathon in the afternoon, so we were on our own for the evening and most of the next day. The kids played outside and we had a relaxing day... and I think we probably watched a movie in the evening. Probably a princess one that Audrey chose. (I'm not going to apologize for my lack of memory!) 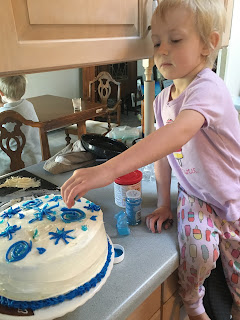 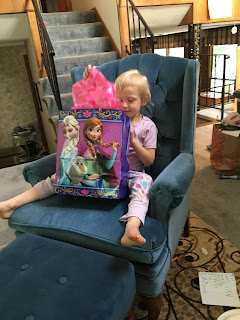 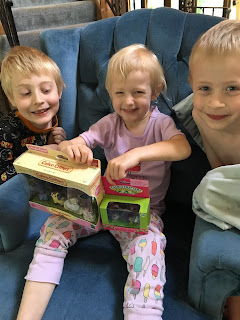 In the morning we got up right away and went out for donuts at our favorite stop, Granny's. We walked into the donut shop and what did we find? A clown making balloon animals! Now, if you're not familiar with Granny's, this is about the last thing I expected in this little hole-in-the-wall hidden gem. But apparently just for Audrey's birthday, they pulled out all the stops! She was in heaven.
We then got all packed up and headed down to Grandma and Grandpa's for the big birthday party! When asked who she wanted to invite, she told me, "Gianna and Josie and my cousins and all my grandmas!" which is (almost) exactly what she got! Gianna and Josie, her two little friends, came with their families, her cousins came, and so did two of her great-grandmas! The only grandma missing was Grandma Yantes, but thankfully we got to celebrate with her in Rapid City a few weeks later. And Uncle Patrick did an OK job of filling in the gap.

It doesn't sound like a long list of attendees, but when you count up all the children in all of the families, we had 13 kids at the party! It was a little crazy... especially seeing as Edith decided that that day she would suddenly become completely fearless around the pool. And decide not to nap. I spent much of my time trying to keep my youngest child alive, and my mom had to take over a lot of the meal preparation that I had planned to do while my afraid-of-the-water two year old was napping. Ah well. She's a saint, and she took it in stride (thanks a million, Mom!)

Paul arrived with Patrick and Anne in the late afternoon, just in time to grill up hot dogs for the hungry masses. Everyone piled out of the water to eat, and then piled right back into the pool after cake. Audrey was super brave, tooling around with her life jacket and a pool noodle... I think she wanted to be in on all the action, but she's still a little small to play water games with the big boys. She made a rule that there would be no battling at her birthday party, so her brothers and the boys had to put aside their Star Wars games for the day.

All in all, it was a successful party! Audrey had a blast, and that's all that really matters in the end. My sweet little girl with the big personality is getting bigger by the day! I'm so thankful for her. 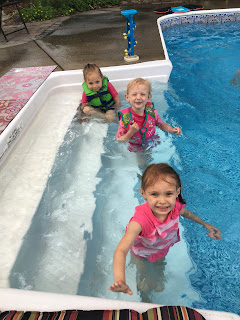 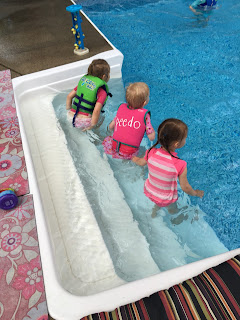 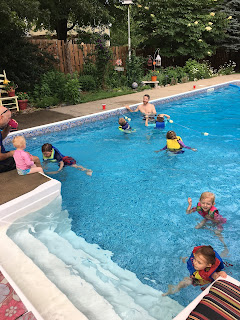 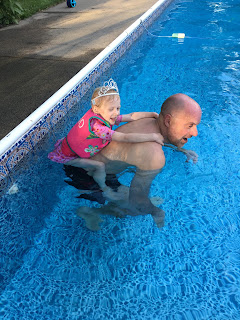 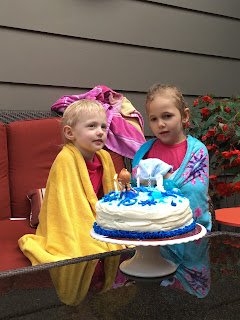 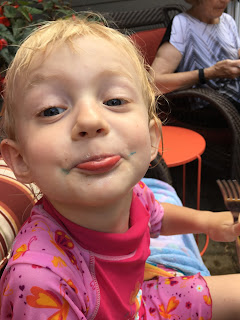 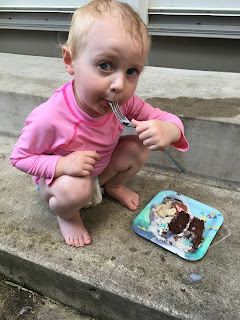