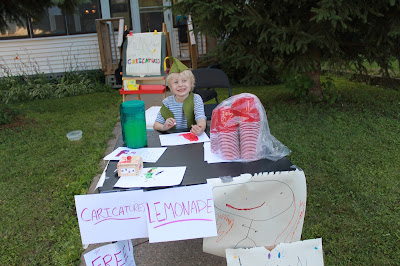 Lemonade! Get your ice cold lemonade! And while you're at it, why not have the in-house artist draw your caricature for you? And best of all, the whole shebang is free! All donations go to Feed My Starving Children (not my starving children personally, as one customer thought!) 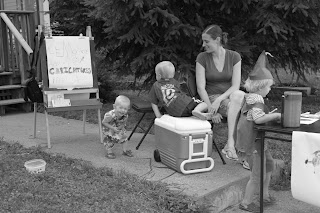 Last Friday was a beautiful day for a lemonade stand. Hot enough (until the sun went down) to entice people to buy lemonade, but cool enough in the shade that we were completely comfortable. We set up our stand during the Smith Avenue Art Crawl, hoping to attract some of the increased foot traffic near our house. Turns out, the foot traffic really didn't increase at all... but we live on a busy road so there's always someone walking by anyways. 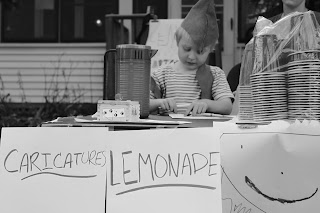 Max ended up with four caricature customers, a decent handful of lemonade customers, and a lot of donations. He was determined to give his wares away for free, so my dad (knowing that people want to be generous toward a five-year-old in a Peter Pan costume) suggested donating to Feed My Starving Children, since Max recently packed meals there with our church group. He jumped on that idea, and now we are very excited to deliver our neighborhood's donations! 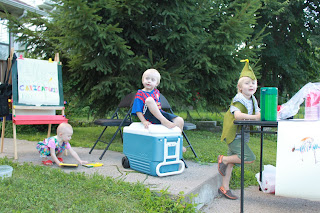 While the whole project was spearheaded by Max, the other two helped out however they could. Audrey tried to eat markers and grab red plastic cups (she was obsessed with them!) Lucian was the ice-scooper... and often the lemonade pourer, since his big brother had a bit of trouble staying on task when there was a new conversation partner standing right in front of him! We had to train Max not to chase people down the street when they turned down the offer of lemonade. Oy. 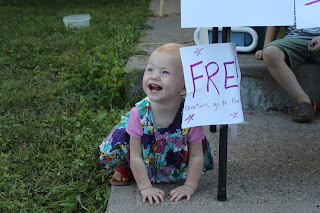 Friday evening was so successful that we set things up again Saturday afternoon. My parents came up to have their caricature drawn, and Max put his all into that one. My dad was wearing a hat, but his caricature had to have a stubbly bald head. Of course. And Grandma's hair had some killer volume! 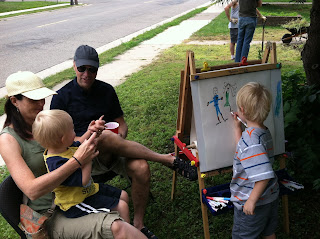 Attention spans were a little shorter on Saturday; we stayed open for only about an hour before making our own visit to the Art Crawl. All in all, though, I would say it was an awfully successful venture! It was a lot of work, and don't ask me to do it again soon, but I think I might have even had some fun too! 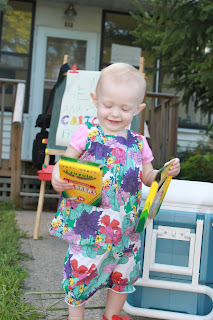 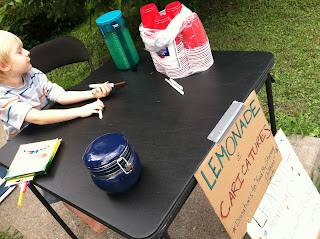 Email ThisBlogThis!Share to TwitterShare to FacebookShare to Pinterest
Labels: adventures, at home, Max