I Want To Ride My Bicycle

We took advantage of a beautiful evening last week to check out a bike path by the river. Max has taken a major jump in his biking ability this summer; he plugged away like a pro while I strolled along behind him with Audrey. The only problems came when he noticed how beautiful the scenery was ("Mom! It looks just like a jungle! Doesn't it look exactly like a jungle?!") and rolled straight off the path into the brush. No harm done; in fact, I think he might have done it on purpose at least once, to give him an excuse to briefly explore on foot. It worked out fine, because Lucian and Dad were slowly making their way behind us. That kid has some perseverance and determination, let me tell you! His bike was not made for distance, and his training wheels are getting a little lopsided in their old age. But he kept it up the best that he could with the help of his Daddy.

Poor little Audrey had to sit in a stroller while her big brothers wore awesome helmets and pedaled these super cool wheeled contraptions. She kept her eyes glued on whichever brother was in front of her, and if we happened to take the lead she would crane her neck to get another glimpse of those wheels! So when we stopped at a scenic overlook to take in the view, she would have none of it until she got to take a spin too. 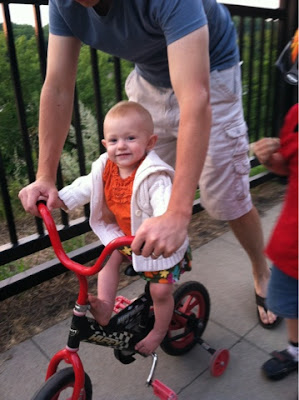 The boys thought it was a hoot seeing their little sis on a bike, and I think that girl would have ridden all the way back to the car if Daddy's back could have handled it! 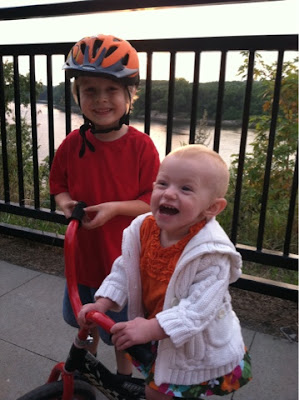 We got back to the car about five minutes after the mosquitoes came out in force... one moment we were fine and the next we were surrounded by a cloud of hungry buzzing bugs. Ick. But besides that slight hiccup, we had a great time! (And boy... do I have some cute kids or what?) 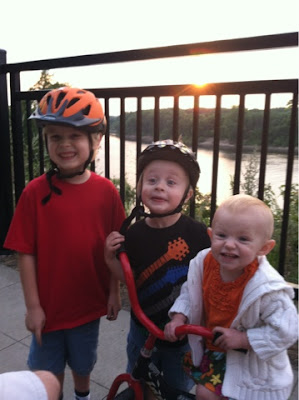 Email ThisBlogThis!Share to TwitterShare to FacebookShare to Pinterest
Labels: adventures, family, out and about