Oh what to say? Four of my very favorite people just flew across the ocean away from us again. The boys and Catherine were here for a month, and I was getting pretty darn used to seeing them whenever I wanted. The last week of their visit, after Tony had joined them and we returned from South Dakota, we spent pretty much every day at Grandma and Grandpa's so the cousins could get to know each other. This was the first time they had seen each other in a year and a half, and it was certainly the first time they have actually played together.

Max and Alexander had some important chats over their coloring book, and it was such a joy to hear them really talking to each other!  Zander is verbal beyond his years, so he kept right up with Max in conversational ability. 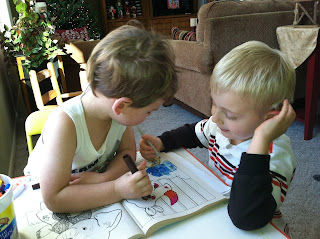 Alexander and Lucian are only six months apart in age, and they share a love of all things music, especially the Okee Dokee Brothers, guitars and banjos. We were serenaded time and again by the dynamic duo; my dad is hopeful that he has the makings of a band to rival the Radecki Family Band from my childhood. (Yes, back in the day, yours truly played some high-profile gigs at church auctions, YMCA events, and fundraisers. If you want my autograph, just ask). I think the boys will be ready to go on the road as soon as they can strum a real chord! 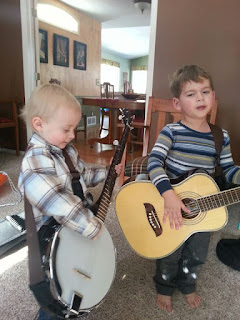 The four boys were in heaven playing games with Grandma, and I don't think she minded too much. My parents take this grandparent thing to a whole new level... they'll do anything for their grandkids! I think by the end of the visit they may have been ready for a little break (having five kids five-and-under in the house nearly full-time might do that) but you wouldn't know it by looking at them. They were going strong til the last. 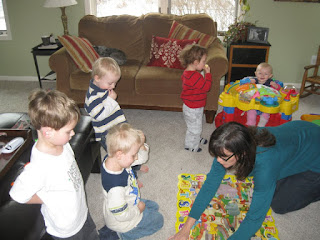 We took the kids to the train museum in St. Paul with Great Grandpa, and everyone was enthralled with the exhibits. After watching the trains for awhile, we went to the Como Park Pavilion for a snack and a little exploring. Funny how it takes visitors from Austria to get us out into our own neighborhood! Lucian and Isaac had some nice moments together throughout the trip; they are both a little more laid-back than their older brothers, so even though there is quite an age difference, I think they really enjoyed each other. 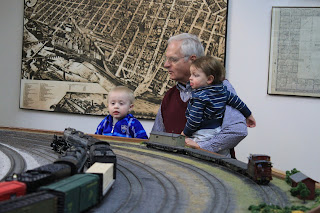 Alexander fell head-over-heels for Audrey and just couldn't get enough of her! Every time he saw her, he wanted to shower her with affection. That girl... for now, she's the center of all sorts of positive attention. But just wait, little one. With four boys above you, there are all sorts of shenanigans to come! 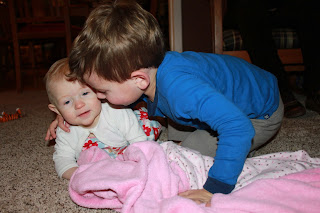 Tony and Catherine, thank you for sharing so much of your time with us. I know that traveling is not easy, and being away from home for so long wreaks havoc on little bodies. A seven hour time change is hard enough on the most seasoned travelers, I can only imagine what it does to kids! But you did a beautiful job and you are wonderful parents. We miss you terribly, and we hope that someday we will meet you at the airport for a homecoming rather than just a visit. Until then, Max, Lucian and Audrey will try to wait patiently for the next chance to play with their cousins!

Email ThisBlogThis!Share to TwitterShare to FacebookShare to Pinterest
Labels: family, out and about