Having a child born on Christmas always presents a challenge: how and when and how often do we celebrate the day? It's something we juggle every year, and generally Max ends up getting at least two separate birthday celebrations. This year, we celebrated with his friends on the anniversary of his baptism, January 19. And wonder of wonders, there was not a pirate to be found! Max chose a knights and castles theme for his party, and I can't tell you how excited I was to buy crepe paper that wasn't black.

His friends showed up and were given a glow sword and a cardboard shield, which they decorated until the pizza arrived. Everyone filled up on pizza to prepare for the quest ahead of them: they had to complete three tasks in order to earn the title of Knight. 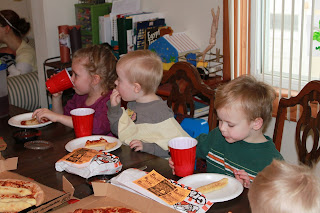 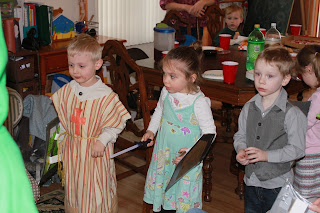 First, they crossed the swamp, making sure to touch only the "rocks".

Then they threw a ball to knock over a troll and cross his bridge. 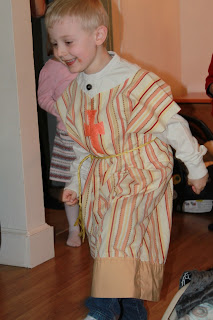 Finally, they had to sneak up on a sleeping dragon (Uncle Liam) and steal one of his scales without stepping on the tissue paper that surrounded him or making any other noise.

When the tasks were successfully completed, the knight-hopefuls gathered in the throne room to be knighted by King Paul the Second and awarded with a certificate of knighthood by Queen Taryn. The Knighting ceremony was followed by a celebration with cake and ice cream in honor of Prince Maximilian! 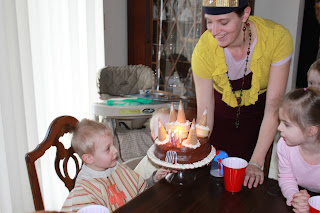 I know I say this each year, but five sure seems like a big milestone. It was five whole years ago that we all gathered at Blessed Sacrament Church to welcome a tiny new baby into God's family, and look at how he has grown since then! He's ready to take on the world, slaying any dragons that come his way. God bless you, my Maximilian! 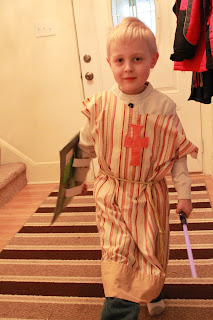 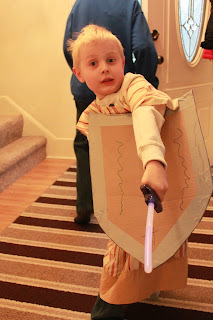 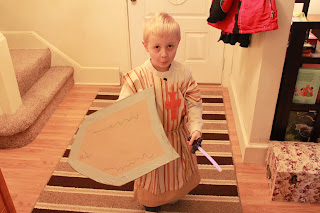