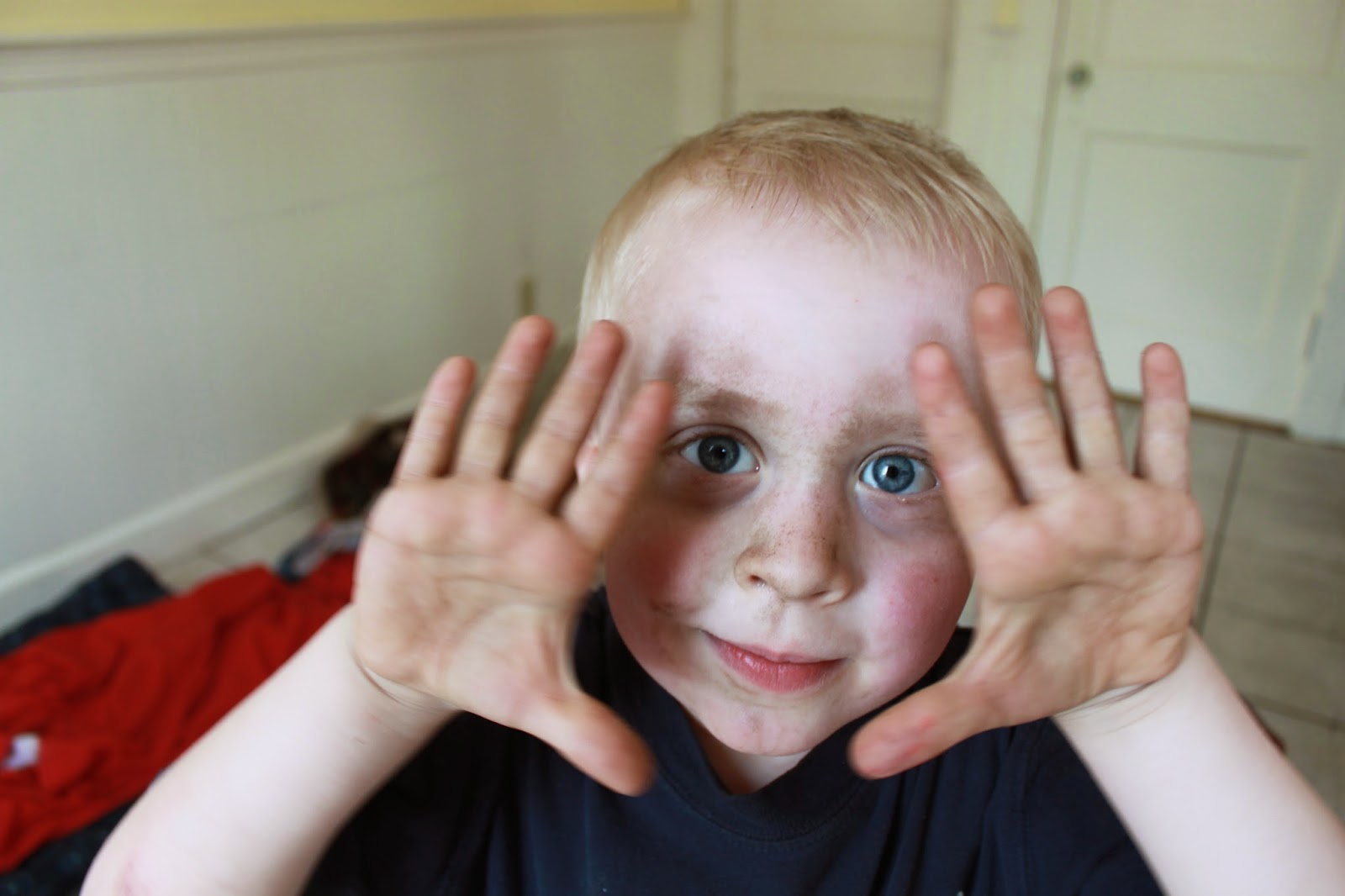 Kelley and Tim's house: a kid's dream come true! We had lots of plans for the time we spent with them, but even if we had simply stayed home every day, our kids would have been perfectly content. We arrived late at night on Tuesday and basically put the kids straight to bed. Both Kelley and Tim had to be up super early to work on Wednesday, so we tried to let them get to sleep at a decent hour.

In the morning, the boys went to explore the yard. And oh what a yard! Tim is a stonemason, so their property has lots of cool rocks to check out. Plus there is a river to throw rocks into, a path along the back of the property, dirt to dig in, and two awesome dogs to play with. Loki and Shay were a hit from the first moment the kids saw them. We were a little concerned about how Audrey would do around dogs bigger than she was, and it took a few days, but she fell madly in love with them!  She still talks about "Lookie-Say!" every time she sees another dog. Max loved to throw balls for them and run around in the yard with them, and Lucian just wanted to be near them. I think we have some animal lovers on our hands. 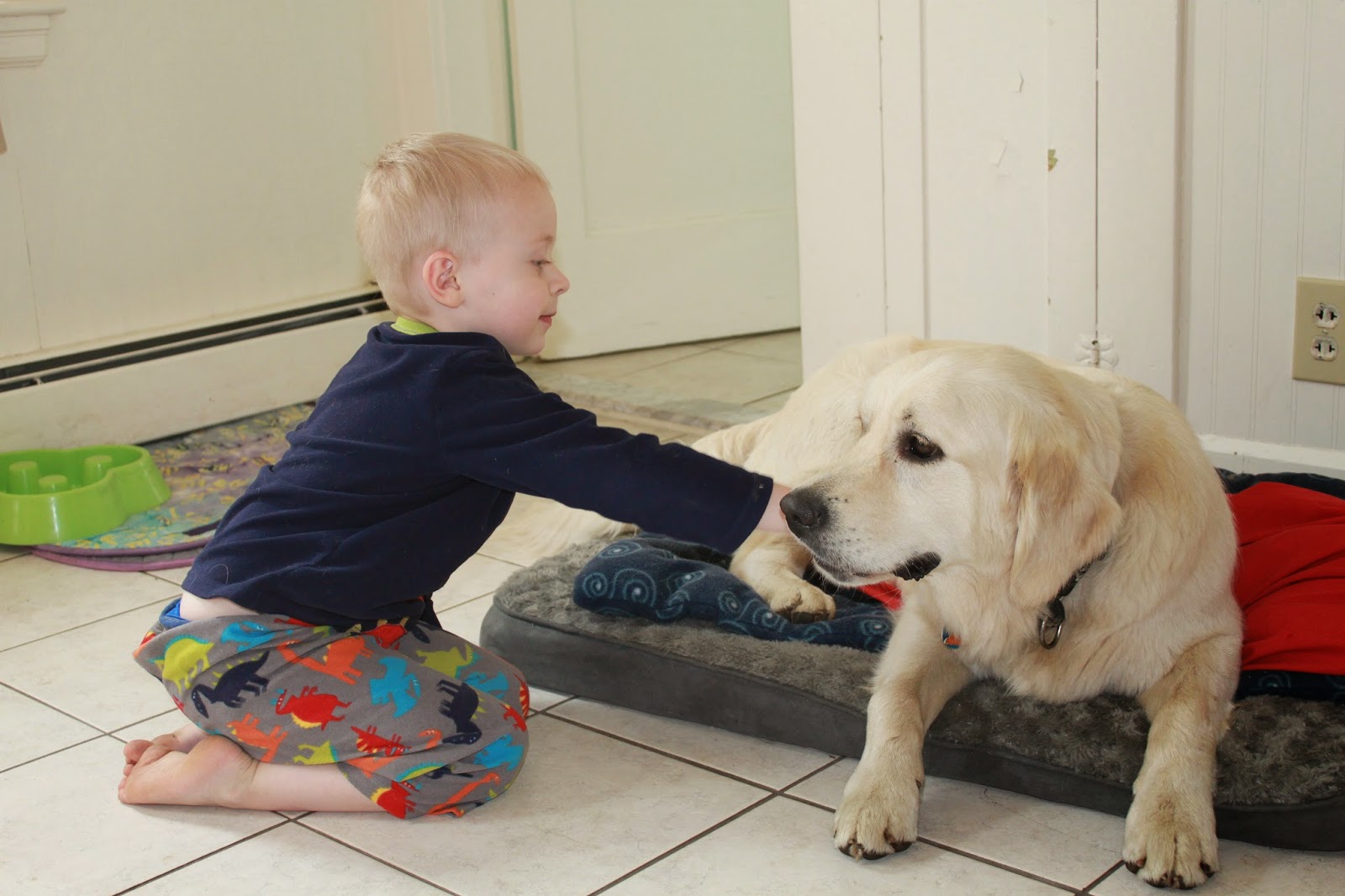 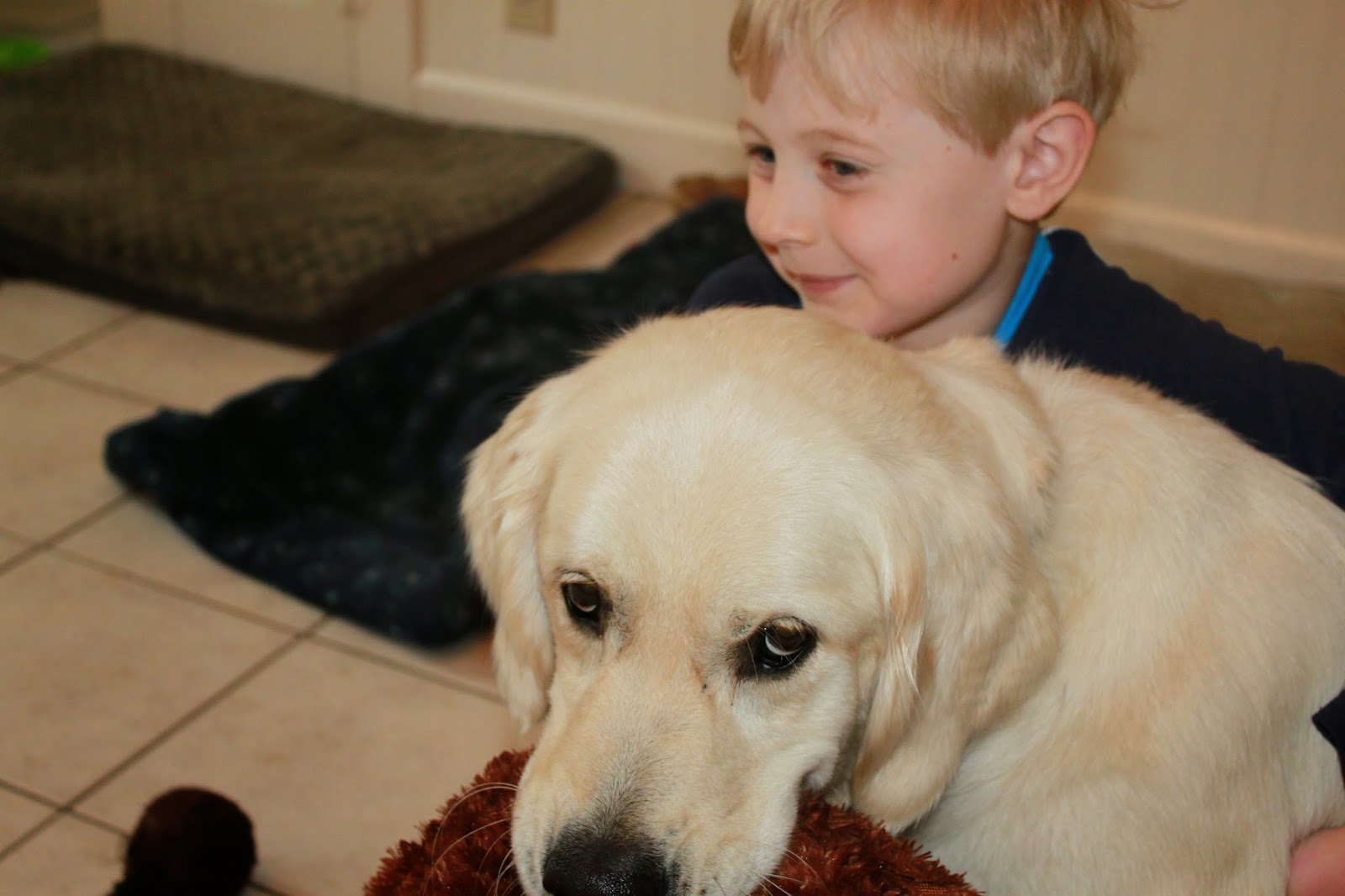 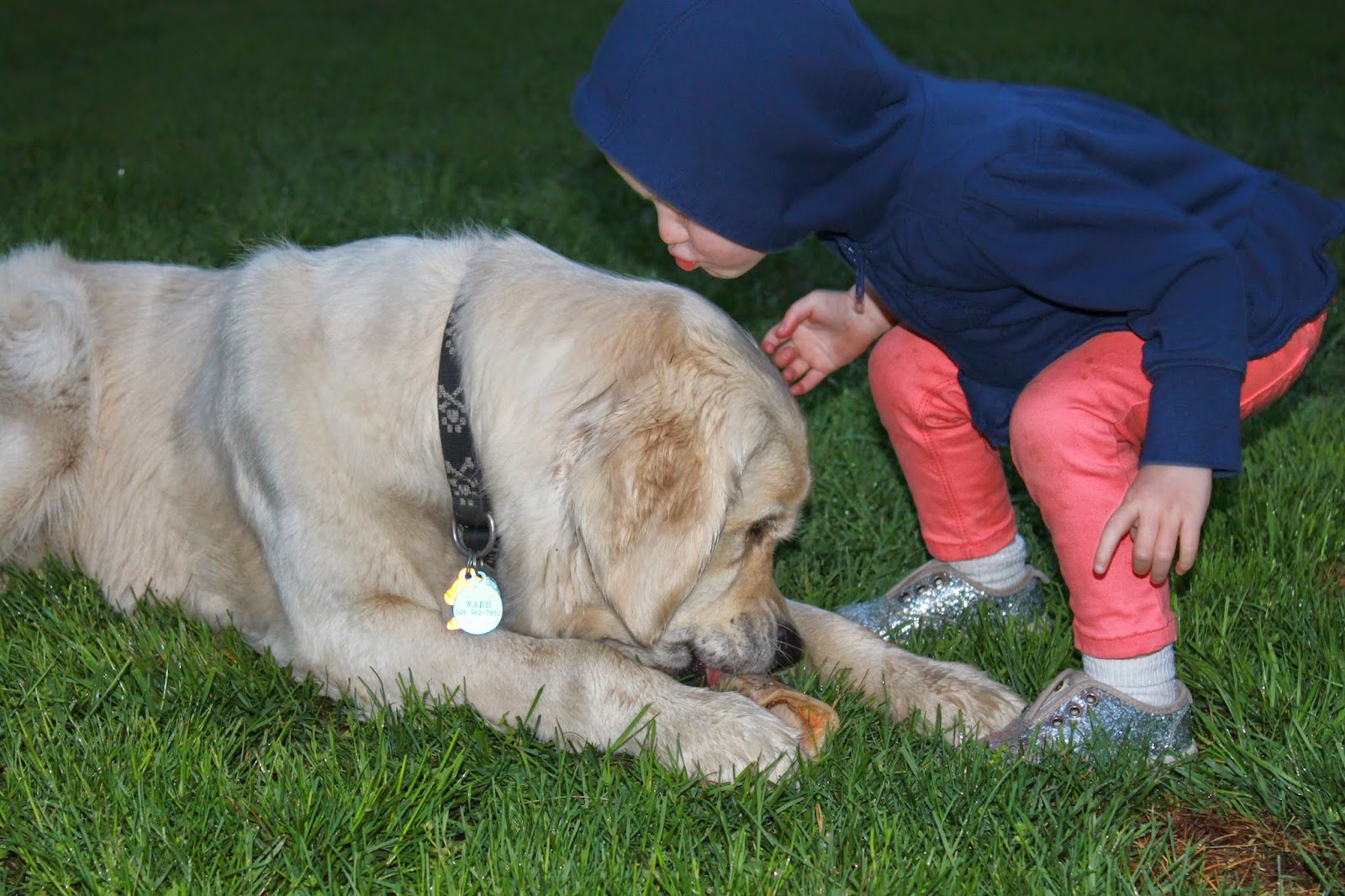 The kids all got the chance to ride a donkey named Tuxedo, and boy did they love it! They were led around a field in turns, then they got a chance to lead Tuxedo themselves. They pulled him along, attempting to lead him to fresh clover. But when he was done walking, he was done. 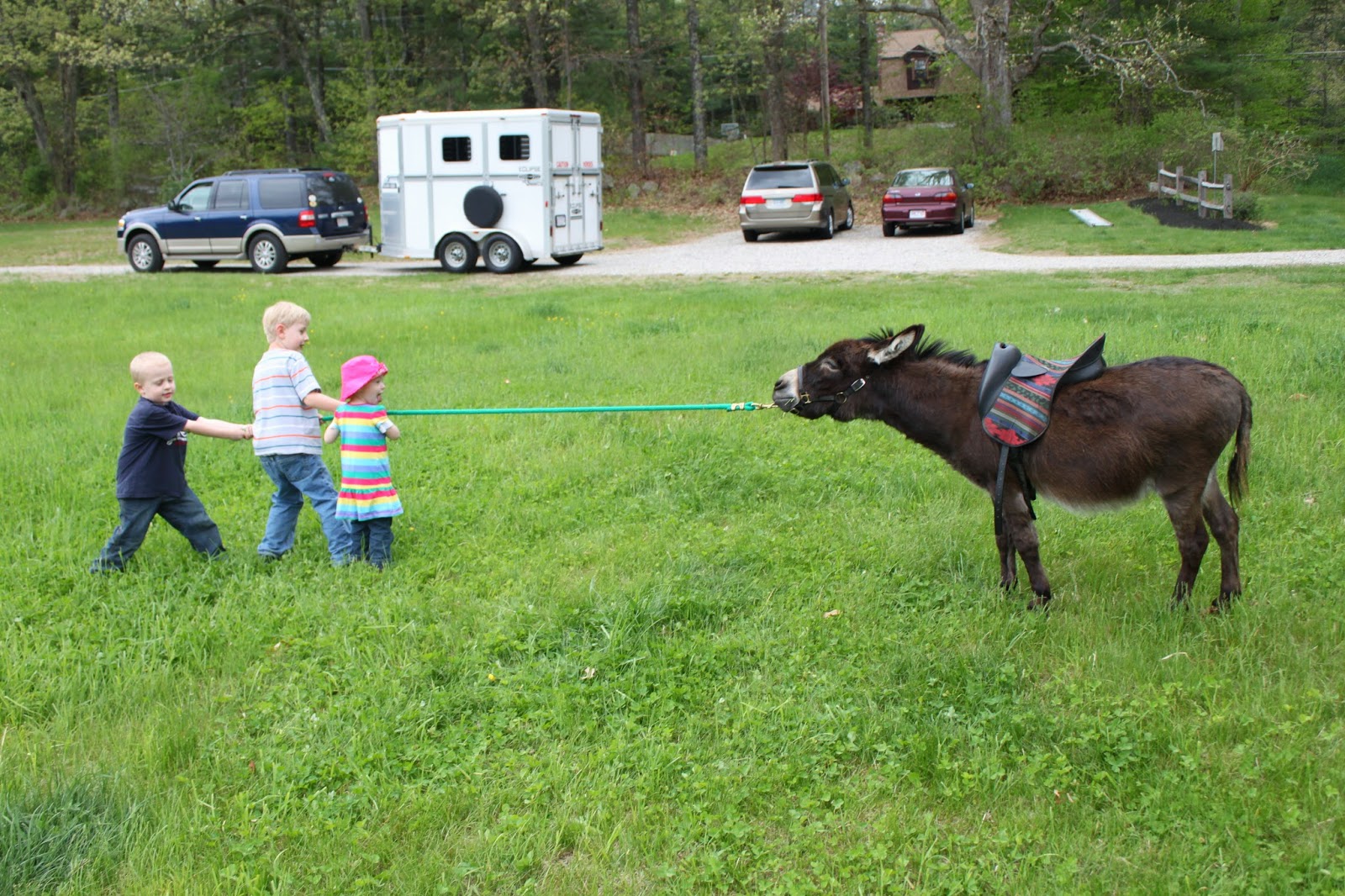 Another highlight included Hibachi Grill with the whole clan. Eating out with our three children is something we generally avoid, but with so many adults around it was pretty stress-free on this trip. The best dining experience for the kids was, by far, Hibachi. Flames, food flying, a hilarious chef, what's not to love? However, the chef's repeated refrain of "More Sake, more baby!" as he squirted sake into the mouths of the adults wasn't something I wanted to explain to my curious 6-year-old son.


The time flew by full of ice cream, dogs, drawing, playing, and especially family. Megan even made the trip up from New York to spend some time with us! We visited downtown Boston (which deserves its own post) and spent a weekend in Maine (more on that later as well). I loved getting to know Tim better, as this was the first time we had spent with him and Kelley alone. Let's just say Paul and Tim have a lot in common in the whiskey department!

I am so excited to see Kelley as a mom, and I was glad to be able to be with her at least for a little part of our overlapping pregnancies. I can't wait until the time the two cousins get to meet!

Thank you for inviting us into your home, Kelley and Tim. We loved every minute of our visit!